The Top 10 Quotes from Friday Night's 'Mistaken For Strangers' Panel 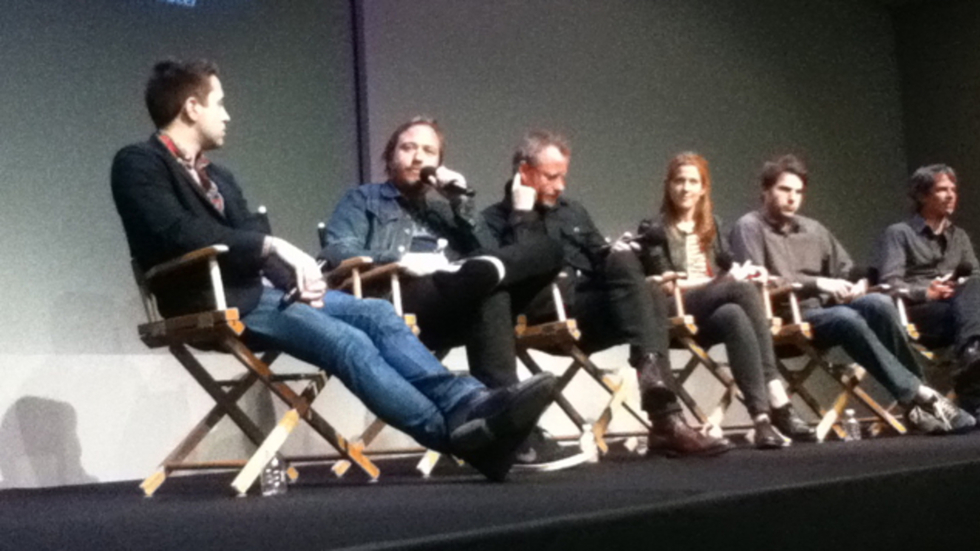 On the first day of our "Meet The Filmmaker" talks at the Soho Apple Store, we hosted the filmmakers of TFF 2013's opening night feature Mistaken for Strangers. We welcomed director Tom Berninger, The National lead singer  Matt Berninger, Executive Producer Marshall Curry, and Producers Carin Besser and Craig Charlin. The group anwered both moderated and audience-sourced questions about everything from the filmmaking process to Matt's musical style. We've collected ten of our favorite quotes from the evening for those of you who couldn't make it out (and don't forget to come out for the rest of our Meet The Filmmakers series!)

"He's making a film that could ruin my rock band and I'm paying him to do it."

Tom Berninger talks about on using the film to change the public's image of The National:

"The press they always get is that they're a somber, dark, and moody band. And if you know these guys, they're not."

Matt Berninger on the family getting Tom motivated to create the film:

"Mom would always send him these clips about the band that said I was the only one without a brother. You had a bit of a chip on your shoulder about never being mentioned."

Veteran filmmaker Marshall Curry on getting involved with the film:

Matt discusses the ups and downs of working with his brother:

"To be perfectly honest it was a really difficult collaboration, because he's making a film that could ruin my rock band and I'm paying him to do it."

Tom jokes about his future plans:

"I don't know why Hollywood hasn't tackled the Johnny Appleseed story. So I just need about 400 million dollars to tackle that.”

Producer [and wife of Matt Berninger] Carin Besser on the turning point in the filmmaking process:

“When is this more than a home movie? And there was a turning point where Tom went and interviewed his mom and dad. And they talk about what makes him different from his brother. And, as a mother, it was like: what sort of impact do we have on the future of our child?”

Matt explains his famous penchant for diving into crowds during concerts:

Tom reacts to the finished product:

“Anyone who's made any shorts or any movies knows that it never turns out the way you thought it would, and this is the epitome of that.”

Matt on how making the film has influenced The National’s upcoming album Trouble Will Find Me:

“To see him be so courageous with his ugly moments and his dark moments. And I think this record is the most emotionally unguarded. I think a lot of that had to do with Tom.”

If you want to catch Mistaken For Strangers, make sure to get there early and line up for rush tickets (all advanced tickets have been sold) and check out the trailer below!