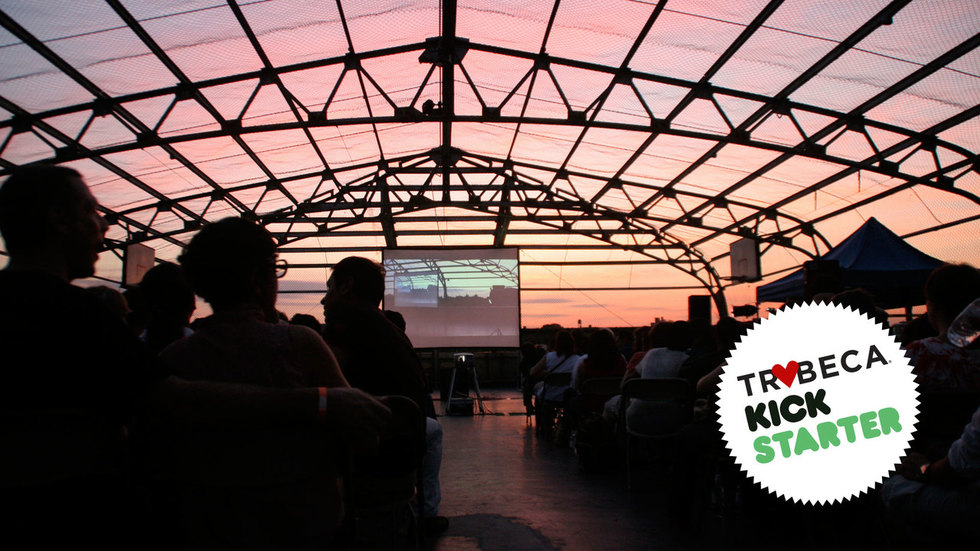 To better understand Rooftop Films' specialness, look at what Tarantino is currently doing with the 70mm "roadshow" release of his eighth movie, The Hateful Eight. The film-print-obsessed director has put together an extended version of his claustrophobic, Agatha-Christie-esque, and not-unlike-The-Thing western that'll only be shown on screens equipped to handle the 70mm format's wide-lensed and anti-digital beauty; the roadshow version includes an "Overture" scored by the great Ennio Morricone and a 12-minute intermission. It's a cinematic experience you'll never have at home or by watching a movie on an iPad or a cell phone. Tarantino has ensured that The Hateful Eight's coolest version is made exclusive to people who, like him, miss the days when theatrical movie-watching was a religion impervious to tech-savvy millennials.

For the last 19 years, Rooftop Films has been pushing that same religion. They, too, have brought the magic back to seeing movies in a public, non-couch or bedroom setting. Every summer, all of the non-profit organization's screenings take place on rooftops and at other outdoor venues throughout Brooklyn and Manhattan. Rooftop's programmers handpick the year's strongest new indie flicks—most of which have by then already premiered at the Tribeca Film Festival (this year, Rooftop screened the award-winning Men Go to Battle), Sundance, or SXSW—and presents them at NYC locations like Brooklyn's Industry City, Manhattan's Solar One, and Brooklyn's The Old American Can Factory, complete with post-screening filmmaker Q&A's and scenic afterparties.

As anyone who's ever made a single transaction in NYC knows, though, the city is a real bank-breaker. With the five boroughs going through real estate upswings and neighborhood transformations, the city's prices are constantly rising. Rooftop Films isn't immune to those financial burdens. Heading into 2016, Rooftop is hoping to blow out their festival and make the 20th edition the biggest one yet, but they need generous cinephiles to show some monetary love.

Rooftop Films recently launched a Kickstarter campaign to help fund next year's program. Their goal is to reach $45,000 by Thursday, December 31, in order to preserve the series' established integrity, stretch out into "culturally underserved communities like the South Bronx and Staten Island," and continue supporting DIY filmmakers with their Rooftop Filmmakers Fund Grants. To show their gratitude, they're offering some pretty sweet rewards, including Spectre posters signed by stars Daniel Craig, Christoph Waltz, Monica Bellucci, and Léa Seydoux, and Goosebumps posters autographed by Jack Black. (Both rewards are for pledges of $200 or more.) On the cheaper end, they'll hook up two free Summer Screening tickets and a digital download of either Nasty Baby, directed by Sebástian Silva, or Joe Swanberg's Digging for Fire for a mere $35 donation. (Learn more about the rest of Rooftop's Kickstarter rewards here.)

For movie lovers, there really isn't anything else in NYC quite like Rooftop Films. Consider this: During this year's edition, the hip-hop fashion documentary Fresh Dressed screened directly above the same Brooklyn streets on which the culture's street style came of age three decades ago. While that's not exactly a 70mm roadshow, it's definitely more special than merely ordering Fresh Dressed via iTunes. Thanks to Rooftop Films, New Yorkers were able to see Jenkins' movie in its best-possible and most authentic setting.

Something tells us that if Quentin Tarantino could somehow show The Hateful Eight to a couple-hundred viewers on the roof of the movie's fictionalized, Wyoming-located Minnie's Haberdashery set, he sure as hell would. Don't miss out on your chance to keep that experiential possibility alive for future indie movies in New York City.

To support Rooftop Films, head over to its Kickstarter page and donate. And once you've done that, check out (and back!) other Kickstarters we love here.