Home » Tribeca News » In TANGERINE, Trans Cinema Takes a Major Leap Forward With Nothing But an iPhone
View All News

In TANGERINE, Trans Cinema Takes a Major Leap Forward With Nothing But an iPhone

How a New Yorker managed to shoot a wild comedy about transgender prostitutes in Hollywood with a cell phone.

Most people use their smartphones to take duckface Instagram selfies and hook up with fellow Tinder users. Indie filmmaker Sean S. Baker, however, made one of this summer’s best and most buzz-worthy movies on his.

But Hollywood's film industry wasn't what Baker saw everyday outside his window. "When I first moved to LA, I was struck by how little of the city has actually been shown in film and television," says Baker, 44. "Being that LA is the center of the industry, I was really taken aback by that. I realized that every time we think of LA, we think of the Hollywood sign, we think of the Walk of Fame, we think of Beverly Hills and we think of Venice Beach, and that’s basically it. There’s so much more of that city, though."

Baker was particularly fascinated by Donut Time, a little mom-and-pop doughnut store located on the corner of Highland Avenue and Santa Monica Boulevard. It's a cinematically uncharted territory where hookers loudly chat each other up on the block, taxi drivers pull into back alleys for oral sex and pimps handle their business while eating crullers. "I don’t know what it is about me, but I’m always drawn to the edgier parts of town," says Baker. "You couldn’t pass the intersection of Santa Monica and Highland without noticing that there was always some activity on that corner—there was always something going down. It was basically an unofficial Red Light District. I couldn't understand why I'd never seen a story take place there. I knew we could find one there."

Acting on that hunch, Baker and frequent co-writer Chris Bergoch visited a nearby LGBT center and met an aspiring transgender actress named Mya Taylor, who quickly introduced them to her friend/roommate/fellow transgender woman Kitana Kiki Rodriguez. Soon after, Taylor and Rodriguez told Baker and Begoch a story they’d heard about a trans woman who found out her boyfriend had cheated on her with a biological woman and went on a warpath throughout Los Angeles to find both her heartbreaking lover and his "actual fish," their term for a biological female. And with that anecdote, Baker and Bergoch had the central plot for what would become Tangerine. Eight months' worth of research and interviews with Taylor and Rodriguez later, they were ready to rock.

There was just one problem, though—they didn’t have enough money to shoot the film traditionally. That's where Baker's trusty iPhone 5s came into play. Using three separate iPhones, Baker was able to shoot Tangerine with first-time actors Rodriguez, playing the cheated-on prostitute, and Taylor, as her loyal best friend, over 23 days early last year. To give the project a cinematic look, he downloaded the $8 app Filmic Pro, which adds a grainy texture over the phone camera’s otherwise lo-fi image, an anamorphic adapter lens to enhance the visuals and a Steadicam to prevent the camera operator’s shaky hands from disrupting the phone.

"Believe me, I didn’t think it would work at first, and I wasn’t exactly proud to have gone from shooting Starlet like a real movie to making an iPhone movie," jokes Baker. "But what started as a financial necessity quickly became an advantage, especially with Mya and Kiki. Usually, non-actors are nervous in front of a camera for the first few days, but since it was just a phone, they barely even noticed it."

When Tangerine premiered at this year's Sundance Film Festival in January, it turned heads and suddenly became known as "the iPhone movie," but marginalizing the film that way is a huge disservice. It only takes a few minutes to forget that you're watching Smartphone Cinema (™) and simply get caught up in the story. Rodriguez and Taylor have charisma to spare, and Baker presents their hilarious, high-octane and sex-and-drugs-fueled LA odyssey with the same sonic energy and eye-popping colorfulness Harmony Korine gave to Spring Breakers. Behind Tangerine's eye and ear candy, though, there's an uncompromising honesty and a subtle brutality. Its protagonists are transgender prostitutes of color, and although the film is a riotous comedy, Baker doesn’t shy away from how close-minded others treat the women.

Tangerine is a major leap for both indie filmmaking, via its iPhone aesthetic, and progressive storytelling, with how it gives two transgender women the chance to lead a high-concept genre film instead of another traditional documentary about their world. Here, Sean Baker gets in-depth about the latter point.

Comedy as a Defense Mechanism
"Whenever I'd interview Mya and Kiki and hang around some of the other women while they were working the streets, I saw firsthand how they use humor defensively. That's something we all do, right? We all use humor to get by, and we use humor to cope, but these women are using to an even greater degree because what they're going through is a lot tougher than what most people go through. I'm talking specifically about transgender women of color who have basically been forced to resort to sex work because of the incredible amount of discrimination and oppression that they’ve had to put up with."

"I've been out there talking to these women and it's almost like watching a stand-up comedy routine. They are incredibly funny and incredibly witty. There's a scene early in Tangerine where three women are on a street corner having this really funny conversation, and it’s completely improvised. I wish I could have included all ten or so minutes I shot with them while they were dropping all of these amazing one-liners about each other and about their situations. I realized that their humor was coming from a defensive place. They use it against anyone who may be thinking certain things about them, to beat whoever's around them to the punch with whatever they may say or think, and it's also used as a way of coping with the fact that they have to be defensive in the first place."

The Authenticity of Humor
"All of my other films—even Take Out, which is pretty heavy—have humor. Most of the humor in those films is subtle and comes from human interactions. Honestly, I was about to go down that road again with this film, but then Mya Taylor told me something early on that sort of dictated where we would go and opened up it more towards a full-out comedy. She watched my other films and started to understand my sensibility and trust me, so she said, 'I'll make this film with you only if you promise me two things: one, that you will make this as realistic as possible and show the brutal reality of what these women have to go through out on the street, and, two, I want this to be a laugh riot.' I was like, 'What the fuck are you asking me?'" [Laughs.]

"That can be a dangerous balancing act in the current state of things where political correctness is really under a microscope. I'm a straight cisgender male from outside that world, so that could be perceived in a way that's disrespectful. But then that's all I thought about for several days, and I eventually realized that Mya is right. If you don't handle it properly, it could be condescending to approach this world in another way. If we're laughing with our characters and participating in the chaos of that day, and not laughing at them, we'd make a film that the women who actually work in that area could enjoy. It would be entertainment for them as well. A film about this subject matter can become too anthropological or observational from a distance; the films that have taken that from-a-distance approach have run the risk of being condescending to their subjects. Mya was asking me to not just observe their world from a distance but to come into it."

"I had to remember that we were making a narrative feature film, and not a documentary. I wanted an audience to connect with our characters through universal themes, even though they may not even know this world exists. That was part of the goal. The other part was that if you’re empathetic enough with these characters, you can then take it upon yourself to do the research after you see the film and watch some of the wonderful documentaries about this subject. I've seen almost every documentary on the subject, and those films have the information and the statistics that are required to make change happen and help these women."

"I know that some people will not like our approach to this world, but in the end the only people I'll have to answer to are Mya and Kiki."

Tangerine opens in limited release this Friday, July 10. The film's New York City locations and weekend showtimes are as follows: 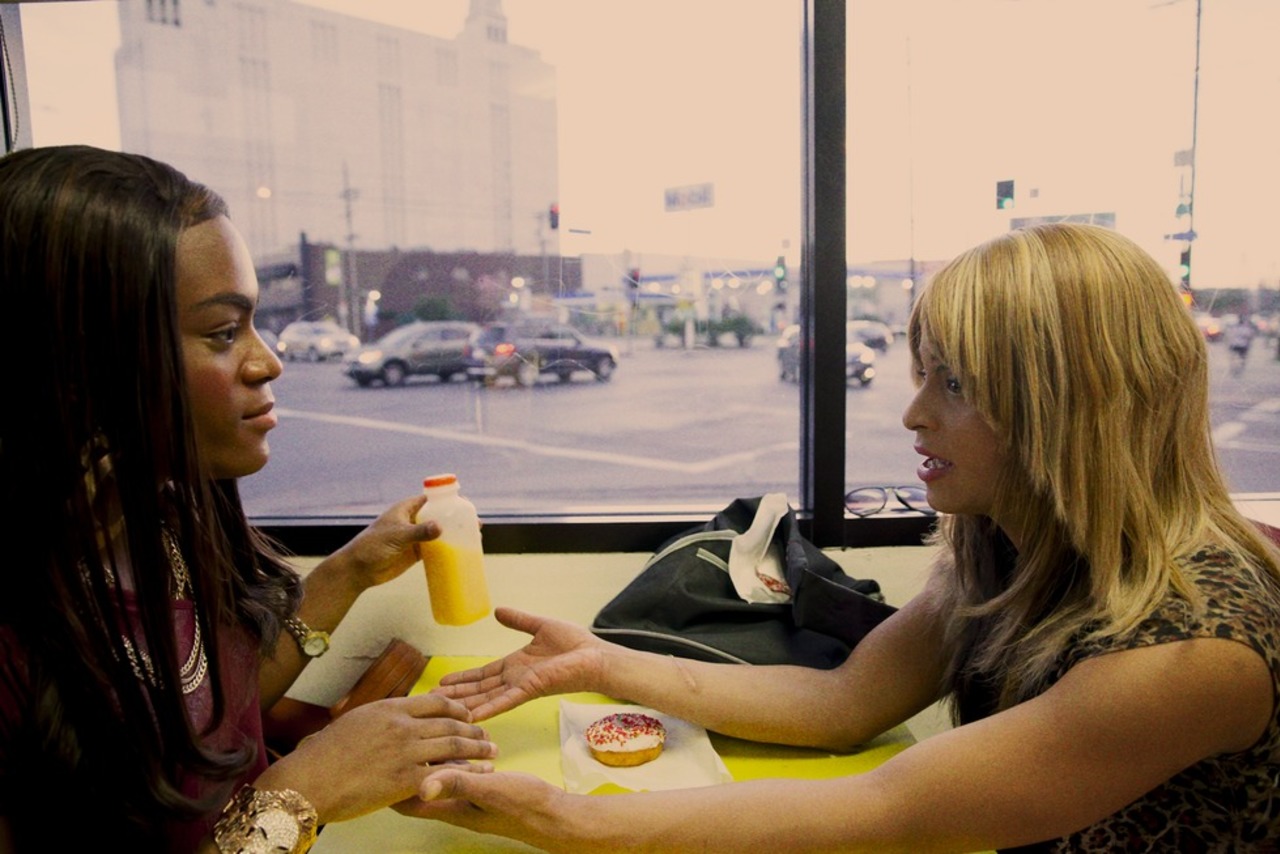 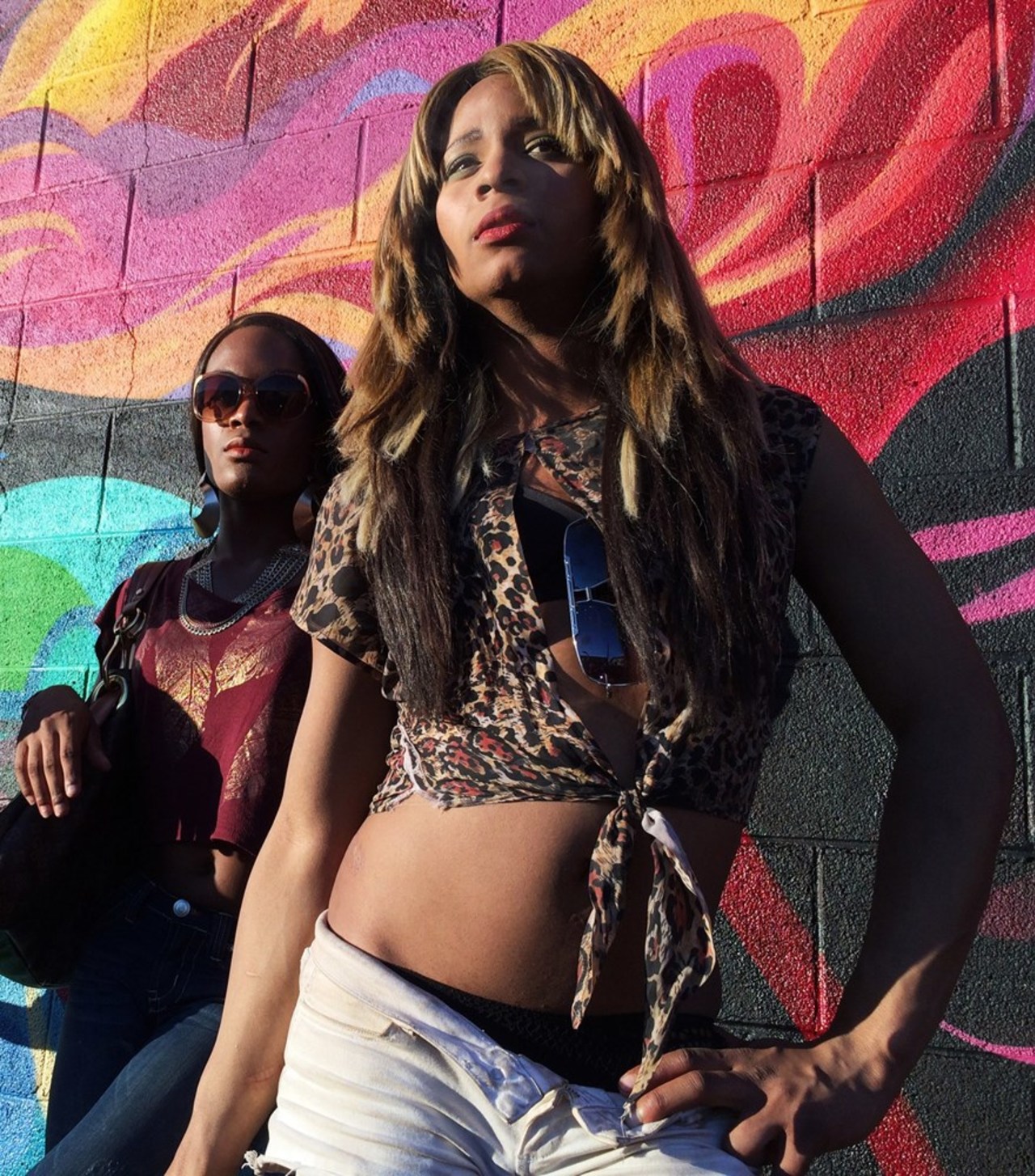 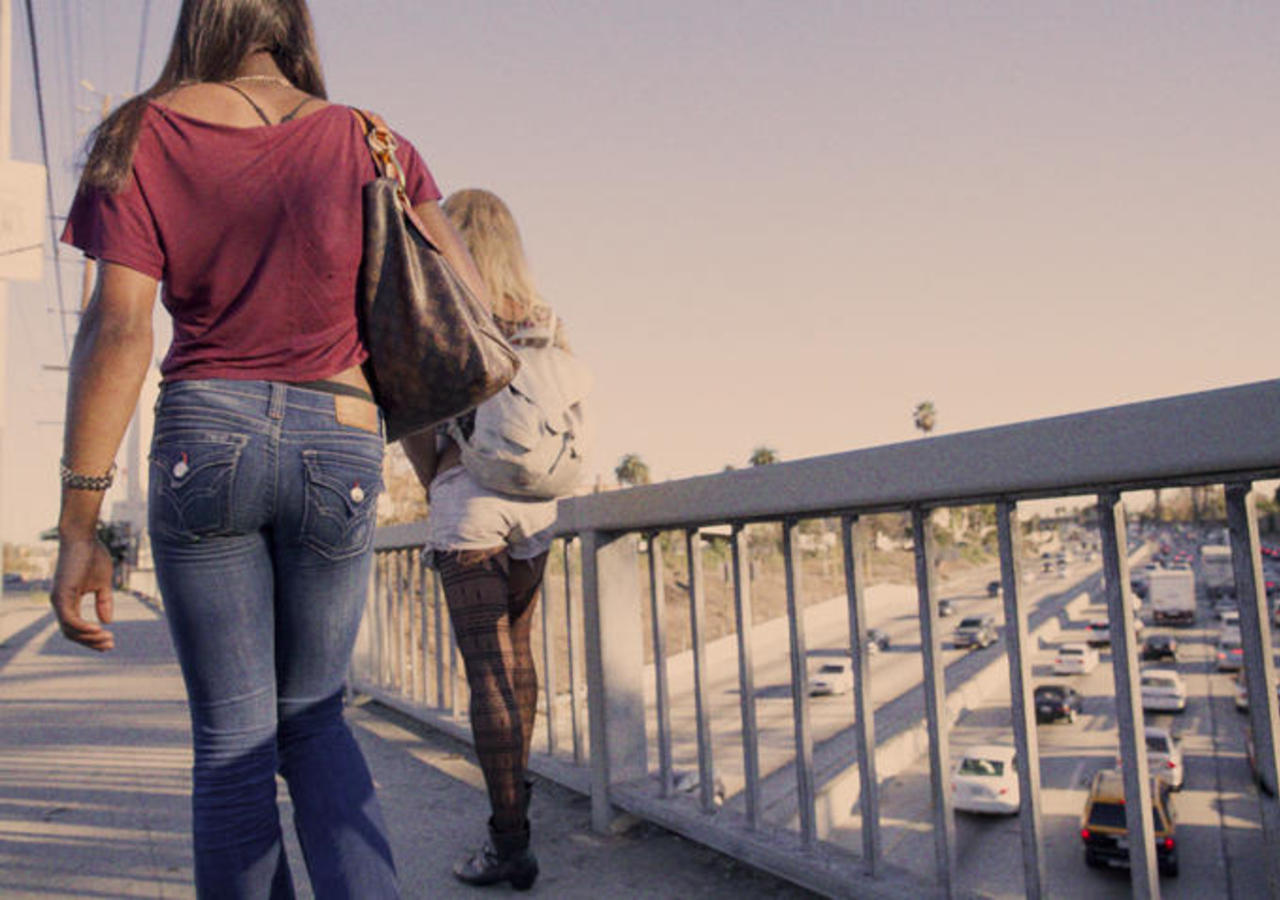 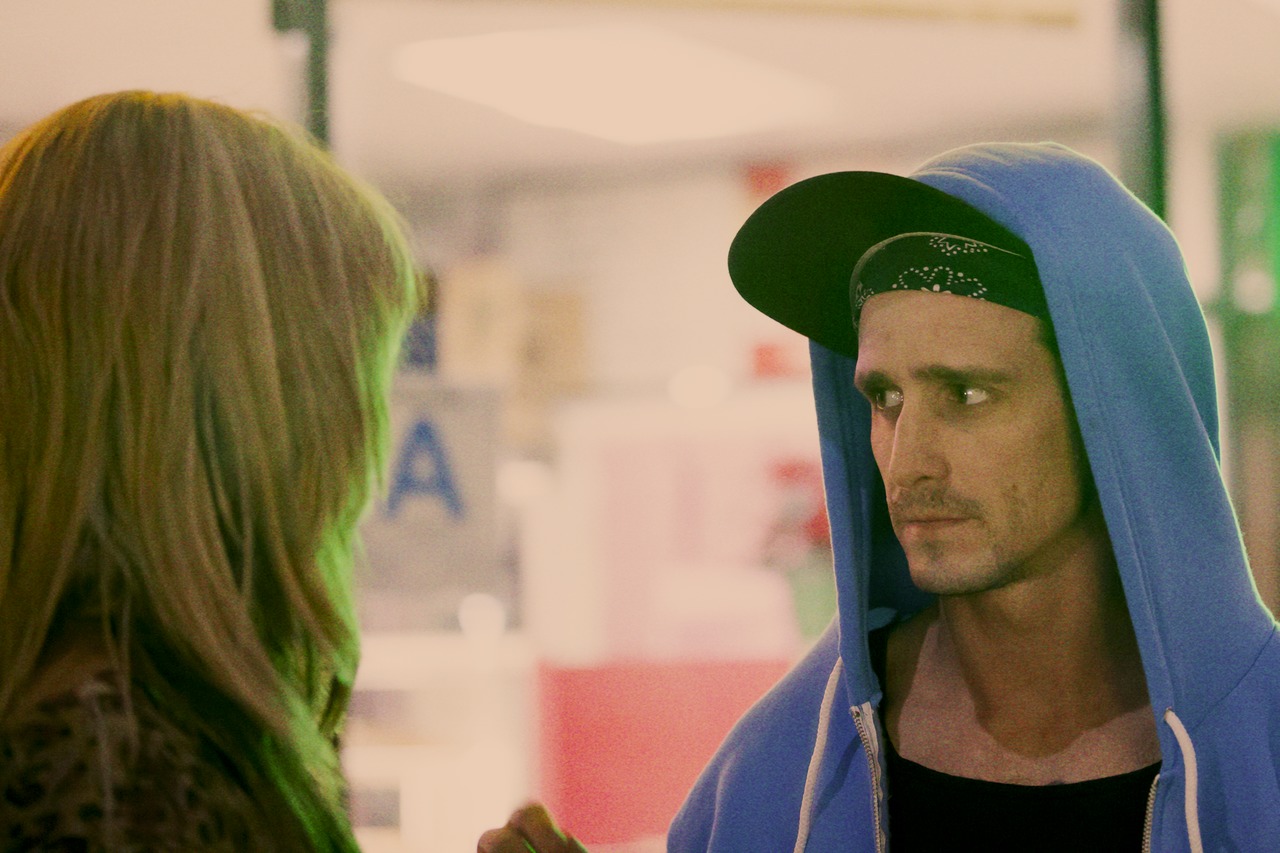 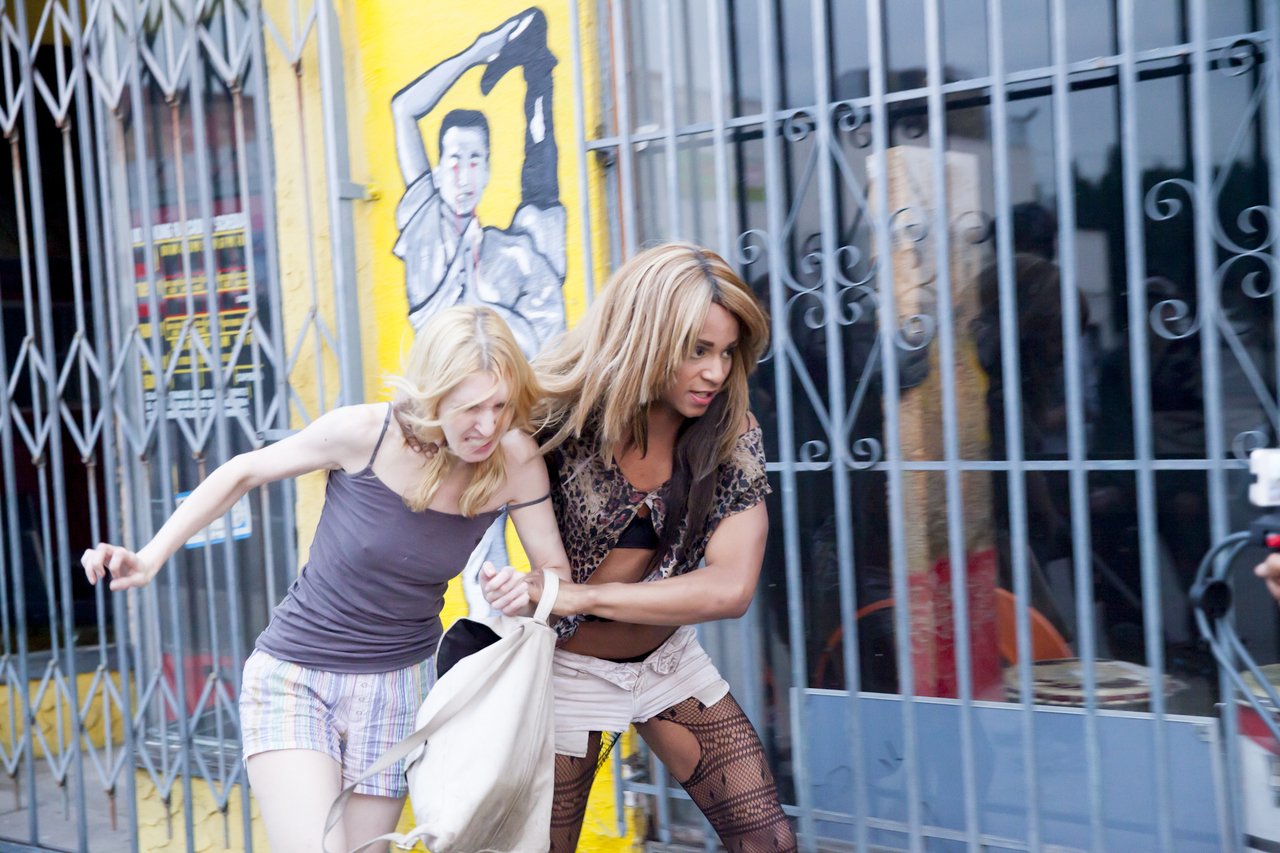 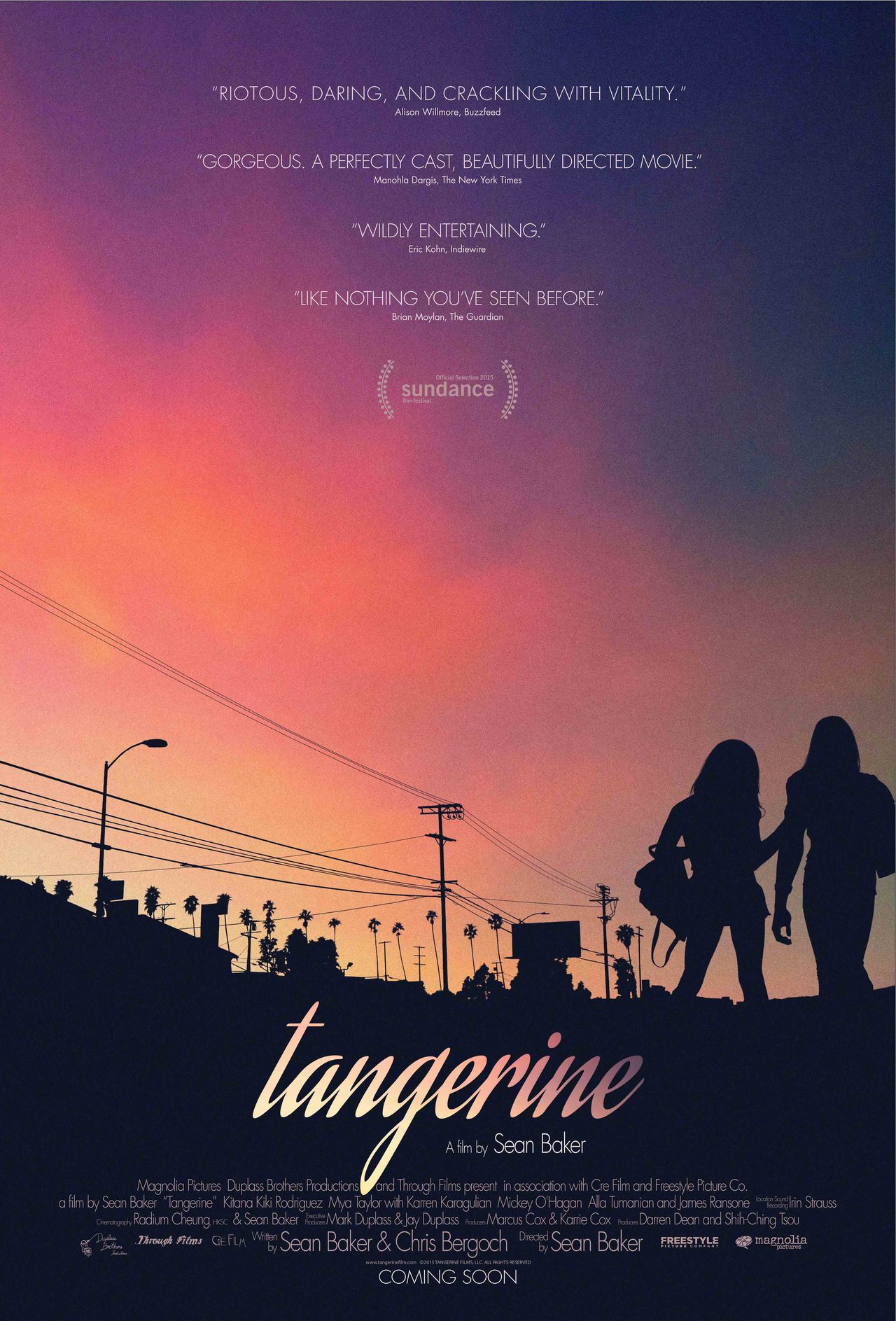