Josh Hamilton Talks Sundance Gem ‘Take Me To The River’ 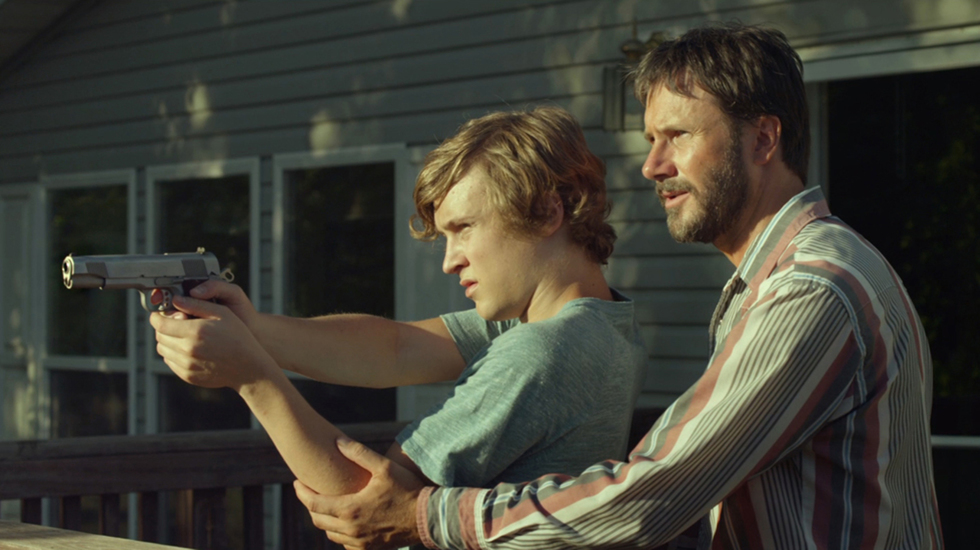 Matt Sobel’s remarkably assured debut Take To Me To The River centers on Ryder (relative newcomer Logan Miller), a sensitive teenager from California who attends a family reunion in Nebraska with his mother (Robin Weigert) and father (Richard Schiff).  A strange incident takes place that involves Ryder and his young niece, and Ryder is put at odds with his volatile Uncle Keith. As Uncle Keith, TFF alum (Bottled Up, TFF 2013) Josh Hamilton turns in a searing performance, filling the screen with a palpable sense of unease.

We talked to the veteran actor about his experience making Take Me To The River, festival audiences and his latest theater projects.

Tribeca: Though you’ve been to the Tribeca Film Festival recently, Take Me To The River marks your first trip to Sundance in quite some time.

Josh Hamilton: It’s been a long time. I was last at Sundance when there weren’t so many movies being made and it wasn’t so hard to get in [laughs]. In the last 10 years, I feel like every small movie I make is always shooting for Sundance. I know there are thousands and thousands of submissions to any big festival, so I just wish them the best. I was so pleasantly pleased for Matt and everyone when I heard the news about Take Me To The River.

Tribeca: Why are film festivals so important for both filmmakers and actors?

JH: In a lot of ways I think film festivals are even more important than they used to be because there are so many films out there today. It’s nice to watch movies with hungry audiences who are obviously movie lovers. Indie films and filmmakers need the support of their community.

Plus, fewer and fewer people are going to the movie theater. More and more, people are watching movies at home or on their computers or on their phones. Indies that play the Festival circuit are lucky to get any form of distribution at all. When people do find them, it’s mostly likely through a streaming service like Netflix or iTunes. Film festivals are important on a practical level for audiences to see these movies on the big screen. It’s fantastic for the cast and crews as well.

Tribeca: You regularly work in theater, television, studio movies and smaller films. What’s your favorite thing about working on indies?

JH: It’s all about the people you’re working with and the material. To me, it doesn’t matter if it’s a small or big film. My favorite thing about working on a small film like Take Me To The River is that the production always ends up being a big family affair by necessity. We were staying in Matt’s friends’ and family’s houses and they also ended up doing some of the catering. It felt like a real community coming together, which you don’t get on those larger film sets. We basically shot the movie in a two-block town in Nebraska.

Tribeca: That must have been wild.

JH: One of the things I love about this job is being able to travel to different places and being immersed in different ways of life. We shot the film in rural Nebraska. I grew up in New York City and that is where I spend the majority of my time. I don’t often rub shoulders with true Middle Americans who have different political and social views. They were some of the nicest people I’ve ever met.

Tribeca: You’ve worked with established filmmakers like Clint Eastwood and Sam Mendes, but you often work with up and coming directors like Matt Sobel. Is there something that draws you to projects with first timers?

JH: It always comes down to the script. Any project is a roll of the dice, even if you are working with an established director. Just because a filmmaker has made good movies in the past doesn’t automatically equal success on their next picture. A lot of it comes down to chance, which can be exciting. For Take Me To The River, I knew I liked Matt. I knew he was smart. I watched one of his shorts, and I really dug his aesthetic sense.

Tribeca: What drew you to the character of Keith?

JH: I’m a fairly easy going guy and often, I’m asked to play “nice guy” roles which just aren’t all that exciting, to be frank. When I read the script, I thought that Keith would be a really interesting character to play. I don’t usually get offered roles like this.

Tribeca: Are you an actor who enjoys rehearsing? Were you able to rehearse with the cast on this project?

JH: Rehearsal is a relative term. I’m definitely spoiled by doing a lot of theater. No matter how much rehearsal you’re able to squeeze in on a film set, it’s usually rushed or it’s just a bunch of actors going through a scene a few times during table reads. It’s hard to compare that to month long rehearsals before a show during which you really have time to develop the through line of a character. Because I’ve been spoiled by that process, everything I do in film or television feels under-rehearsed.

Tribeca: If you had to describe Matt Sobel in one word, what would it be and why?

JH: I don’t know why, but the word “keen” springs to mind. He’s so assured and prepared, but also loose. Whenever you come to set, you have to be adaptable, and Matt took everything in stride. He’s an amazing combination of someone who knows exactly what he wants but also is completely alive to everything that happens in the moment.

Tribeca: Keith defies labeling—he is the embodiment of moral ambiguity. How do you prepare to play a character that lives in such a grey area?

JH: Like anyone who is part of a family that has a legacy of shame and abuse, I think Keith is a truly damaged guy. It’s very easy to see him as a bad guy or maybe even evil, but he’s a product of his family’s situation. There’s a rich vein of damage that runs through the family that’s previously been unexplored. It’s clearly passed on in various ways.

Tribeca: One of my favorite scenes in the film is when Keith shows his nephew Ryder how to use a handgun. It’s such a loaded scene—no pun intended! Was that sequence particularly challenging to film?

JH: It was challenging for me on a technical level because I am not a gun guy [laughs]. I grew up in the city. I had to remember what I was talking about and what buttons to push, and that was just a huge hurdle for me. I think there is a part of Keith that does feel that he’s giving Ryder good advice. Keith does see himself as a father figure in that scene, even though he’s fucking with Ryder on another level.

Film festivals are important on a practical level for audiences to see these movies on the big screen.

Tribeca: What were your first impressions of your co-star Logan Miller?

JH: There’s a simplicity to his performance that I really love. Logan isn’t 17 like Ryder. He’s in his early 20s. However, he’s completely believable as a guy on the cusp of manhood. Logan never tried to play younger than he is, which I thought was really smart. He completely captured Ryder’s journey to stake out his own identity. I think you’ll be seeing a lot more from him in the coming years.

Tribeca: I was really struck by your performance in Bottled Up, which celebrated its world premiere at TFF 2013. Can you talk about the experience of working on that film?

JH: An actor dropped out of the film at the last minute and a producer friend of mine called me and asked me if I would be interested in the project and if I was available in two days [laughs]. I really liked the script and the fact that my character was interested in fracking and water purity in New York. That’s a big issue for me. I’m always happy to play a character whose interests mirror mine. I also got to spend some time upstate, which was great and to work with Marin Ireland, who I’ve done a bunch of theater with.

Tribeca: Your two most recent theater projects were Tom Shoppard’s The Real Thing and Neil LaBute’s Reasons To Be Happy. While the playwrights are very different, did you find one of the plays more difficult to tackle?

JH: Every play is difficult for its own reason. Every playwright has his or her own style. I personally find Shoppard very challenging. First of all, it was the first time I’ve ever done an English accent.

JH: It’s crazy, right? Accents don’t come easily to me. I wish I had a better ear. I’ve always been scared of attempting one. It was definitely a hurdle for me, but one I was interested in tackling. Plus, Shoppard himself is challenging. His writing is so un-American in terms of his language. If you just play his wit and wordplay, it’s not interesting. If you just play it earnest and “real,” it doesn’t quite work either. I felt like our challenge on that project was finding a combination of those.

Any project is a roll of the dice, even if you are working with an established director.

Tribeca: Throughout your career, you’ve switched between film, TV and theater roles. Do you find yourself changing your creative process depending on the medium?

JH: I’m always just trying to figure it out [laughs]. Every time I think I’ve got the hang of it, something comes along that’s really well-written or different stylistically from what I’ve done. Just because you had success on your last job using a certain tool doesn’t mean that will translate to your next project. Every job feels like starting from scratch for me.

Take To Me The River premiered Monday night in Park City in the Sundance NEXT section.