John Goodman’s collaboration with famed directors Joel and Ethan has spanned decades, which was apparent during the NYFF press conference for 'Inside Llewyn Davis.' 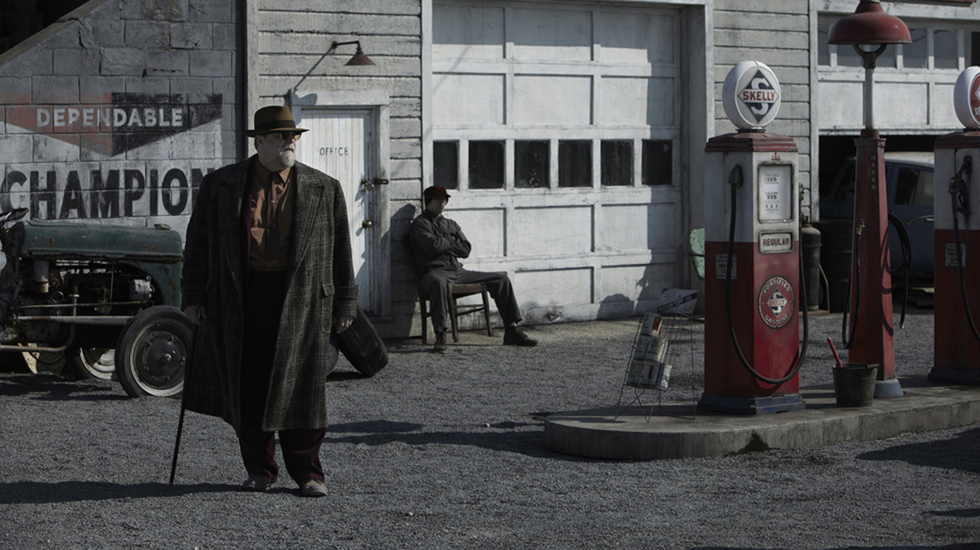 You don’t often think of the Coen Brothers films without thinking of the legendary John Goodman. The Coen’s 6th collaboration with John Goodman (also the trio’s first in a decade), Inside Llewyn Davis, will have its North American premiere at the New York Film Festival next week. The film tells the story of a struggling folk musician in the early 1960s just before Bob Dylan transforms the musical scene.

As with O Brother, Where Art Thou?, the Coen brothers again incorporate Homeric themes in their depiction of the  journey taken by their protagonist Llewyn Davis a character  based on singer-songwriter Dave Van Ronk. Oscar Issac gives a star-making performance as Davis, a musician on a quest to find success on his own terms.  Inevitably, the actions of those around him–especially the women in his life–impact his own personal odyssey (there is even a cat named Ulysses!). Along the way, he encounters the enigmatic Roland Turner, played by Goodman, a jazz musician who takes Davis along with him from New York to Chicago to help pay for gas.

The Coen Brothers were at ease at yesterday’s press conference with John Goodman and Oscar Issac at Lincoln Center, and the quartet took many questions from the audience. Goodman was effervescent as usual, lending his own distinctive charm to the proceedings. Here are a few of his best quotes and what we learned from yesterday’s conference.

"I did internally. My interior monologue was scored."

Unfortunately, John Goodman doesn’t get to show off his pipes in Inside Llewyn Davis, and he had a cheeky retort when someone asked him why he didn’t sing in the film: “I did internally. My interior monologue was scored.”

During the conference, Ethan Coen revealed that famed music producer T-Bone Burnett was the first person to whom they sent the script of Inside Llewyn Davis once it was finished. The Coens previously worked with Burnett on the soundtrack of O Brother, Where Art Thou?, which won multiple Grammys, including Album of the Year.

Much like O Brother, Where Art Thou?, there is a interesting mix of traditional and original music performed throughout the film. Llewyn Davis is a man who struggles with his own authenticity and will sing only standards like  “Hang Me, Oh Hang Me” and “The Death of Queen Jane.” No doubt T-Bone Burnett will have another hit album when the soundtrack is released later this year.

"I thought that was understood. I must work harder."

When a woman in the audience asked whether John Goodman’s character of Roland Turner was supposed to represent a Siren, Goodman’s retort was classic: “I thought that was understood.  I must work harder.”  During the conference, Ethan Coen said, “we thought of the film as a odyssey that doesn’t go anywhere.” Cleverly, Goodman revealed nothing, though his character is the most foreboding presence Llewyn encounters on his trip.

A loud, windbag jazz musician with a bad wig, Turner is crass and completely oblivious of other people, though when he feels that Llewyn is being disrespectful of him (and he is), he tells him of his practice in the black arts, especially his knowledge of Santeria. Much like Odysseus, fate and chance seem to work against Llewyn during many parts of his journey.

"I mainly read their scripts for the pictures."

When asked about a particularly striking visual sequence in the film, Oscar Issac revealed that the Coen Brothers print out the days’ storyboard and short list on the back of the sides for the cast and crew. Goodman, a veteran Coen Brothers player, quipped that these illustrations keep him coming back for more: “I mainly read their scripts for the pictures.”

One of the gems of a press conference between friends is the intimate stories that are uncovered during the course of the conversation. When asked about their collaborative process over the years, Goodman was hesitant to go into an in-depth explanation, but provided an example of the shorthand that has developed over the years: “The shorthand part is hard to explain, so I won’t try. Sorry.  It’s something we’ve always fallen into, I think, since Raising Arizona. One time, they asked me to do a take when I was driving an automobile and I said, 'Oh, you mean a Spanky take!' They knew what I was talking about—Spanky from the Little Rascals—and it’s those kinds of little things that make the days go ever so much faster."

The Coen Brothers also were eager to share their own tales, and Joel recalled a particular instance on Barton Fink where he asked Goodman to open a door with “a little more ropey snot on this take.” Goodman, not needing any further explanation, simply replied, “I’m your boy!” Hopefully, we don’t have to wait another decade for their next collaboration.