“Technology has become a buffer.” We talk to the stars of ‘The Heart Machine’ about modern relationships in the Internet age. 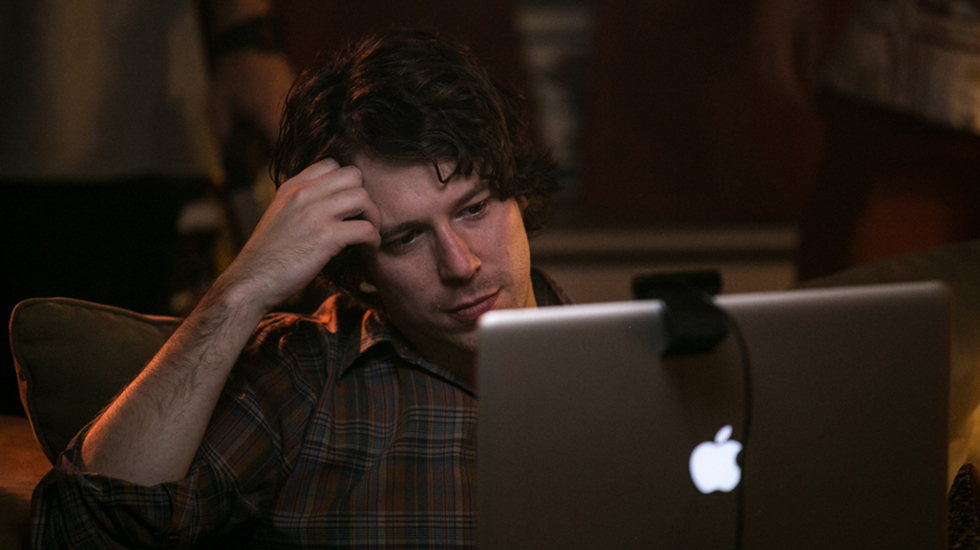 Written and directed by our contributor Zachary Wigon (check out his stuff, he’s great!), The Heart Machine stars John Gallagher, Jr. (‘The Newsroom’) and Kate Lyn Sheil (‘House Of Cards,’ Listen Up Philip) as Cody and Virginia, a couple that meets online and begins a romantic relationship, even though he’s in Brooklyn and she’s in Berlin. As the two talk and reveal more details about their lives, Cody discovers more and more holes in Virginia’s story. Over the course of one hot NYC summer, Cody decides to find out the truth once and for all.

We talked with John Gallagher, Jr., and Kate Lyn Sheil about social media, a strange Eyes Wide Shut connection and why The Heart Machine is essentially a tragedy.

Tribeca: Do you remember your thoughts after reading The Heart Machine for the first time?

John Gallagher, Jr: I threw the script across the room [laughs].

Kate Lyn Sheil: I thought it was very romantic and sad. Those are two qualities I respond to perhaps more than I should.

JG: All kidding aside, I thought the script was poetic and verbose in a cool way. Zach wrote really helpful screen directions for when the characters were just off doing their own thing. I found the writing to be very compelling, almost weirdly like a great romantic novel. There was a lot I could latch on to in terms of the story and characters.

People use the internet and these technological advances to compartmentalize their lives in a way. You have access to such an array of people online that you can reinvent yourself many times over.

Tribeca: What do you think The Heart Machine says about the way our generation deals with love and relationships?

JG: So much communication is now done through Skype, making technology almost a buffer. In modern relationships, it’s not important whether or not you meet your potential partner in person before you start dating. Even non-romantic relationships start online. Whether it’s through Facebook, Twitter or whatever site you’re on, there’s a technological filter that things get put through. How we as a society use those technological tools is interesting, especially in this movie. Our two characters decide to frame their lives in a light that’s most flattering.

KS: Yes, they definitely want to be seen in the most attractive way possible. People use the internet and these technological advances to compartmentalize their lives in a way. You have access to such an array of people online that you can reinvent yourself many times over.

Tribeca: As actors, did you feel you had to take a stance on whether the virtual relationship between Cody and Virginia was real?

KS: Oh I thought it was very real, the whole time.

KS: The film is essentially a tragedy.

KS: Well, one of the things I like most about Zach is that he is an avid movie watcher. Plus, he spent so much time with the script and was so sure of himself when he got to set. He knew exactly what he wanted, which was great. I think Zach will probably carry this level of enthusiasm through to his next project and beyond. He made the set a very cool place to be around.

Tribeca: If you had to describe Zach as a director, what would it be and why?

KS: I think I would use the word “assured” to describe him.

JG: “Very optimistic” would be my description. I don’t know if he was secretly stressed out about making a low budget movie in 18 days in the streets of New York City, but we never saw any doubt from him [laughs]. Plus, 65% of some filming days were based on how good the internet connection was for the Skype scenes. He was always a really good team leader and always really positive.

KS: You know what? I’m going to change my answer to “champion.”

JG: That’s good. “Optimistic” sounds so condescending in hindsight [laughs]. Seriously, Zach’s great and I really loved working on this.

Tribeca: Did you have the luxury of a rehearsal period?

KS: A very brief rehearsal period, but a very fruitful one.

Tribeca: Can you describe the process?

KS: We read through the script several times, in addition to a little bit of improvisation. We mostly worked on the Skype scenes because that’s mostly how John and I interact in the film.

Tribeca: Did any of your improvisation make it into the film?

KS: A bit.  I think Zach adjusted the script slightly after rehearsal and we also improvised on set a bit.

Tribeca: Is it intimidating to act against a computer screen?

KS: I thought a lot about it beforehand, but I still felt a little shocked by it the first time. We were doing the scenes to the computer as opposed to an actual scene partner in the flesh. It’s so different from looking the person in the eye [laughs].

Tribeca: You were actually Skyping on set in your character’s online scenes together. Can you talk about that and those pesky Internet connectivity problems?

JG: [laughs] That was frustrating. The internet would go down every now and then in the middle of takes and in between takes. However, we as actors were dealing with the same frustrations that our characters were dealing with, so that was neat. Those issues were constantly reminding us of what it was like to be in a long distance relationship. You just start accepting a blurry, out of sync version of your partner.

Tribeca: What do you think Cody’s real goal is with Virginia? Does he want to meet her in person or just prove that she lied so he can move on?

JG: I think he has no idea—that’s why he’s just stumbling through the dark for most of the movie. Cody doesn’t have the tools to handle the truth. He’s pretty intrepid, however. He goes off on this almost private detective adventure, but he’s just putting one foot in front of the other the whole time.

Tribeca: How did Zach work with each of you to create your character?

KS: The script was a major reference point, obviously. We really talked a lot about Virginia and what she wanted. Zach also sent me a number of poems, in addition to the ones at the end of the film. I wish I could remember the names of the poets, but I can’t. We also talked about Virginia’s interests, especially reinvention, and how that fit with her being a big fan of David Bowie.

JG: There’s so much to go on from the script. Mostly Zach and I discussed Cody’s intentions and worked on understanding the character’s actions, both when he’s good and when he goes off the rails. Zach also gave me a couple of movies as reference material. One of them was Eyes Wide Shut, which I hadn’t seen before. It’s not entirely the same story, obviously [laughs].

JG: Yes, I tried to channel Tom Cruise the entire time [laughs]. It was more about looking at characters that start off on personal odysseys that are born out of their own insecurity and jealousy. Both William Harford and Cody get in over their heads and have no clue where to turn.

The film is essentially a tragedy.

Tribeca: What’s your favorite thing about working in independent film?

JG: The freedom. As an actor, you can take some risks and go out on a limb. You aren’t as focused on results as much as you are on the process. You can tell the story you want to tell and use the tools you have to accomplish that.

KS: I really enjoy the collaborative nature. When you’re making an independent film, it almost feels like a family.

Tribeca: The Heart Machine received a lot of support on Twitter and Kickstarter. You both have Twitter accounts. As actors, how important is it to maintain a social media presence.

KL:  [laughs] You might as well shoot yourself in the foot.

KS: [laughs] I actually joined Twitter very recently. I was on 'House of Cards' last season and there was a Twitter Q&A that I got to participate in. There was an assumption that I was already on it [laughs]. I very quickly joined and tweeted some things and immediately felt a sense of regret and shame.

KS: I know! Somehow I got verified right away.

KS: My manager has ways.

KS: I don’t mean to brag, but I got verified right away. Now I’m just tweetin’ up a storm [laughs]!

Tribeca: Throughout both of your careers you have switched between film, theater, and television. Do you change your process for each medium?

JG: I think I find myself changing it every time. I never went to acting school or anything, and I’m not sure if that’s a good thing or not. There’s nothing formula-driven to that way that I approach a role. I feel like I have a weird blind approach. I trust in the collaborative nature of the project and in my fellow actors.

KS: So much depends on the actors  you’re working with and the director. I find myself feeling things out with the rest of the cast. In terms of switching from an independent film to a TV show, I was very nervous about it. On a film set, there’s a certain uniformity to how things operate. I felt familiar and comfortable on a television set.  I thought there would be some other kind of magical element, but there was not. However, I enjoy any opportunity to try new things.