We spoke to Jerusha Hess about working with novelist Shannon Hale (and Stephenie Meyer), fandom, and why a sensible woman would choose Mr. Bingley over Mr. Darcy. 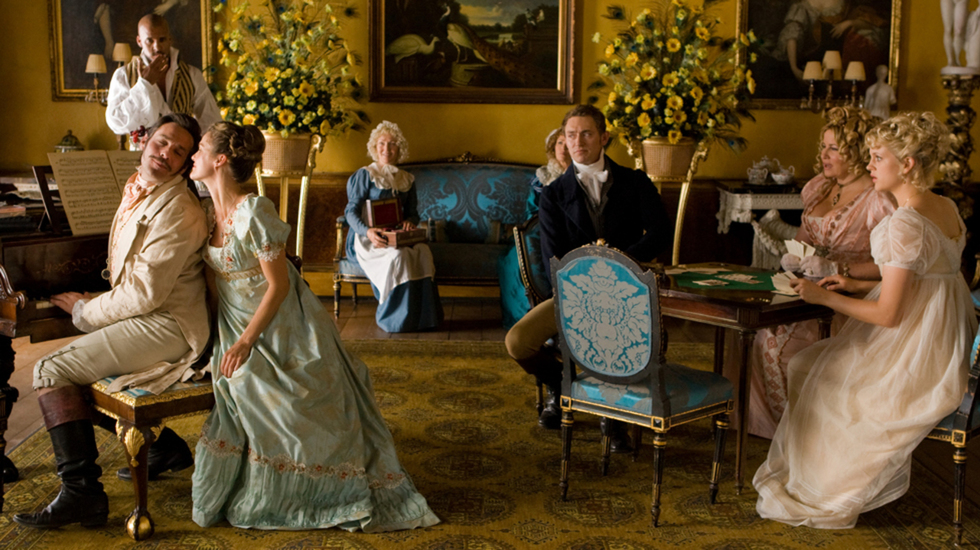 Keri Russell, Bret McKenzie, JJ Field, Jennifer Coolidge, and Jane Seymour star in Austenland, a film that marks the directorial debut of screenwriter Jerusha Hess (Napoleon Dynamite, Nacho Libre, Gentlemen Broncos). This romantic comedy follows Jane Hayes, a single woman in her 30s, whose personal life is stunted by her obsession with all things Jane Austen. Despite her friends’ warnings, she sets out on a trip across the pond to immerse herself at Austenland, a theme park for Austen lovers that provides the experience of living within one of the author’s novels.

We spoke to Jerusha Hess about working with novelist Shannon Hale, fandom and why a sensible woman would choose Mr. Bingley over Mr. Darcy.

Tribeca: Every Austen fan can appreciate Austenland. Do you remember your initial encounter with Jane Austen? Which of her works was the first that you read?

JH:  I think I was a junior in high school and we had to read part of Pride and Prejudice—I don’t even think they made us read the whole thing, but I did.  I just loved it. Shortly thereafter, I think I saw the Laurence Olivier version of Pride of Prejudice, then the  Colin Firth one. After I went to university, I read a few of her other works. I was an English major, and I loved them. Her novels are so timeless—still so wise and witty.

Tribeca: This is the first time you’ve collaborated on a script with someone other than your filmmaker husband, Jared Hess, although Mike White did work with you a bit on Nacho Libre. What first drew you to Shannon’s novel?

JH:  She actually gave me it to me on fluke.  I met with her to discuss a different book of hers, and she handed Austenland to me and said, “look at this one, it’s all ready.” And she was right—it was so cinematically ready.  The concept was just brilliant and it just felt so fresh. I thought it was the perfect vehicle to add  humor and make a great first film.

Tribeca:  Can you talk about your collaborative process with Hale? What was it like working with the novelist on adapting the screenplay?

JH:  She was awesome. It was a lot less emotional than working with my husband because we could leave each other when we disagreed. [laughs] She was really fun and kind. She let of let me have a first draft by myself, and then she came in and we started editing together and she was very helpful. She, of course, knows the thing back and forth and helped me to understand the story and where the characters are coming from. I just added layers of humor to it.

Tribeca: And Stephenie Meyer came aboard to form a sort of super team of female Utah artists.

Tribeca: What was it like to work with such a powerful team of women?

JH:  It was very girly. We met up at Stephenie’s vacation home and just sat around and giggled over what British actor would be best in our film. [laughs] We just really chick-ed out with it and we had a lot of fun.  It was good because the main character, Jane Hayes, is based on Shannon Hale. It was like Jane was sitting right there. Shannon is just obsessed with the era and with all things Colin Firth.

Tribeca:  Your previous films are all centered on male protagonists and are quite quirky. What drove you to make a commercial film that’s almost exclusively for a female audience?

JH: Yeah, I just wanted to do something on my own. I wanted to have my own stamp on it and to make it a movie for myself. I’ve written three boys already and it was finally time to write a girl.

There’s a point where anything goes from hobby to obsession. You have to be careful of the line or else you’ll have a Napoleon Dynamite tattoo on your chest forever.

Tribeca: Austenland includes some interesting commentary on fandom in general. Jane’s obsession with Austen is considered to be “unhealthy” by her friends, but she buys her ticket to Austenland nevertheless. Do you think fandom can be empowering? Detrimental?

JH:  Well, I think there’s a point where anything goes from hobby to obsession. You have to be careful of the line or else you’ll have a Napoleon Dynamite tattoo on your chest forever, which I’ve seen on people.  So I think the character herself, she toes the line the whole time, but she eventually gets over it. We’re definitely saying don’t lose your life to this other world because it’s not real.  However, it’s super fun and super amusing to watch.

Tribeca: This is Keri Russell’s second leading role in an indie movie (the first being Waitress). What made you want to cast her as your “Jane?”

JH: She was just brilliant in Waitress, and I have loved her even from as far back as Honey, I Blew Up The Kid. In Waitress, she was so innocent and sweet, and then, just look at her being so raunchy and tough in The Americans. She is amazing. Jane Hayes is definitely that innocent, sweet, pathetic character at times, but she is empowered by the end.

Tribeca:  Bret McKenzie and JJ Feild are your two leading men. Did they feel any pressure to live up to favorite interpretations of Austen’s men by actors such as Colin Firth (Darcy) and Ciaran Hinds (Captain Wentworth)?

JH:  I think that’s the joy of this movie: no one felt any pressure whatsoever. Bret himself isn’t even an actor, and I cast him in this role that should have been played by Matthew McConaughey. I teased him the whole time, saying ‘I cast you for your big body, Bret.’ He’s just so loveable in his “every boy” way. As for JJ, I cast him in England. I had already seen him in a few things and was swooning the first moment I met him. I told him, ‘You’re perfect for this.’  He loved the role other than the fact that he had to play the straight guy.

"I said to [the costume designer], 'Let’s see what Austen barf looks like.' And that’s what we created."

Tribeca: I was really struck by the design of Austenland. Can you talk a little about working with your production team?

JH:  I holed up with my production department in a room for several weeks, and we tried to slip as many jokes in as possible that I didn’t have to get pre-approved. I could hide in the background and all the layers of costumes and props. My costume designer was this guy named James Maryfield and he’s brilliant. He’s done many, many historical period pieces in England, so he knew the genre from head to toe, and he was so excited to just barf on it. I said to him, “Let’s see what Austen barf looks like.” And that’s what we created.

Tribeca: Since this is your directorial debut, is there any lesson you learned on set? Is there something you will do differently the next time around?

JH:  I think the next project will have to have just one actress in it. It was hard as a first timer to navigate an ensemble. I had to deal with not only the personalities of the actors, but with many different angles. The balance was tough to achieve. Even my husband was like, ‘Wow, you really bit off a lot because I never have more than like two people in a scene.’ It’s not something I would change, you know; directing Austenland was baptism by fire, but it was tough.

Tribeca:  One last question: Who is your favorite Austen heroine and why?

JH:  I’m just kind of pathetic and I love Elizabeth Bennett, but if my daughter said, “Oh I’m in love with Mr. Darcy,” I’d say, “ Go for Bingley. Go for the happy guy.”

Austenland is now in playing in NY & LA. Check here for showtimes and expansion dates.