WATCH: Jennifer Lawrence Gets Her Erin Brockovich on in First Full-Length JOY Trailer 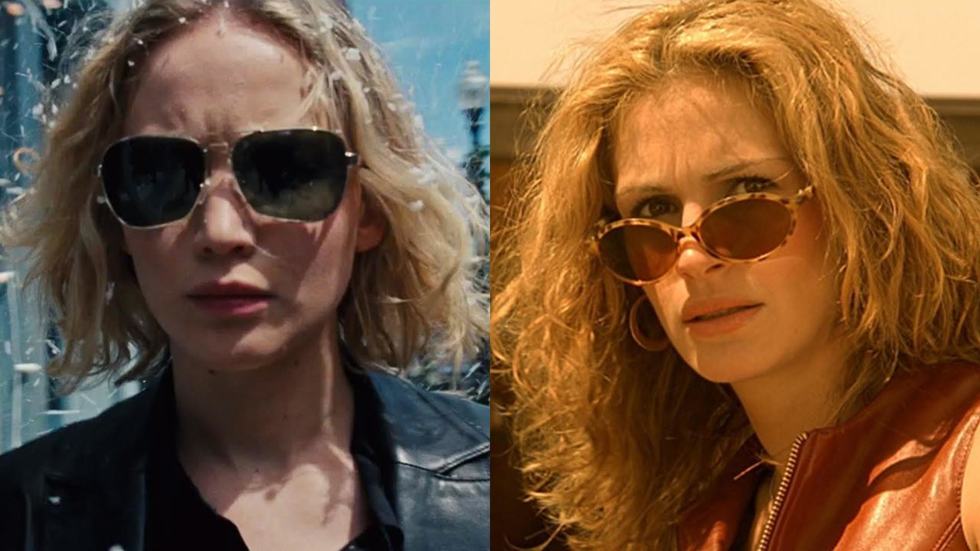 One, Oscar season is literally right around the corner and we should all rejoice at the genuinely overwhelming amount of female-led projects that we have been blessed with this year, as well as the ones we have to look forward to in the coming months, all headlined by one or more acting goddess: not just Joy, but also 45 Years, Brooklyn, Carol, Freeheld, Grandma, I'll See You in My Dreams, Our Brand is Crisis, Ricki and the Flash, Room, Sicario, Suffragette, Truth, among others.

And secondly, Jennifer Lawrence is Erin Brockovich-ing. To be clear:

Erin Brockovich (v.) - to star as a resilient, real-life American woman in an adult-driven drama directed by an in-demand auteur while at the height of your power and prestige

I mean it with all sincerity when I say that Steven Soderbergh's Erin Brockovich is the Citizen Kane of scrappy, rousing dramas centered around hardscrabble women reinventing themselves amid personal or professional calamity. (See also: Alice Doesn't Live Here Anymore, An Unmarried Woman, Working Girl, Middle of Nowhere, Wild, etc.)

It also features one galvanizing star performance by peak-fame Julia Roberts, who deploys her usually distracting celebrity persona in the service of a spiky, sensational, and attention-demanding heroine. She's electrifying, as is the film, and I have all my fingers crossed that Joy and Lawrence — who's both the Most Famous Actress in the World and one of our most fascinatingly, unfussily talented — will follow suit.

Although the twenty-four-year-old Lawrence seems, once again, wildly too young for a role that might be better suited to an older, more world-wise actress, I refuse to pretend that I won't follow Lawrence — who gets married, handcuffed, and trigger-happy in the two-and-a-half-minute span of this trailer alone — wherever she goes.

At this point, there is almost nothing that Jennifer Lawrence does not deserve from Hollywood, whether it's a $20 million paycheck or the chance to re-team with her frequent, actor-focused collaborator Russell (who has quickly become the Wyler to her Davis, the Hughes to her Ringwald, the Tarantino to her Thurman) and her Silver Linings Playbook co-stars Robert De Niro (as her father) and Bradley Cooper (as an HSN executive) in a midrange drama with a plum, juicy leading lady role that's practically a February ticket to the Dolby, in and of itself.

Joy opens this Christmas. Take a look for yourself.