In the second edition of our new Vine interview series, we talk to full-time Viner and #6SECFILMS shortlister Khoa Phan on the methods and inspirations behind his work - and his tips for succeeding with Vine. 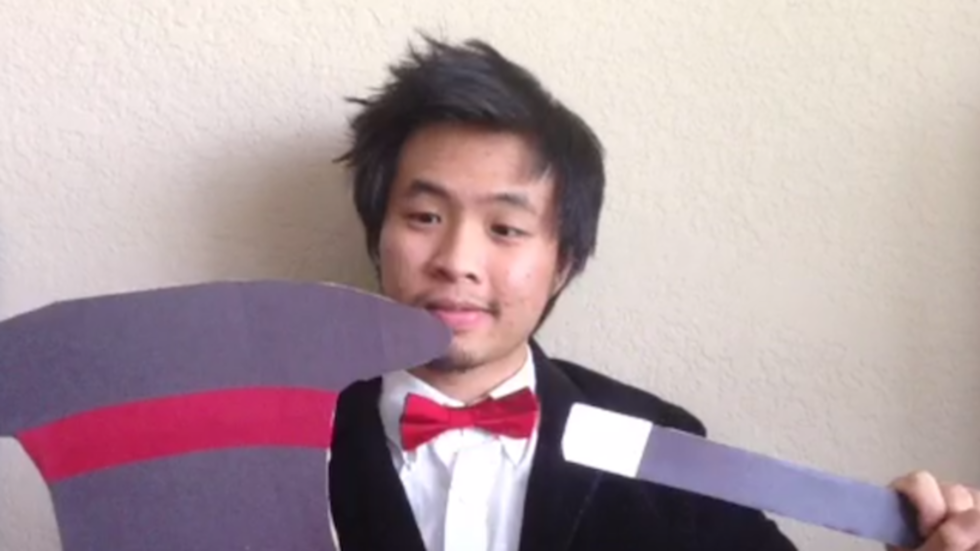 This week's interview with a Pro Viner features Khoa Phan, a stop motion designer and Viner who hails from San Diego and, like last week's interviewee Meagan Cignoli, made it to the shortlist of our TFF 2013 #6SECFILMS Vine Competition. His work on Vine has sparked interest and collaborations from the likes of Peanuts Worldwide, Chevrolet, CNN, Samsung and MTV -- something he never dreamed would happen. Khoa is getting opportunities he never thought possible because of his work on Vine, and his message to all the creative thinkers out there is to "unlock your imagination and let it take flight!"

Tribeca: Your Vines use paper in really beautiful and innovative ways. It seems to be your preferred medium – why is that?

Khoa Phan: Well, it all started with the whole "use what you have". I had construction paper around and that's what I've just stuck with. Paper is very easy to use and manipulate, and I can also always use some pieces for future Vines.

Tribeca: How long on average does it take you to complete a Vine? And how do you come up with and execute those flawless transitions?

KP: I like to take about 45 minutes to an hour and a half on my Vines. I want things to be very fluid, so with animation you need to make it flow nicely. I spend some time thinking how I can make the transition look smooth. Small subtle movements are key. Sometimes things happen like glitches where Vines don't show up, which may lead to a 3 hour Vine…

Tribeca: You’ve also done Vines for various causes such as (RED) and Livestrong. What other charities do you think could benefit from a Vine competition?

KP: There are just so many that could benefit from Vine… I wouldn't know who to name! I think, from the top of my head, UNICEF could use Vine to help spread awareness of their cause.

"I spend time thinking about how I can make the transition look smooth. Small subtle movements are key."

Tribeca: How much planning do you do before making a Vine? Or do you spend some time experimenting with camera angles/lighting/etc until you form an idea? (Essentially, what’s your process usually like?)

KP: Thinking of an idea is usually the harder part for me. After that, I try to roughly frame how I want the Vine to look, which I draw out in my sketchbook. Once that's done, I set the angle of the camera and build from that. Compared to most Viners, I don't have the most traditional "tripod", so I can't easily change my setup. Whatever cut-outs I make are specifically meant for that camera angle.

KP: Before Vines, I just made GIFS but not videos. That's probably how I started doing stop motion on Vine.

KP: There are so many because the Vine community is like my family now!

For the artistic side of Vine, I love Meagan Cignoli, Jethro Ames, Matt Willis, Pinot, Ian Padgham, Adam Goldberg… and that's all I can think of right now.

KP: I personally think there should be more sections than just Popular Now and Editor's Picks. I'd like there to be more creative and artistic content on Vine. Don't get me wrong, I love all the comedians there; they're truly hilarious. But it just doesn't seem like Vine is that keen on the artsier users. Also, it seems like the Popular Now section is set to a certain algorithm of likes/followers ratio, so it's harder for new fresh content to be noticed. There is so much unseen talent waiting to shine a bit!

"You can do all kinds of things with the tap-to-record function, so just tinker with it."

Tribeca: What is one piece of advice you’d give to beginning Viners?

KP: Just have fun with it! There's so much you can do with 6 seconds -- it's all about exploring the possibilities. You can do all kinds of things with the tap-to-record function, so just tinker with it. And no one likes a spammer. Lastly, don't be those people that follow and then unfollow for followers…

Tribeca: Now that Video on Instagram is an option, do you plan to experiment with the new app?

KP: Well, I think Instagram video for my purposes is much harder. The tap-to-record system on Vine is so great. But I will be using it for stop motion from time to time. I am also partnering up with Peanuts Worldwide to run the #snoopygram on Instagram too!

Julia Pugachevsky is Tribeca's Vine Correspondent (among other things). Check out her round up of the Week's Best Vines every Friday morning on TribecaFilm.com, and come back next Wednesday for another interview with an expert Vine user (and see last week's, with Meagan Cignoli).