Home » Tribeca News » Greta Gerwig: A Modern Indie MISTRESS of Her Own Making
View All News

Greta Gerwig: A Modern Indie MISTRESS of Her Own Making

In a post-Woody and Diane world, Greta Gerwig has taken on the latter's mantle and become a rare cinematic entity: an invaluable auteur muse and a colorful comic queen, all her own. 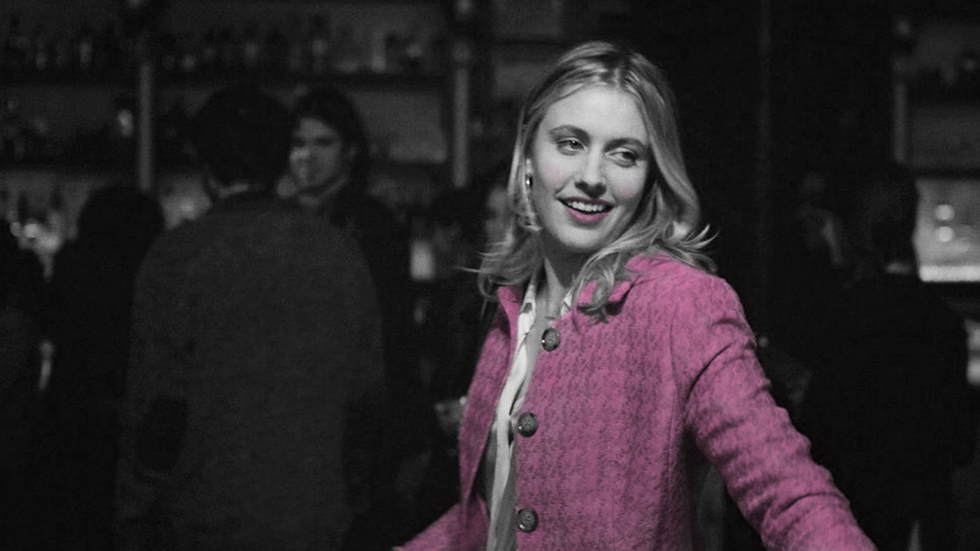 Greta Gerwig’s single greatest asset might just be her normalcy.

She easily resembles at least ten girls you went to high school with, or someone you might naturally sit beside in a lecture hall, on a bus, or in a movie theater. It’s easy to envision what Hollywood might have done with Gerwig had she entered the film industry in more conventional fashion, as anything other than a mumblecore darling on Chicago’s off-the-radar indie scene. I imagine lots of wallflower parts, bookworms, mousy coeds, snarky second bananas, and maybe a dippy love interest role or two. Hollywood still staunchly refuses to stretch its creative muscles when it comes to casting actresses who lack glossy, Glamour-ready good looks, which is why Greta Gerwig couldn’t possibly exist in our current film landscape without independent cinema.

For the near-entirety of her roughly decade-long career, Gerwig has served as an active muse to at least one indie auteur or another, starting with Joe Swanberg, who put Gerwig in DIY, nickel-budgeted, improv-based microcinema miniatures like LOL, Hannah Takes the Stairs, and Nights and Weekends. In 2009, Noah Baumbach, an increasingly prominent writer-director with a small but respectable filmography and a 2005 Oscar nomination for The Squid and the Whale’s screenplay under his belt, hand-picked Gerwig for the female lead opposite Ben Stiller in the divisively acidic character snapshot Greenberg. The considerable acclaim of the film and Gerwig's turn led to a Best Female Lead nomination at the Indie Spirits, a creative and real-life partnership with Baumbach, and future acting-writing collaborations in the forms of 2013’s majestically intimate female-friendship comedy Frances Ha and this month’s saucy modern-day screwball Mistress America. Along the way, Gerwig has appeared in films by such indie luminaries and underground upstarts like the Duplasses (Baghead), Mia Hansen-Løve (Eden), Ry Russo-Young (You Wont Miss Me), Whit Stillman (Damsels in Distress), Daryl Wein (Lola Versus), and Ti West (The House of the Devil). There have also been higher-profile ventures with veterans like Barry Levinson (this year’s The Humbling, opposite Al Pacino) and Ivan Reitman (No Strings Attached, a throwaway Natalie Portman-Ashton Kutcher romcom), as well as that blink-and-miss-it Arthur remake with Russell Brand and, on the smaller screen, a gender-reversed How I Met You Mother spin-off that was quickly scrapped during the Fall 2014 season.

With future projects from the esteemed likes of Rebecca Miller, Mike Mills, Todd Solondz, and, undoubtedly, Baumbach on the horizon, it’s tempting to label Gerwig something like “Queen of the Indies,” but out of reverence for Parker Posey and with full admittance that such a moniker has always sounded pretty flimsy to begin with, I’ll refrain. Gerwig’s ascent also feels rarer but also much more specific than the relatively similar rises of popular peers like Brie Larson or Shailene Woodley, both powerfully persuasive and infinitely promising performers who have nonetheless proven more willing than Gerwig to diverge from the indie paths they began on. Gerwig's collaborative spirit with notably male directors like Swanberg and Baumbach and the unconventional leading lady positioning that have come to define her persona are actually, for me, immediately reminiscent of the legendary partnership between Woody Allen, of whom Baumbach is a clear heir, and Diane Keaton, a bonafide high priestess of unconventional leading ladies and the actress whose talents, tastes, and trajectory most closely resemble Gerwig’s.

Over the course of five films — including, in chronological order, Sleeper, Love and Death, Annie Hall, Interiors, and Manhattan — plus the Allen-written but Herbert Ross-directed Play It Again, Sam, Allen and Keaton composed an illustrious albeit temporary creative collaboration that ran for six gloriously fruitful years in the 1970s. (Keaton contributed a small singing cameo to 1987’s Radio Days and returned as lead to 1993’s Manhattan Murder Mystery as a favor to the recently disgraced Allen.) The unmistakable crown jewel of this heyday is Annie Hall, a pinnacle of American romantic comedy (based on Allen and Keaton’s real-life romance and break-up) that offers one of the most indelible and iconic comic performances ever put on screen in the form of Keaton’s breathtakingly natural and flawlessly detailed inhabiting of the title role.

Although they’re hardly the same actress, I see a lot of Keaton in Gerwig, even apart from the muse connection or the fact that they both share similarly religious, suburban California upbringings. (Keaton hails from Los Angeles, Gerwig from Sacramento.) They have an unfussy, no-stress comedic demeanor, a loosey-goosey pliability with their line readings, and a sense of moment-to-moment spontaneity with fellow actors that feels electrically, energetically improvisational, even on the occasions when it almost certainly isn’t. Like Keaton, Gerwig is boldly taking chances at a vital moment in her relatively young career, even if it’s occasionally to less-than-impressive effect: Keaton had The Little Drummer Girl and Gerwig has this year's The Humbling, which creakily miscast her as a duplicitous bisexual viper, although there’s a momentary kick to seeing Gerwig keep Pacino, Keaton’s Godfather co-star and onetime paramour, on his toes. Both actresses also come armed with a surprisingly versatile emotional range that allows them to see-saw between dramatic and humorous registers, often within the same movie. Keaton is best remembered today as a premier comedienne, which she was and (infrequently) remains, but there’s a whole bounty of Keaton performances in potent, searing dramas like Looking for Mr. Goodbar (released the same year as Annie), Manhattan, Reds, and Shoot the Moon that are seldom talked about in reference to Keaton’s elegantly textured acting achievements.

Gerwig’s body of work exhibit a similar adaptability, both within the Baumbach films and beyond. The heartbreaking sincerity of Greenberg’s flustered, insecure twentysomething Florence is a subtly and uniquely dissimilar creation than Gerwig’s cheeky, cheerily straight-faced leader-of-the-pack in Stillman’s Damsels in Distress, or Gerwig’s wondrously worked-up Frances Hallady, who, like Keaton’s Annie, is the namesake of a wistful New York comedy that furnishes an incisive yet tender portrait of an urban woman who is fully and beautifully in and of her time. Gerwig and Keaton are invaluably three-dimensional life sources to their respective films. They capture the ache and exhilaration of being alive and in love in New York City, whether that romance be with a lover, as in Annie, or a friend and lifestyle, as in Frances. But whereas Keaton’s accomplishment is almost strictly limited to what's visible on film, Gerwig’s triumph in Frances can be measured both onscreen and off.

As actress and writer of numerous feature films (including Baumbach’s Frances and Mistress and Swanberg’s Hannah and Nights and Weekends, the latter of which she co-directed with Sa), Gerwig is transcending the muse label by taking a decisive creative hand in actually shaping the projects of which she remains the onscreen center. For Keaton, early Allen collaborations like Sleeper and Love and Death often cast her as the romantic sidekick who could always hold her own opposite Allen, to often bouncy and delightful effect, but who existed in these first pictures for Allen, who requires someone to play off of, and who, in crafting Keaton’s early characters, also had a major hand in shaping her trademark comic style. Even in a film like Annie, where Allen famously cribbed from Keaton’s own life and personality to create his most beloved filmic heroine, one gets the sense that it’s chiefly Allen who is organizing his leading lady’s offbeat image and fine-tuning it to fit his ideas. Conversely, in a film like Frances, Gerwig, who co-wrote that film’s semi-autobiographical script with Baumbach, almost always feels like her character’s chief shaper.

Gerwig is an invigorating coordinator of her own persona, in however many varied forms it may be stretched and styled to accommodate, in Baumbach’s worlds and outside of them. That same persona gets a deliriously outsized re-adjustment in this summer’s Mistress America, a tonally-ambitious co-authorship between Baumbach and Gerwig that unfolds like an extended Girls episode as directed by Howard Hawks. In the film, Gerwig’s Brooke, a haughty hot mess with delusional professional aspirations, becomes both the outrageous life source and unwitting creative inspiration to her soon-to-be stepsister, a guileless Barnard undergrad named Tracy (Lola Kirke), with eccentric misadventures soon to follow. Even if the giddily fun but increasingly unfocused Mistress might be a comparatively minor entry in the Baumbach-Gerwig canon, it still affords Gerwig the (self-provided) opportunity to amp up her comedic sensibilities in the service of a nervily caustic character and performance, which Gerwig recently admitted at an IFC Center screening was inspired by such dangerous screwball soul sisters as Rosanna Arquette’s eighties-encapsulating roles in After Hours and Desperately Seeking Susan, Melanie Griffith’s peak performance in Something Wild, and a turn from Allen’s other legendary muse, Mia Farrow, in Broadway Danny Rose.

Like the work of obvious ancestresses such as Farrow and Keaton, Gerwig’s performances have all been refreshing reminders that normalcy — horrid, impossible concept! — need not be mistaken for blandness. Oftentimes, surface normalcy can be an actress’ advantage: it provides plenty of chances for subversion and leaves more room for surprise, from collaborators, from audiences, and from the performer herself. I have yet to see a Gerwig performance that hasn’t surprised me in some subtle but crucial way. I wonder if anyone anticipated that the actress who conjured such dazzling, painful emotional precision in Greenberg would become one of our gamest and most risk-taking comediennes, as well as a trusted scribe and emerging filmmaker, who is set to make her first solo directorial outing with the just-announced and likely autobiographical coming-of-ager Lady Bird, which tells the story of a young woman's last summer in Sacramento. Keaton, too, made her share of character-driven but unevenly-received directorial outings in film and TV, including 1995's Unstrung Heroes and 2000's Hanging Up, even though these films were always destined to be overshadowed by the triumphs of her early work with Allen, much like the bulk of her latter-day career. If Allen would quit vandalizing his legacy, he’d be apt to use or, improbably, collaborate with Gerwig, who already contributed a bit part to his 2012 toss-off To Rome with Love as Jesse Eisenberg's briefly-glimpsed girlfriend. But, frankly, she doesn’t need him.

Greta Gerwig is a multi-hyphenate filmmaker of her own idiosyncratic creation. She isn't merely Baumbach’s muse anymore or the star that mumblecore made. Her Mistress America takes its nominal origins from a brief scene in which Gerwig’s Brooke announces that the title would be her ideal superhero name, to which Kirke counters that “mistress” automatically connotes something lurid. But through her own ambition, artistry, and authority, Gerwig is helping to re-align the term “mistress” with its original and more powerful alternate definition. If anything, Gerwig is her own muse: inspiring, refining, and redefining herself, all while captivating the many modern-day moviegoers who feel lucky just to be here, right at the moment that she has arrived.