Reflecting on the Golden Globes' Three Biggest Controversies, According to Film Twitter 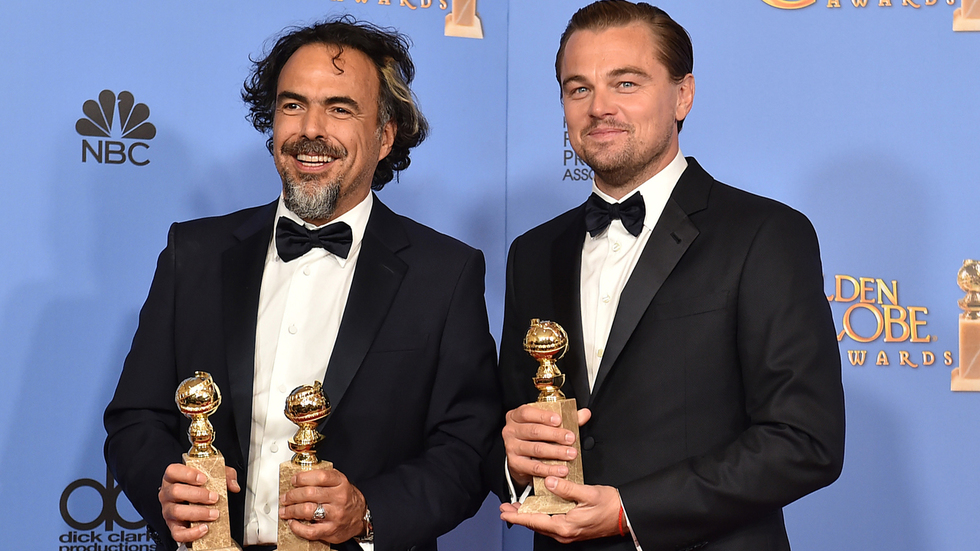 Unsurprisingly, the telecast gave Film Twitter’s jokesters plenty of ammunition. There was the widely circulated and retweeted GIF of Leonardo DiCaprio’s partly surprised/partly repulsed reaction after Lady Gaga bumped into him en route to accept her award for best TV miniseries actress for American Horror Story: Hotel; that shot of Master of None’s Aziz Ansari reading Losing to Jeffrey Tambor With Dignity while being announced as one of Transparent headliner Tambor’s competitors in the Best Actor in a TV Comedy category; Jason Statham’s still-in-Spy-character, playful on-stage mauling of director Paul Feig while Melissa McCarthy introduced their nominated film. Even the flat-lined jokes bungled by presenters generated memorable reactions, namely Jonah Hill’s awkward bit as The Revenant’s bear and Jon Hamm’s crickets-and-tumbleweeds-receiving Chumbawamba punchline.

Other times, Outrage Film Twitter can be justifiably up in arms. During Quentin Tarantino’s acceptance speech on behalf of G.O.D. composer Ennio Morricone for The Hateful Eight’s remarkably horror-meets-spaghetti-western score, the ever-candid director tried to defiantly stand behind the Italian music titan by claiming that Morricone has never won an award for one single movie,” which isn’t true at all—The Hateful Eight marks Morricone’s third time as a Golden Globe winner. (His previous two wins: The Mission, 1987; The Legend of 1900, 1998) The walking film encyclopedia that is Quentin Tarantino was either uncharacteristically misinformed, or drunk, or drunkenly throwing shade at the Academy Awards to both provoke them to nominate Morricone and give him his first real Oscar. (Morricone won an honorary one in 2007.) Worse, though, was how Tarantino compared Morricone to composers like Mozart and Beethoven by saying he's not part of "that ghetto," referring to composers who only score movies. Tarantino and his films have always been lightning rods, whether intentionally so or not, for racial uproar, mainly due to his films' rampant use of the N-word. His use of the term "ghetto" played right into that:

Foxx's CLAPBACK on Tarantino's use of the word Ghetto, after Foxx made issue of Straight out of Compton not being nominated?? LIVE 4 THIS.
— kelly oxford (@kellyoxford) January 11, 2016

In some rare occasions, Outrage Film Twitter can spark worthwhile debates and conversation. In the case of this year’s Golden Globes, that specifically happened with Sylvester Stallone’s acceptance speech for the Best Supporting Actor prize, for his heartbreaking and career-best work in the terrific Rocky sequel Creed. The second Stallone’s name was announced as the victor, Film Twitter collectively lit up with happiness—after all, who doesn’t love Sylvester Stallone? And who can’t get excited by the fact that he’s finally “acting” again thanks to Creed, instead of, you know, grunting a bunch alongside multiple other 50-plus-year-old former action movie stars? But then Sly talked through his “I want to thank…” mentions and never mentioned Ryan Coogler’s name. Coogler, for those who aren’t aware, is the breakout filmmaker behind 2013’s Fruitvale Station who directed and co-wrote Creed, and who’s essentially the reason why Creed exists.

Yet Stallone, who reportedly thanked Coogler to no end during his pre-show red carpet interviews, forgot to mention Coogler’s name during the broadcast—thanks to tweets from reporters who were inside The Beverly Hilton covering the event, it’s now known that Stallone ran back to the microphone to salute Coogler during the commercial break. While that’s good to know, it doesn’t change the fact that Stallone dropped the ball—not out of any kind of malice, of course, but simply because he was caught in an emotional moment that was being rushed by the teleprompter’s ticking-down clock, that cold-blooded “It’s time to wrap it up” signal that haunts all awards show winners.

Still, Stallone had the chance to use the huge NBC Sunday night platform to do something that few Hollywood actors ever get to do: big-up a young black filmmaker in front of millions upon millions of TV viewers. And, unlike the champ Rocky Balboa in his prime, he choked. In a movie industry that’s so frustratingly lacking in diversity behind the camera, it would’ve been a major moment to watch an old-guard icon like Stallone redirect the primetime television spotlight, if only for a few seconds, to an amazingly gifted up-and-comer like Coogler. A forgivable and honest mistake, but also a disheartening one.

Well. I'm gonna go ahead and thank RYAN COOGLER + MICHAEL B. JORDAN since no one else is. Thank you, brothers. Good work. #smh #goldenglobes
— Ava DuVernay (@AVAETC) January 11, 2016

Fortunately for Tarantino and Stallone, though, the night’s most diesel-caliber fuel for Outrage Film Twitter arrived at the end of the night, thus making people forget about the Morricone fact-checking fail and the broadcast’s maddening lack of Coogler name-drops. The first red flag surfaced when Alejandro González Iñárritu won Best Director for The Revenant and spent most of his time on stage reminding everyone about how “painful” and “difficult” the film’s notoriously dramatic and exhausting shoot was; another proverbial flag came when The Revenant won Best Picture, Iñárritu returned to the podium and again talked about the production’s toughness, echoing the woe-is-me sentiments voiced by Leonardo DiCaprio as he accepted his Best Actor in a Drama honor minutes beforehand. And they’ll both surely reiterate that point about The Revenant’s over-budget and nearly year-long making-of duration if the film wins Oscars next month, which seems very likely.

But the broken record syndrome has, at this point, worn dental-floss-thin. Those who’ve seen The Revenant can’t deny its filmmakers the right to discuss its atypically harsh conditions—Iñárritu’s brutal film is viscerally cold both in setting and in tone, and its chilliness is only matched by its Misery Porn disposition. It’s incredibly made but uncompromisingly bleak, and DiCaprio’s performance conveys that intensity in every frame. The problem is, everyone involved in The Revenant won’t let people forget any of that. Iñárritu gives interviews where he talks about DiCaprio’s overly eager and generally insane decision to eat a real bison liver was all about getting to the character’s “soul,” and “truthfulness,” which, despite Iñárritu’s best intentions, sounds like artsy-fartsy pretension. It’s hard to appreciate The Revenant when its multi-millionaire star is constantly made out to be some kind of artistic martyr while also making more cash for his efforts than most of its viewers could ever hope to see in their entire lifetimes. Inevitably, it’s hard to not start picturing Iñárritu playing the world’s smallest violin for DiCaprio as the latter curls up inside that horse carcass.

Hearing Iñárritu and DiCaprio regurgitate The Revenant’s difficulties last night sounded all the more obnoxious as the film beat out George Miller’s equally awe-inspiring Mad Max: Fury Road, which wasn’t exactly a picnic to make itself. Those explosions, car chases, and Cirque-du-Soleil-by-way-of-Thunderdome visuals and stunts you see in Fury Road are, for the most part, the real deal, sans CGI trickery like the kind used by Iñárritu to execute The Revenant’s undeniably bravura bear attack sequence. But Miller—who, keep in mind, is 70 years old—hasn’t once complained about Fury Road’s “difficulties” or used them as one-note talking points to generate sympathy and respect. He’s been letting the film speak for itself, and that’s why everyone loves the Mad Max franchise creator now more than ever before. The resentment that’s bubbling around Iñárritu hasn’t touched Miller’s good name, nor will it during this Oscar season.

In case you missed the Revenant pivot from "This was really hard" to "This is an issue movie," that was it.
— Mark Harris (@MarkHarrisNYC) January 11, 2016

When was the last time a film as bad as THE REVENANT won best picture over films as good as CAROL and MAD MAX?
— amir soltani (@amiresque) January 11, 2016

"The Revenant was extremely difficult to make." #GoldenGlobes #NerdistGlobes pic.twitter.com/QscMuWWJ8d

And if you think that’s rough, just think about what will go down if The Revenant wins the Academy Award for Best Picture. Film Twitter’s bear claws will be Freddy-Krueger’s-razors-sharp.