'Get Hard' Trailer Borderlines the Offensive

The actors are all very nice, but the trailer's music says otherwise. 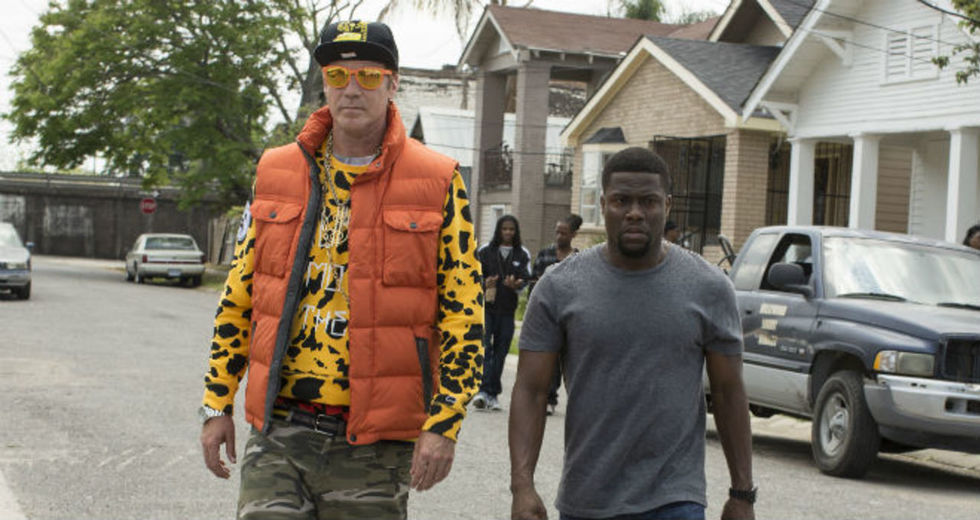 The second official trailer for Get Hard has hit the web and continues to draw the line between funny and offensive.  The cosmically inevitable buddy picture pairs Will Ferrell's "aggressive dork" persona with Kevin Hart's "exasperated realist" guy. Honestly, I'm shocked it took them this long to make a movie together, and when it opens on March 27, the world will make sense again.

Is This Offensive? All signs are pointing to yes. At the very least, it's not incredibly original to use an iconic rap song in a trailer about a bumbling white person. That juxtaposition -- street cred versus dopiness, "cool blackness" versus "dorky whiteness" -- is in the trailers for Tammy, Bringing Down the House and every other movie with a rapping granny. It's the quickest way to indicate that Hip-Hop  culture is the dangerous other, while white people hilariously try to imitate it.

The problem here is it reduces everyone to caricatures and stereotypes. Will Ferrell plays a white businessman who is sentenced to jail for financial crimes, then hires Kevin Hart's character to help him learn how to survive in prison. Get it?!?!? Will Ferrell's rich and white, so he can't possibly understand JAIL.

Just to drive that point home, we hear "Still D.R.E." banging on the soundtrack. The other beats on this track compliment the gangsta rap style that Dre and Snoop pioneered.

As it pumps through the speakers, it's supposed to make the distance between rich white dudes and hip-hop culture seem funny, and maybe right now, that's not a hilarious topic.

Despite the shortcomings here's the thing: The jokes in this trailer suggest the movie is commenting on all that, and not just for laughs. For one thing, Kevin Hart's character has never been to jail. He seems like a pretty boring guy, actually, and when Ferrell assumes he's been to prison, Hart just doesn't correct him. That's an interesting wrinkle! Suddenly, there's not just one "black world" in this movie that all the African-American characters are lumped into. It suggests there's going to be a little more nuance and intelligence in this  comedy. (Probably not much, though, since there's also a gag about Will Farrell having metal in his head.)

In other words, even though this trailer tune tempts us to expect a certain type of comedy, it ends up challenging our assumptions. I'm into that.

Does It Matter That It's Dre and Snoop? Yes! Dr. Dre is a world class producer and has famously become hip-hop's first billionaire.  Snoop Dogg's long career has seen him become an actor, reality star and Rasta ambassador. Both  are living proof that fearful assumptions about hip-hop culture are not based in reality. More to the point, they're reminders that in the world of this movie, Dr. Dre would probably be wealthier than Will Ferrell. Which is a nice bit of irony that you wouldn't get with a Drake song.

Will We Associate The Song With This Movie? Not a chance. For all the subtle irony it creates, this song is mostly just background music that's supposed to indicate "hip-hop authenticity" before we pay attention to the story.

Overall Trailer Tune Effectiveness: The interaction between the song and the dialogue are obvious yet still surprising, so I'm going to give this one a cautious thumbs up.