In her Oscar-nominated documentary, the trailblazing filmmaker continues to look at the world with a gaze both wondering and humane. 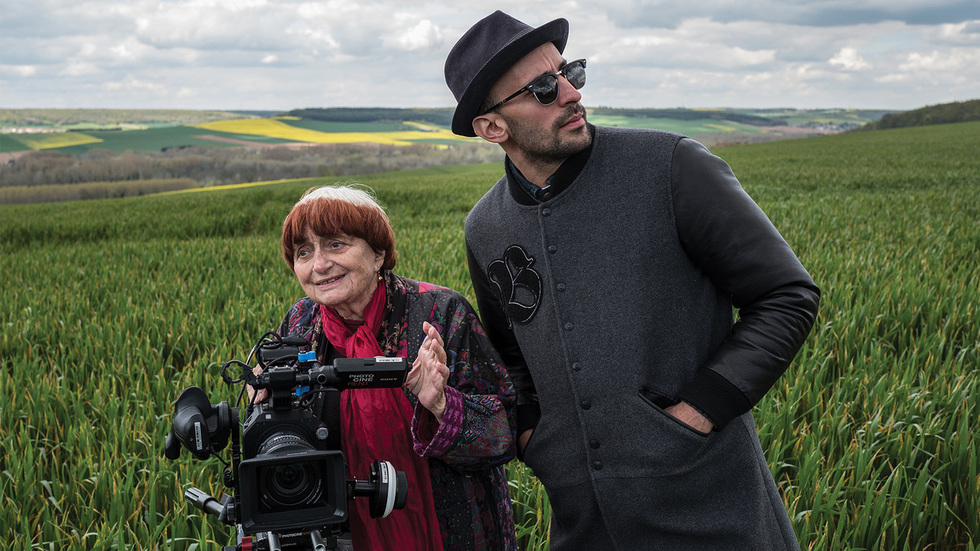 Early on in Agnès Varda and JR’s documentary Visages Villages (vaguely translated for English-speaking audiences as Faces Places), the 89-year-old Nouvelle Vague pioneer lays out a sort of free-floating mission statement for the artistic experiment to follow. Sitting across from her new friend at the kitchen table in her longtime home on the rue Daguerre, Paris, a plate of cookies cozily situated between them, Varda assuredly proposes, “We’ll make images together but differently.” Faces Places chronicles an extended road trip through the French countryside undertaken by these two artists, who roam from village to village in JR’s massive truck, which also doubles as a large-scale photo booth of magically indeterminate functionality. Together, they capture the villagers they come across, he taking and blowing up their portraits to larger-than-life proportions and pasting them around the towns these men and women call home, she directing and documenting the exercise with the assertive intuition and insatiable spirit of inquiry that are Varda’s trademarks.

Varda is widely regarded as one of the most inventive and tireless directors of her generation, an adventurous artist thrillingly untethered to any single genre or storytelling form. And yet Faces Places marks the first of Varda’s films to ever receive an Oscar nomination (for Best Documentary Feature), a point that speaks less to the merit of her filmography than it does to the Academy’s notorious, gradually-correcting myopia. (Varda received an honorary Oscar from the Board of Governors last November.) So what makes Faces Places so exceptional, aside from the rumored likelihood that this may be the aging luminary’s inevitable swan song?

Varda first began trotting the globe with JR in 2014 after her daughter Rosalie, a costume designer and producer on the film, initiated a coffee date between her mother and the sunglasses-sporting French photographer who is the elder Varda’s junior by over half a century. Although critics, reporters, and audiences alike have commented a great deal on the odd unlikeliness of these now inseparable accomplices-in-art, few recent cinematic collaborations have made more immediate sense. After all, one of Varda’s first jobs before becoming her era’s leading female auteur was shooting actor headshots at Paris’ famed Studio Harcourt, and JR’s career-long interest in reproducing the images of people from across different epochs, continents, and cultures is directly paralleled in Varda’s own on-and-off career as documentarian in features and shorts like Du Côté de la Côte, Black Panthers, Mur Murs, The Gleaners and I, and The Beaches of Agnès, a body of work that spans six decades and copious walks of life.

This inquisitive spirit guides and suffuses every single frame of Faces Places. Together, Varda and JR embrace the infinite possibility of the road and its ever-renewable potential for camaraderie, training their separate camera-eyes on countless individuals throughout the course of the film’s 90-minute runtime. Some subjects are probed for a fuller account of their lives and views, while others happily continue on paths unseen by our eyes but whose forward progression can still be felt, off-camera. Even those who flicker upon the screen for little more than a blink take on an aura of fleeting fascination, each one a multicolored thread in the stretchy patchwork quilt that is this freewheeling film’s chosen structure. A thriving farmer who tends to his sprawling acreage all by his lonesome — and whose full body is later photographed and affixed on the side of his barn by JR — can inspire as much interest as the various multiethnic families that the production happens upon during a local picnic at an abandoned, tumbledown housing site. At this last event, the camera settles on a young woman with the same sparkling, catlike eyes as Cléo, the flighty but evolving heroine embodied with dreamlike elegance by Corinne Marchand in Varda’s wondrous, sharp-witted masterpiece, Cléo from 5 to 7. Did Varda (who co-edited Faces Places with JR cohort Maxime Pozzi-Garcia), JR, or any one of their seven cinematographers recognize this resemblance during shooting or post-production? Possibly, or maybe this is one of the many stray, flyaway observations that these filmmakers eagerly invite viewers to make throughout the duration of their project, whose points of preoccupation often lie in the eyes of its beholders.

Very little is forced in Faces Places, which comes to embody the casualness of Varda and JR’s own fellowship, itself defined by exchanges of a terse yet cozy familiarity that bespeak a friendship seemingly decades-long. But we are also made privy to plenty of getting-to-know-you conversations about family, relationships, and other miscellanea that are peppered throughout the film and serve to remind us of the relative freshness of this duo’s acquaintance. They remain perpetually honest at all times and thus inspire an air of similar honesty in the people they spotlight, like the sweet, beautiful barmaid from the Provençal commune of Bonnieux who JR snaps barefoot, holding an antique bridal parasol that belongs to the late mother of the village bellringer. When asked, months later, how she feels about her towering image being pasted to the facade of the building directly opposite the bar where she works, thus becoming a stopping place for many a flash-happy tourist, the woman shyly but sincerely admits that it makes her more than a little uneasy to be rendered an easily recognizable star in her tiny town.

Some of the zestiest scenes in Faces Places find Varda and JR bantering over her general dotage and his admittedly dubious refusal to remove his shades (a habit that also belonged to Jean-Luc Godard, a former friend and colleague of Varda’s), or else giving voice to their at times contradictory opinions about how best to put together the dozens of murals made and displayed in the film. The inclusions of these discussions, which can sometimes verge on the crotchety or sardonic, are always rooted in a place of truthful passion, complicating the reductive headline-readiness of the film’s central premise (“Kindly Old Lady Makes Art with Hipster Shutterbug”), while also providing the audience with the thought-provoking thrill of watching a finished work while simultaneously observing the process through which it was carefully but unpredictably pieced together. (It is worth nothing the skillfulness with which the camera crew following and recording Varda and JR have been rendered very nearly invisible both during production and in the editing room, perpetually keeping focus on the filmmakers and the numerous people they encounter during their travels.) The film cheerfully changes its course and follows wherever Varda and JR wander: a salt factory in Château-Arnoux-Saint-Auban where the pair stages an exuberant group portrait of the plant’s longtime employees; a modest, off-the-beaten-path graveyard where Varda’s friends, the married photographers Henri Cartier-Bresson and Martine Francke, are buried; the port city of Le Havre where Varda and JR arrange a lovely homage to the willing wives of three local dockworkers using the harbor’s polychromatic shipping containers. Many of these pitstops are planned, but Faces Places as a whole could have only emanated from its filmmakers’ deep appreciation for the strange and impetuous. In one village, they accompany a toothless, long-haired homeless man named Pony, who would have fit right in among the proudly uncompromising, off-the-grid individualists interviewed by Varda in The Gleaners and I, far into the forest. Once there, Pony invites them into his hidden fortress, a rainbow-colored wonderland assembled with incalculable doodads and knick-knacks.

In addition to its exploratory quest to raise the everyday to a level of grandeur, Faces Places distinguishes itself amid Varda’s prior work for its unblinking meditation on aging and ailing. The eye disease that continues to blur Varda’s vision increases in scope from a passing reminder to one of the film’s primary subject matters. During one of Varda’s eye surgeries, to which her co-director accompanies her, the camera locks on Varda’s eye as it is punctured by a needle, a sensation she compares to the notorious, nightmarish eye-slice of Luis Buñuel’s avant-garde touchstone Un chien andalou. Later, JR reproduces one of Varda’s eye exams on the steps of a building, using real people, each one holding a separate letter on a placard. These are fanciful touches, but the experience they illustrate can be startlingly authentic, especially when Varda is at her most candid and unfiltered. “Every new person I meet feels like my last one,” Varda groans at one point to JR, who reflexively chides her for such morbidity, but the sentiment is soberingly resonant and adds a bracing, ticking-clock urgency to this image-making expedition.

Although most of Faces Places is devoted to making and celebrating new friends, Varda and JR also carve out time to movingly honor their loved ones, near and departed, like Cartier-Bresson and Francke, but also JR’s adorable, 100-year-old grandmother, whom Varda and JR pay a mid-film visit to in her apartment. At one point, Varda's fellow elder laughs with tender knowingness when asked if JR will remove his sunglasses on this reverent occasion. (He won't.) Later on, Varda also attempts to reconnect with an octogenarian comrade now estranged: Godard. The famously elusive French iconoclast manages to upend Varda’s movie without even entering the frame. In the film's final moments, Varda and JR pay a visit to his estate in Switzerland, only to find that her onetime associate is nowhere to be found, leaving only a cryptically srawled message on one of his window panes that stirs up the memory of Varda’s beloved late husband, the director Jacques Demy, and ultimately causes her to weep. The nakedly vulnerable reaction that Godard’s cold-shoulder spurs in Varda prompts an unspeakably tender act of generosity from JR, but the very inclusion of this snub in the completed film is strikingly indicative of Varda’s overarching cinematic credo, which is possibly best defined as an acceptance of all that life has to offer, its pleasures and its pains.

Varda continues to use her art not as a shelter but as a vessel for voyaging into uncharted territories of emotional and existential promise. In her eyes, no subject is unworthy of commemoration and all filmmaking endeavors have the capacity to be truly egalitarian experiences, presided over by a director or two, but molded and transformed by many viewpoints, the audience’s included. Shaped by countless collaborators, Faces Places is a radiant act of warmth, whimsy, and love, both newfound and eternal. If this indeed turns out to be Varda’s final effort then rarely has a swan song ever felt as rich with spontaneity and curiosity. It is as remarkable for the visual experience assembled before our eyes as for the hard-won pieces of wisdom that remain etched in our heads and hearts long after the actual filmgoing experience has faded to black.

You lose friends, but you make new ones. You remember, always. And sometimes, in between all the loss, remembrance, and discovery, you find the courage to create, gloriously.