For the remainder of 2015, we’ll be nudging Academy voters toward deserving films, performers, and craftsmen who risk getting lost in the Oscar shuffle. This week: a jarringly under-rewarded cinematographer hits a career apex in the year’s best picture. 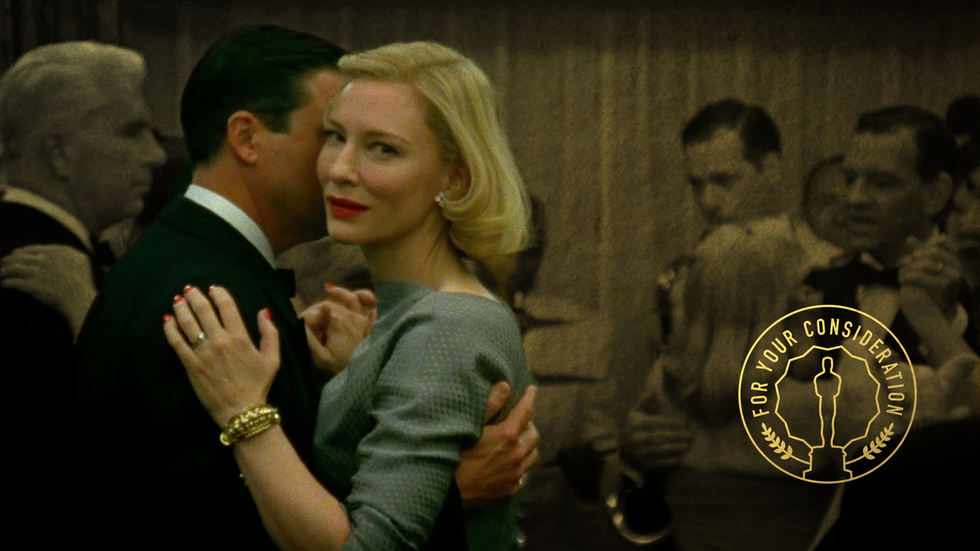 Some movies change your life forever.

Todd Haynes’ Carol is not only one of the year’s most walloping cinematic achievements, but a fortifying moment in contemporary American moviemaking where so many critics and audiences are cheering a heart-stirring, fifties-era lesbian love story not only for the progressiveness of its existence but for the rare virtuosity of its overall execution.

Carol has been pristinely performed by leading ladies Cate Blanchett (at the absolute peak of her powers) and Rooney Mara (discovering hers), as well as first-rate supporting players like Sarah Paulson and Kyle Chandler. It has been brilliantly scripted by Phyllis Nagy, who subtly restructures Patricia Highsmith’s seminal source text The Price of Salt so as to generously consider its central romance from the perspectives of both participants. It has been cut with suggestive precision by Affonso Gonçalves, designed with period-specific particulars by Judy Becker, scored with mournfully majestic understatement by Carter Burwell, and costumed with layers upon layers of breathtaking, character-revealing detail by the indomitable Sandy Powell. And it has all been mounted by Todd Haynes, the most important director-cum-deconstructionist working in film today, who has imbued this classical narrative with weeping-heart emotion and a postmodernist eye that valiantly succeeds in wrestling back Highsmith’s story from the clutches of foolhardy critics who are all too eager to declare, “Look how far we’ve come!” One of the laziest habits within Carol’s primarily ecstatic critical reception is to passingly compare Haynes’ latest film to Far From Heaven, Haynes’ earlier venture in impeccably-mannered American repression. It’s an understandable tendency: both films are set in the fifties and take an increasingly atypical interest in the personal lives and desires of mainly domesticated women, with a marked investment in queer tales and marginalized characters. And, you know, they also happen to feature fabulous actresses wearing era-distinct ensembles to fierce-as-fuck perfection.

But, really, the transparent Sirkian embodiments of Heaven couldn’t be farther in look, feel, and temperament from the more starkly lived-in reality of Carol. And this distinction is never clearer than in the wondrous work of D.P. Edward Lachman, who framed Far From Heaven’s stiflingly saturated vision of Eisenhower-era suburbia so exquisitely and has contributed to Carol the year’s best and most inspired cinematography.

It’s surprising to hear critics and audiences swoon over the visual splendor of Carol, because truthfully – and I say this with maximum praise – Haynes has never made a dirtier-looking film. As Carol’s circular story takes us from Lower Manhattan and small-town New Jersey to America’s mostly rural Midwest, Haynes and Lachman constantly remind us that, actually, the fifties weren’t all manicured lawns and lacquered interiors, an impression of the time that we have gleaned from the decade’s filmmakers, who hyper-accentuated these surface elements to expose the social issues and unspoken perversions that occur in plain view of such outward artifice. But Haynes and Lachman aren't trading in artifice, at least not in this picture. What they've achieved instead is a remarkable visual purpose that blends the unvarnished realism of the period's street photography from the likes of Helen Levitt, Vivian Maier, and Ruth Orkin, among countless others, with such expertly-muted stylistic flourishes that tint and rearrange these already naturalistic snapshots and fluidly rouse them to walking, talking life. From Carol’s opening moments, in which Lachman’s wandering camera takes us from a close-up of a subway grating to the busy streets of midtown, you can see the wintry breaths of passersby and almost feel the grit of rain-swept pavement underneath your feet as we follow a man who serves as an corporeal McGuffin into the worlds of Blanchett’s titular housewife and Mara’s love-struck shopgirl Therese, whose relationship we enter at its supposed end rather than beginning. Not long after, Lachman frames a forlorn Mara from behind the condensation-covered window of a moving car as she looks out on the smoggy, deliberately-underexposed streets of Manhattan. She eyes a group of anonymous young boys as they chase each other down a city street, darting in and out and of shadows. She then lingers on a man walking with a tall blonde woman, the latter a hazy ringer for Carol, and suddenly we are transported back to the toy section of the department store where Carol and Therese’s abbreviated but all-consuming love affair first began. In moments as early as these, Lachman distinguishes himself – yet again – as a deft visual storyteller who isn’t at all interested in maintaining the “prettiness” of his moving pictures.

In contrast to a film like Tom Hooper's The Danish Girl, which places all of its photographic efforts into manufacturing ostensibly “attractive” images of skylines and seasides that say nothing about the people occupying them, Carol is able to convey entire emotional states and shifting psychological gradations through Lachman’s masterly grasp of color and light. His work with filters is particularly galvanizing, tinging each image with Christmas reds, grainy grays, frosted whites, and sickly greens that accentuate the characters’ interior lives without drawing undue attention to the work itself.

Lachman utilizes such conspicuous style not to conceal Carol and Therese's mindsets but to break them apart, graphically telling their stories through images that seem to emerge from the inside-out. Every single twitch, shudder, and crinkle that unfolds on Blanchett’s naturally serene face – one of the most remarkable in contemporary cinema – is up there on the screen, just as Mara’s naturally dark features – those piercing eyes! those furious brows! – have never looked warmer. Lachman frequently frames each actress from behind murky windowpanes or else unobstructed in mirrors, quite literally – but never bluntly – indicating each shift in their personal journey through revealing reflective surfaces. But that doesn’t mean he hasn’t considered this couple from other vantages as well. It’s not largely because of Lachman that Carol becomes a love story seen from multiple angles, briefly privileging the perspectives of those outside this couplehood, whether it be that of Chandler’s fretful husband or Paulson’s candid best friend, whose increased prominence in the script and the cinematography allows us to view her as an authoritative figure constantly watching from a self-imposed distance, which, in turn, lets us see Therese in a new light, as a lovelorn invalid and deserted child carefully being monitored by Paulson from elevated positions. 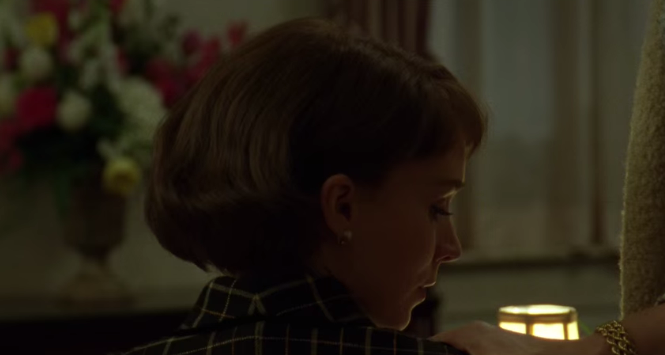 But Carol is, after all, a delicate duet between Mara and Blanchett, and Lachman furnishes lavish cinematographic attention on the two without necessarily relying on the type of stock close-ups that plenty of lenspeople usually turn to in projects that can typically be described as “actor-driven.” Carol is a masterpiece driven by every single filmmaker involved, but it’s Lachman’s sumptuous contributions that have already set up permanent home in my brain.

A drive to New Jersey casts the Holland Tunnel as – of all things – a Tunnel of Love, wherein Carol and Therese share their first of many rapturous car rides in a space that is at once intimately enclosed and yet somehow boundless thanks to Lachman’s illusory lighting. Blanchett and Mara’s first sex scene is a golden-hued triumph of breathtaking eroticism that almost made this viewer burst into tears, but even more indelible is a later shot of Blanchett and Mara asleep in bed, huddled together so that their limbs become very nearly indistinguishable as Lachman’s camera trails down the bed before settling on their entwined arms. There’s a perfect symmetry to shots like these, just as there is in what may be the film’s defining image: a close-up of Mara’s turned, bowed head, captured from behind as Blanchett rests a soft hand on her shoulder before the two seemingly part for good in a hotel restaurant. You could scour entire decades of movie history and not find a more succinctly ravishing image of bonded and bottomless love.

We will surely see Carol in plenty of races come nomination time and yet I still fear that Lachman isn’t the Oscar lock he should be. His work isn’t breaking new visual ground in the way that reigning two-time category champ Emmanuel Lubezki consistently does, even though more attention should by all means be paid to crafty visualists who convey their films with a subtle visual grammar that is most appropriate for the story at-hand and doesn’t always require attention-grabbing flash or innovation. Lachman has only one monumentally-merited Oscar nomination to his name (for Far From Heaven in 2002), despite maintaining one of modern moviemaking’s most adaptable and idiosyncratic craft careers that has crossed paths with auteurs as distinctive as Robert Altman (in A Prairie Home Companion), Larry Clark (in the scandalous Ken Park, which he also co-directed), Sofia Coppola (in The Virgin Suicides), Mira Nair (in Mississippi Masala), Ulrich Seidl (in the Paradise triptych), Steven Soderbergh (in The Limey and Erin Brockovich), and, of course, Haynes, who has enlisted Lachman’s invaluable eye on every project post-Heaven. It’s easy to understand why. Lachman is one of those rare cinematographers whose staggering images blur the line between movie and personal memory so inextricably that it becomes a near-impossibility to simply tell the difference. It has been less than two months since I first surrendered myself to Carol's spell, but I can already say, with total and abiding confidence, that Ed Lachman has peerlessly shot some of my most beloved memories.