Home » Tribeca News » WATCH: This is What the First Woman Superhero Movie in Decades Will Look Like
View All News

WATCH: This is What the First Woman Superhero Movie in Decades Will Look Like

Marvel better hope that CAPTAIN AMERICA: CIVIL WAR is next-level great, because DC is coming for their jugular. 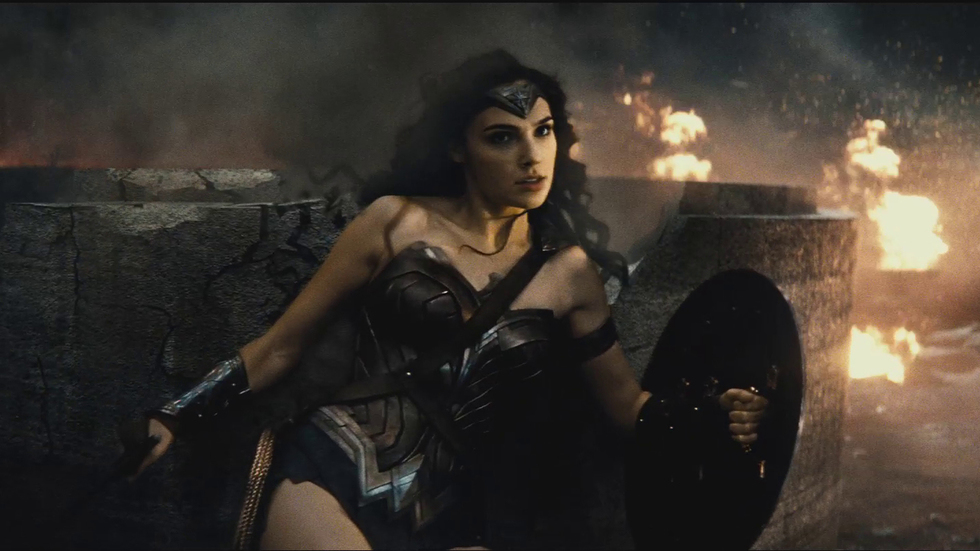 Last night, TV's airwaves were an exercise in feminine duality.

On the unwatchable side, there was Sarah Palin giving a speech in which she endorsed Donald Trump's presidential campaign, and, unsurprisingly, the monologue wasn't far removed from the kind of supervillain psychobabble you'd find in a poorly written superhero movie. But over on The CW, however, DC Comics fired a three-pronged missile directly at Marvel Studios' cinematic universe, although one of the prongs, the new footage from Zack Snyder's Batman v. Superman: Dawn of Justice, paled in comparison to the other two. Because DC also premiered the brand new trailer for David Ayer's bonkers-looking antihero mash Suicide Squad and the first clips from Patty Jenkins' long-awaited Wonder Woman, and both kicked major ass. Thanks to Gal Gadot's Wonder Woman and Margot Robbie's Harley Quinn, the latter dominating the Suicide Squad preview, Sarah Palin's nonsense was easily ignored by most.

Having enticed even the most jaded of superhero movie cynics with its first trailer last year, Suicide Squad now officially looks like cinematic heaven for everyone who's grown tired of Marvel's fun yet routinely familiar movies. Ayer's film looks like DC's Guardians of the Galaxy next to Batman v. Superman's Avengers: Age of Ultron, except that Suicide Squad appears to have much more in the way of gleefully madcap insanity.

In Suicide Squad (which opens on August 5), the ensemble of Robbie, Will Smith (as the sharpshooting Deadshot), Joel Kinnaman (the semi-normal team leader, Rick Flag), Jai Courtney (the self-explanatorily named Boomerang), Adewale Akinnuoye-Agbaje (the man-eating Killer Croc), Jay Hernandez (the fire-starting El Diablo), and Cara Delevigne (the possessed-by-a-witch Enchantress) play a rogue's gallery of bad guys recruited by Viola Davis' shot-calling government agent Amanda Waller to save the world from the sadistic reign of Jared Leto's incarnation of The Joker, and while the initial trailer hinted at something Christopher-Nolan-dark, this new Suicide Squad trailer rides the rambunctiousness of Queen's "Bohemian Rhapsody" to reveal the film's actual tone: anarchic joy. Dudes blasting machine guns while wearing panda bear suits, Will Smith unloading two guns worth of rapid-fire rounds while positioned on top of a car, the usually bland Jai Courtney defying the haters and exhibiting a personality whilst taking a beer break during mayhem, and Robbie completely owning Harley Quinn's dangerous sexuality and one-liner-armed wit.

As for Wonder Woman (in theaters June 23, 2017), the footage released last night was minimal and spliced between Kevin Smith's interview with DC creative officer Geoff Johns about the iconic Amazonian character. But the little that was shown implies that Jenkins' film won't look or feel like any of the other recent superhero flicks, which is a huge plus. With housebound action and swordplay, Wonder Woman looks a bit like the first Captain America movie as remixed by a Game of Thrones director. The coolest thing about how intriguing Wonder Woman's footage is, though? This is the first sign that the millions of female comic book lovers who've longed to see a woman hold down her own superhero movie have every reason to get pumped for Jenkins' efforts.

Rather than also post the new Batman v. Superman clips here, you're better off just enjoying what Suicide Squad and Wonder Woman have to offer for now. Batfleck has nothing on Margot Robbie or Gal Gadot.