With over 1,566 possible versions and multiple endings, every performance of ‘Choose Your Own Documentary’ is guaranteed to be a unique experience. 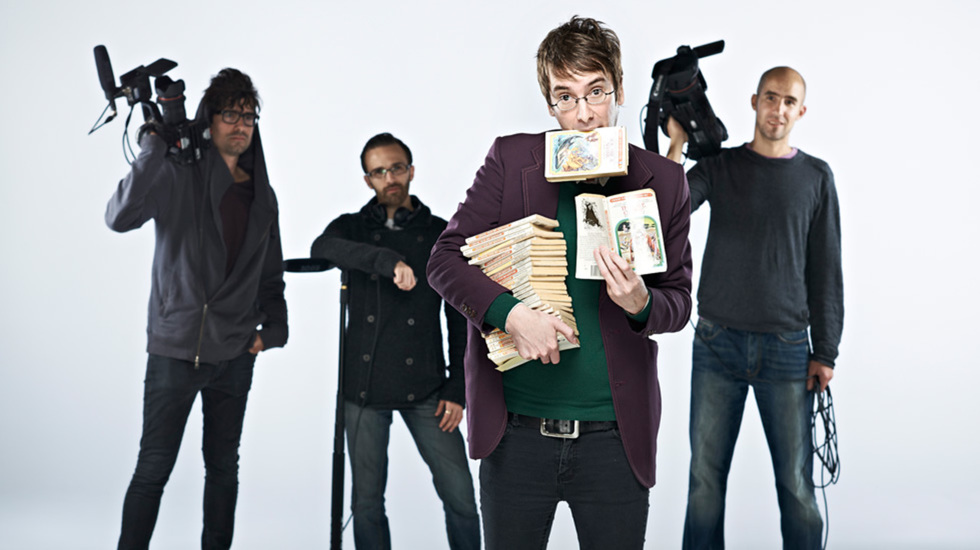 Our 2nd annual Storyscapes program, created in collaboration with Bombay Sapphire®, celebrates new trends in digital media and the filmmakers and content creators who employ interactive, web-based or cross-platform approaches to story creation. The team behind Choose Your Own Documentary—Nathan Penlington, Fernando R. Gutierrez De Jesus, Nick Watson, and Sam Smail—talks with us about blending compelling storytelling with the power of choice to make one incredible interactive journey.

Tribeca: Tell us a little about Choose Your Own Documentary. What was the impetus behind this project?

CYOD Team: Explaining Choose Your Own Documentary  is always a little tricky! In its simplest form, it’s a true human story of mystery and obsession that began when Nathan found the forgotten diary of a boy named Terence Prendergast inside some Choose Your Own Adventure books he bought on eBay.

So the story came from the natural intrigue of finding out what happened to that boy and where he was over 20 years later.  The impetus for the project is a little different – it’s a live, interactive film using the format of the "Choose Your Own Adventure" books to put audiences in control of the quest. It was Nathan and Terence’s love of these books that instigated everything and it seemed fitting to tell that story in the same style as the books.

Tribeca: When did your group first realize that the “Choose Your Own Adventure” books could translate to another medium?

CYOD Team: Probably not until the first audience had experienced the "Choose Your Own Adventure" format. It had been used in other media before but the real challenge in this instance was that we weren’t telling a fictional story. This was a real story with lots of branches, off-shoots and multiple endings. Somehow  all the components had to stay true to life and still make sense, and it’s fair to say we didn’t know if we’d accomplished that until we first tried it out with an audience. Thankfully, it worked and people found the ability to choose how their story unfolded to be a really immersive and engrossing experience—the fact that they were watching something real only enhanced that reaction.

Interactivity is a brilliant thing to bring to audiences, but strong stories are still just as important.

Tribeca: How did the four of you come together? Can you discuss your collaborative process?

CYOD team: Nathan found the diary a number of years ago and knew he wanted to find Terence and tell his story in the manner of "Choose Your Own Adventure" – but he had no idea where to start. Through a few mutual friends, we all found one another, and the story quickly sparked the same sense of adventure in us all.

It was always conceived as a genre-bending project. As creators, we all have similar personalities, so in terms of having a common vision and tone it was quite easy. Nathan is a great storyteller who creates an intimacy with the audience, but that feeling is hard to maintain with all the branching narratives. The story could have been told in a one-man show or through a traditional linear documentary – both would have still been hugely compelling. Yet mixing these two storytelling forms has made the experience so much more immersive and created something far richer than the sum of our parts.

Tribeca: Was it difficult to marry theater and documentary filmmaking?

CYOD team: We always intended to marry the two but the documentary side was a real step into the dark for a number of reasons. As filmmakers this was something that actually attracted us to the project – was it even possible? Interactive fiction is one thing, but telling concurrent narratives that all had to be real posed a huge headache.

How can one story have multiple endings that feel substantial and satisfying? There were all these questions that we didn’t know how to answer. It took a lot of work, walls of Post-It notes and many discussions before we worked all that out. Somehow we got to a place that now has 1,566 possible paths, an abundance of characters to meet, and multiple endings, each with its own unique emotional impact.

Tribeca: The nature of your installation is that every performance must be very different. How does Nathan manage this as a performer? Do you have a favorite version of the story?

CYOD team: Nathan has to contain the information of all these different pathways in his head for every show, so it’s certainly not easy. We’re completely in the dark as to how the film will play out or what audiences will choose, so Nathan must be armed for every eventuality. We’ve done over 50 shows now and there are still some choices we’ve never seen ourselves!

As for a favorite version, that changes all the time. Making this took around two years, so each story brings back different memories or reminds us of people and places we encountered along the way.  Each story can vary so much so I think the favorite thing may be seeing how each audience responds to the choices in its own different way.

Tribeca: What can Festival audiences expect from the Choose Your Own Documentary installation?

CYOD team: Well, that all depends on the choices they make! We’ve actually been quite taken aback by how audiences have reacted to it. It’s obviously a captivating story to find an old diary, but it’s been incredible to see how invested people get in Nathan’s journey. Some paths can be funny, some are revelatory, and others are very emotional. It’s not unusual for us to have gasps or cheers or even crying at a screening.  Sometimes all at the same time – it can be a real emotional roller coaster.

Tribeca: You’re currently on tour with Choose Your Own Documentary. How does the set-up vary from place to place? What’s the best part of taking your show on the road?

CYOD team: The experience is centered on the big cinema screen and Nathan on stage, so it’s quite easy to do the set-up in lots of different places. We’ve done it in a number of venues now. The best thing is introducing new audiences to the story and sharing the adventure with them. Each audience can be very different – sometimes they make reckless, gung-ho choices; others are more sensitive and inquisitive. It’s great to see how that plays out.

Tribeca: What is the future of Choose Your Own Documentary? Have you thought about a smartphone app?

CYOD team: Right now, we’re looking at bringing the experience to as many new people as possible, and we actually have a smartphone app in the works at the moment too. The biggest thing on the horizon right now is the accompanying book, The Boy in the Book, which is published in the UK on May 22nd and details the full story of the journey to find Terence Prendergast.

Interactive fiction is one thing, but telling concurrent narratives that all had to be real posed a huge headache.

CYOD team: This is our first time taking the full show to the US, so it’s incredibly exciting to bring it to an American audience, particularly as the books were such a big deal in America and so fondly remembered by a certain generation.

All the Storyscapes projects are so different and creative, and it’s great that there is a dedicated space for these projects at the festival. We’re really looking forward to being a part of it and experiencing all these new ways of telling stories and connecting with audiences.

Tribeca: Where do you think the future of interactive storytelling is headed?

CYOD team: It’s definitely an exciting time. So much is happening across so many different platforms. Interactivity is a brilliant thing to bring to audiences, but strong stories are still just as important, so hopefully we can get spoiled by having the best of both worlds as it all continues to evolve.

CYOD team: It seems to mean different things to different people, but for us, strong storytelling is the most important part. We’ve been listed or reviewed as everything from transmedia, theater, cinema and even a play, but as long as people connect with the story and go on a meaningful journey, then they’re welcome to choose their own label too!

Experience Choose Your Own Documentary in person at the Bombay Sapphire House of Imagination running April 23-26. Registration is now open!