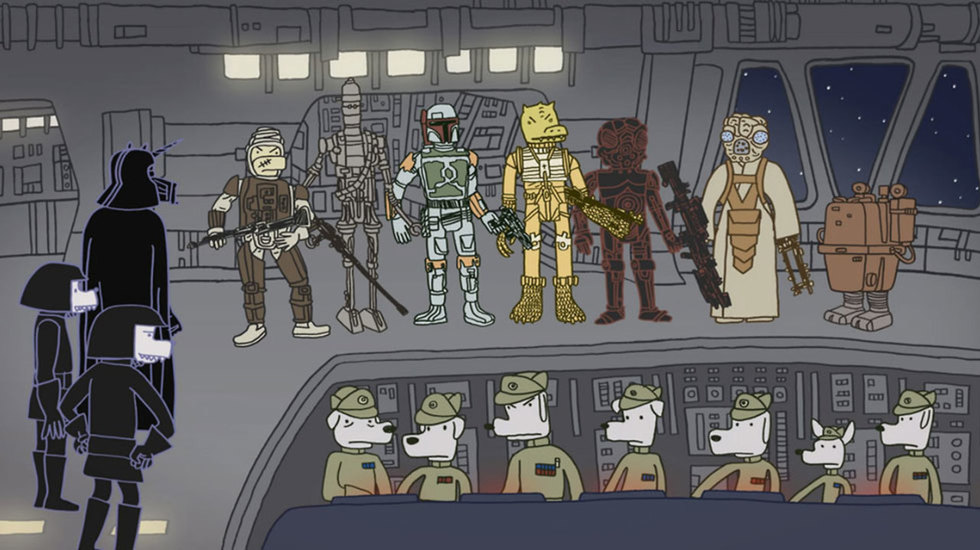 Our inaugural Storyscapes program, created in collaboration with Bombay Sapphire®, celebrates new trends in digital media and the filmmakers and content creators who employ interactive, web-based or cross-platform approaches to story creation. We spoke to Casey Pugh about his Emmy-winning re-imagining of the beloved Star Wars series, created by the fans themselves 15 seconds at a time.

Tribeca: Tell us a little bit about Star Wars Uncut.  What inspired you to crowdsource one of the most iconic films of all time?

Casey Pugh: I love Star Wars, and I love making interactive experiences for people online. I had been working with video for a long time, and I realized that the passion and devoted fandom in the Star Wars universe was the perfect generator for a crowd-sourced project like this.

Tribeca: Can you describe your first Star Wars related memory? Which is your favorite movie from the original trilogy?

CP: The movies themselves were my first memory—my favorite original is The Empire Strikes Back. Otherwise, I played a lot of Star Wars video games. I loved playing the games because I was immediately able to enter the Star Wars universe. Plus, the John Williams soundtrack accompanied almost every game, so everything felt extra-epic.

Tribeca: How did you first approach LucasFilm with the initial idea of making Stars Wars Uncut? What was their reaction?

CP: Lucasfilm has been very supportive of Star Wars Uncut and are just as excited to see fans get involved. I even blog about Star Wars Uncut on their official Star Wars Blog where I curate some of the best Uncut scenes. We look forward to collaborating with them more in the future.

Fans have been able to be infinitely creative.

Tribeca: Were you at all surprised by the thousands of fans and filmmakers who participated in the first Star Wars Uncut project? How important was their support?

CP: I was definitely hoping people would get excited about it, but it has been awesome to see just how excited they got. Every fan is very passionate, and we’ve had thousands participate. For The Empire Strikes Back Uncut, we’ve had almost 1500 submissions, and most of those are team efforts. Their support was very important because, well, it is a crowd-sourced movie. Uncut is about the fans’ involvement first and foremost.

Tribeca: How did you establish the rules for participating in the making of Star Wars Uncut? Why is the cut-off 15 seconds per scene?

CP: I wanted to make the scenes a manageable length so that people would be encouraged to participate. Remaking the whole movie sounds like a Herculean task, but you can wrap your head around 15 seconds. With a short scene like that, fans have been able to be infinitely creative.

Tribeca: Star Wars Uncut won an Emmy back in 2010 in the interactive media category. Can you describe that experience?

CP: It was incredible! Starwarsuncut.com was the first broadband-only project to win for the category. It was awesome to be recognized next to all these big TV/movie projects with big budgets that had lists of other accomplishments. We started as a little bootstrapped dream, so it felt like a big leap for us to be up there on stage.

Tribeca: What can Festival audiences expect from the Star Wars Uncut’s installation?

CP: The installation is all about showing the vast universe of Uncut fans and their creativity. The Star Wars Uncut Wall will show Empire Uncut scenes, which you can explore by character (Chewbacca, Han, C3PO, etc), setting in the movie (Hoth, Dagobah, Star Destroyer, etc), or just by what catches your eye.

CP: I’m definitely excited to watch some great films and meet the filmmakers, but also I can’t wait to experience the other Storyscapes installations. I’m proud to have the Star Wars Uncut installation among such amazing peers.

Tribeca: What technology can you not live without?

CP: My computer, of course. It’s my creative tool and would be no where without it. I’m always an early adopter; it’s what keeps my tool sharp.

CP: Transmedia is a word someone invented because they couldn’t fit something into a media category. And then there’s the fact that media/techies love buzzwords.  I’m always excited about cross-platform projects as ways to tell stories. They’ve been happening for a while, and I like the potential for more audience interaction.

From April 19 - April 21, Starwars Uncut, along with our other four Storyscapes selections, will be featured in a public, interactive installation at the Bombay Sapphire® House of Imagination (121 Varick Street, 7th Floor).