EXCLUSIVE: The Making of 'Les Bosquets' With JR 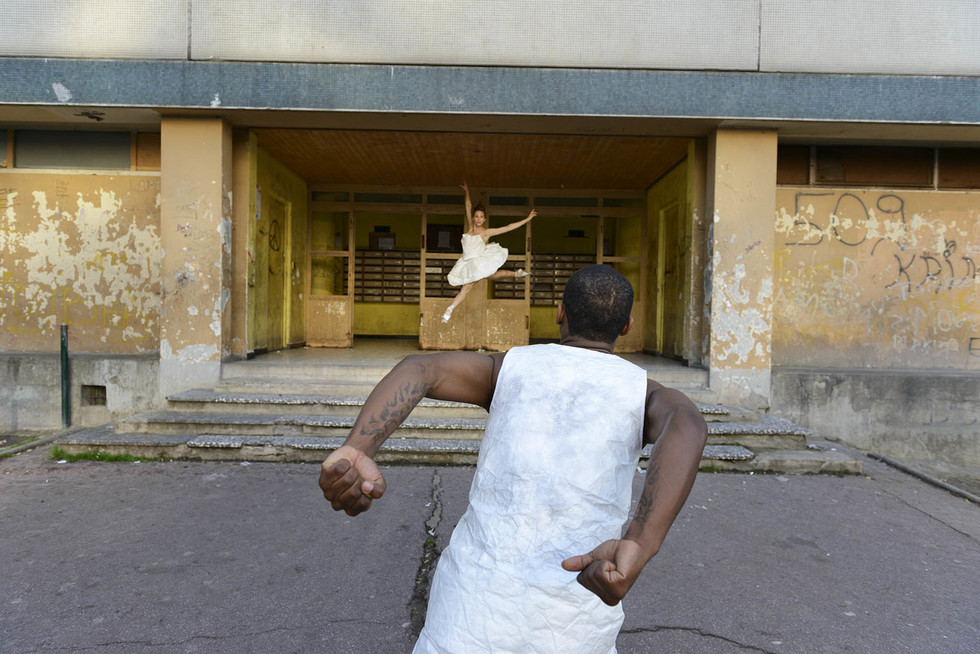 VIDEO: THE MAKING OF LES BOSQUETS

“I help people to enlarge their story,” artist JR tells me. “That's the whole idea of my work.”

We are speaking about his film Les Bosquets, which will premiere on April 26 at The Tribeca Film Festival. The seventeen-minute film is the culmination of JR's work over the past twelve years in Les Bosquets, a housing project in the Parisian suburb of Montfermeil, which became notorious as a site of the riots that erupted throughout France in 2005. In addition to documentary film footage, Les Bosquets features a ballet choreographed by JR and performed by Lil Buck, and music by Hans Zimmer, Pharrell Williams, Woodkid and Ben Wallfisch.

Les Bosquets is the latest installment of twelve years of documentation and close interaction with this community. In 2004, for the exhibition Portrait of a Generation, JR printed oversized portraits of the residents who lived there and pasted them on the housing buildings. After riots erupted in Montfermeil and nearby Clichy-sous-Bois and spread throughout France in 2005, he expanded the pastings to bourgeois neighborhoods in Paris.

In 2014, after creating an installation for the New York City Ballet (NYCB) Art Series, he was invited to choreograph a ballet and created the ballet Les Bosquets, with an original score by Woodkid and special guest dancer Lil Buck.

For the film, JR arranged his team of collaborators beginning with Pharrell Williams. “I had this crazy footage of buildings [in Les Bosquet] falling down and I wanted Pharrell to do the music,” JR explains. Williams agreed, and according to JR, he was fascinated to know more about what happened. “That's how [Williams] put that seed in my head, [that] I should continue the film,” JR says. He enlisted Woodkid, who had composed the score for the NYCB, and then he approached Oscar winning composer Hans Zimmer, who agreed to work on the film under the condition that it exists as an art project.

When JR started photographing the community over a decade ago, he had no idea how the project would evolve over the next decade. “That's the beauty of working as an artist,” JR says. “You decide when it's finished.”

Les Bosquets was built in the 1960s as housing for a diverse immigrant population. Translated as “the groves,” Les Bosquets does not look pastoral, but rather like a broken-down housing project. Located just ten miles from Paris, it remains relatively isolated, with no rail or metro service. By bus, it takes ninety minutes to reach Paris. “Welcome to hell,” Ladj Ly says in the film's behind the scenes footage. “It's the real ghetto,” he adds, describing the broken elevators and burned out lighting inside the dilapidated tower residences.

JR was introduced to Les Bosquets by artist Ladj Ly, who grew up there. The two began photographing the neighborhood, and residents became curious. “People asked me, 'why don't you take us in the photo?'” JR remembers. He pasted the portraits throughout the neighborhood, covering entire stories of buildings. “That was the first time I enlarged photos so big,” he says.

The poignancy of this project lies in the fact that it gave a face to these individuals. Using a wide 28mm lens, he encouraged his subjects to get up close – many of them widen their eyes and make funny faces, resulting in caricatured portraits that are humorous, yet at the same time humanize and demystify individuals who are unseen or marginalized outside of their community. When JR pasted the portraits in Paris, he included on each “the name, the age, and the building number” of each subject. “You could actually go and knock at his door,” JR says.

Today, social media enables anyone with a smart phone to share their own images, but in 2005, there was no Twitter or Instagram for people to broadcast their experiences to the world. The brilliance of Portraits of a Generation lies in the fact that as the media began covered the rioting in Les Bosquets and nearby areas, JR's large-scale pastings appeared in the broadcasts as a visual backdrop and were disseminated throughout the globe. The residents of Les Bosquets were suddenly visible, and the neighborhood received attention as a result. “People came and visited the neighborhood because of the pasted photographs,” JR says. “People came there to see an exhibition of the photos.”

Born in France, JR started as a street artist, photographing his friends holding spray cans and tagging buildings. Today he works between Paris and New York and is represented by Galerie Perrotin,among others. His artistic practice has expanded to include ballet choreography and film, forays which are the result of his own desire “to push the limits,” he says. “I think whenever I feel like I can really fail from something, I'm really learning from whatever happens. Doing a ballet was definitely that kind of experience.”

No matter what he is working on, the nature of JR's work is collaborative and inclusive, providing opportunities for his subjects to be active participants and to tell their own stories. His first film, Women are Heroes from 2008, is the poignant depiction of women suffering from war, oppression and poverty from Delhi to Phnom Penh. In 2011, as a recipient of the TED prize, he launched Inside Out Project, a large-scale participatory artwork that traveled to more than 100 countries and included thousands of people across the globe. The basis of the project enables people to take photographs of themselves, print them for free, and paste them anywhere from busses to buildings. A documentary about this venture, INSIDE OUT: The People's Art Project premiered at TFF in 2013.

For his second appearance at TFF, JR worked with a whole crew of collaborators to produce a visual re-creation of the 2005 riots in France, told through the story of a ballet that he choreographed, and video images and testimony from the neighborhood. The narrative consists of an artist based on Ladj Ly, played by Lil Buck, and a journalist, played by Lauren Lovette, who encounter each other in the form of a ballet sequence.

The making of the film took place in the heart of Les Bosquets, with the remaining housing towers as a backdrop and a cement courtyard as a stage. Set against the stark urban background, we see Lovette, as the journalist, crawling on cement, her knees and the bottoms of her pointe shoes smudged with dirt. A whole crew of dancers from Opéra de Paris reenact the riots, dancing in front of red lights and smoke.

Filming on site and engaging the community are continuations of JR's commitment to involve people in his work and to share his practice. “A lot of the people there had never seen ballet,” JR told me. “The fact that the community let us film it there was an extraordinary experience.” In fact, he was welcomed by the residents, many of whom had gotten to know him over the past decade and had worked to preserve the images from Portrait of a Generation. As graffiti, the pastings are illegal and could be removed by the authorities. But the residents protected the images due to their involvement in the project. “That's why the images stayed there,” JR says. “The people protected them. There is still some trace of it eleven years later.”

Throughout his career, JR has acted as a witness for communities around the globe, and at the same time enables his subjects to tell their own stories. “I always kind of stayed in the shadows,” he says. One cannot ignore a prominent image in Les Bosquets of Ladj Ly brandishing his camera like a weapon. This is the power of JR's art.

Les Bosquets will have its world premiere at Tribeca Film Festival on April 26, 2015. A discussion between JR and Lil Buck will follow the screening.

SEE JR AT TRIBECA TALKS AFTER THE MOVIE: LES BOSQUET