The ‘True Blood’ star dishes on working with TFF 2014 Best Actor winner Paul Schneider and the original ending of ‘Goodbye To All That.’ 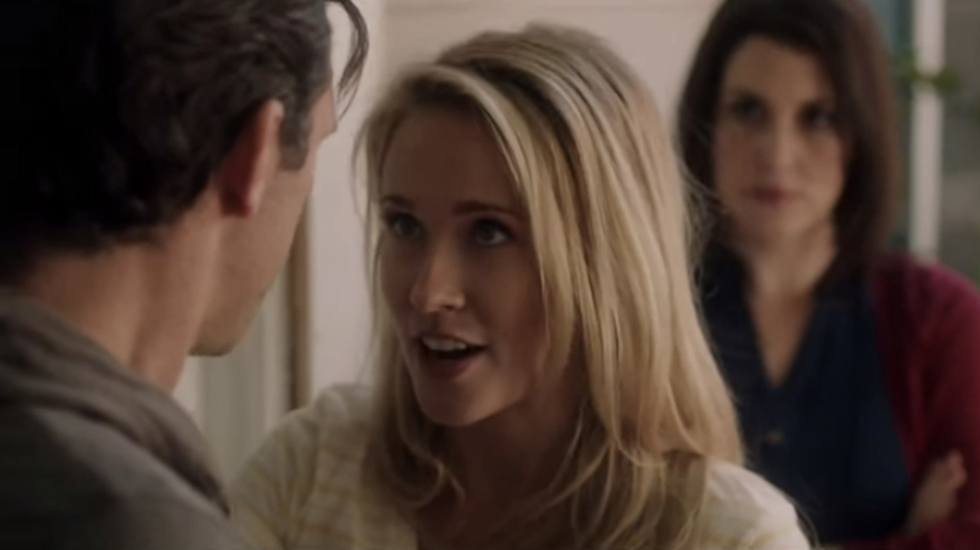 Have you ever had to start over? That’s the dilemma that Otto Wall (indie vet Paul Schneider) faces in Angus MacLachlan’s Goodbye to All That. The film follows Otto, a man who must reevaluate his life when Annie, his wife of over a decade (Melanie Lynskey), suddenly divorces him. Things get complicated when he enters the exciting (and sometimes scary) world of online dating.

This all-star ensemble dramedy co-stars Heather Graham, Ashley Hinshaw, Amy Sedaris, Heather Lawless and the amazingly talented Anna Camp. We spoke to Camp over the phone about her delightfully unhinged character, returning to her alma mater, and what she loves most about working on an independent feature.

Tribeca: Goodbye to All That celebrated its world premiere at the 2014 Tribeca Film Festival. Can you talk about that experience?

Anna Camp: It was actually my first time at the Tribeca Film Festival. We had such a great response from the crowd, which really meant a lot. I remember we were all so excited for the press day after the premiere. It’s amazing how much New York City embraces the Festival. I had a great time.

Tribeca: What’s your favorite thing about working on an independent film like Goodbye to All That?

AC: In my experience, indie movies draw actors who really want to work in that milieu. You don’t do indie projects for the money or the trailers [laughs]. You do an independent movie because you really like the script and the role. When you get a group of actors and filmmakers together with the same vibe, something truly amazing can happen.

There was something so moving about this man trying to get back out in the world. His vulnerability was very interesting to me.

Tribeca: While Otto is the protagonist, it’s really the women in Otto’s life and his relationships with them that dictate the story. Did you realize how feminist this project when you first read the script?

AC: At first glance, I think you don’t think the movie is necessarily feminist. Otto is sleeping with all these different women and enjoying his rite of passage. However, you soon realize that these women want sex as badly as Otto does. There’s nothing wrong with that. There’s a very empowering message in there for women.  Heather Graham’s character, Ashley Hinshaw’s character and the rest know what they want with no strings attached. There’s something empowering about women who don’t need to be in relationships with  guys that aren’t necessarily right for them. These women get what they want out of their brief encounters with Otto and then go about their lives.

Tribeca: What initially drew you to the script?

AC: I have been of fan of Angus MacLachlan since I watched his first movie, Junebug. I loved Amy Adams’ character in that—she was so fantastic. Plus, we are both alumni of the University of North Carolina School of the Arts. Paul Schneider and Celia Weston also went there so it felt like a mini-reunion on set. I read the script and there was something so beautiful and true about one partner being totally blindsided by the end of a marriage. There was something so moving about this man trying to get back out in the world. His vulnerability was very interesting to me.

I loved that scene between Otto and Heather Lawless’s character right after the breakup of his marriage. They were summer camp friends and they reconnect after twenty years. He’s just had this panic attack and calls her to askhow people move on, how they get through such a loss. She tells him, “Take it one day at a time.” That simplicity really resonated with me.

Tribeca: There’s no fanfare in Angus MacLachlan’s storytelling, which I really like. His style is so understated and honest.

AC: I remember crying after reading the first version of the script I was sent. Paul’s character ends up losing his foot from the running injury he sustains at the beginning of the movie.

Tribeca: I wondered about that! I was so relieved that his foot appeared to be healing at the end.

Tribeca: Did something about the character of Debbie Spangler stand out to you?

AC: I thought, “wow, she’s crazy!” [laughs] I definitely think she has some bi-polar tendencies. It’s a small role but Debbie is a really fun, raunchy character. Also, I knew I would get to go to North Carolina and visit Winston-Salem where I went to college.  It was perfect.

Tribeca: What was it like to collaborate with Angus Maclachlan as a filmmaker and fellow alumni?

AC: It was great. We both had a fantastic time being in Winston-Salem, visiting old haunts and eating at restaurants we used to frequent. Angus went through the acting program as well, so he really knows how to speak to actors. I think he eventually switched to the directing program, but he understands how valuable it is for actors and directors to collaborate.  We were very comfortable discussing my character and exploring her motivations together. It felt really special to work with both Angus and Paul. Given our mutual training at UNC, the interaction among the three of us was pretty seamless. We developed a nice camaraderie.

Tribeca: I was so happy when Paul Schneider won the best actor prize at TFF 2014.

AC: Right? He’s such a good actor—so focused and so grounded. I never felt like we were doing something out of reality. While his performance seems measured and well thought out, Paul was so imaginative in the way he approached the role. He has a relaxed, calm energy. Our scenes could have really gone off the deep end, but the fact that Paul was so rooted, kept them within comfortable boundaries.. At the end of the day, the film is about Otto’s journey. If the audience doesn’t buy your protagonist…good luck with your movie [laughs]. Paul provided a wonderful anchor for this film; he did a beautiful job.

Tribeca: One of my favorite scenes in the movie is when Otto and Annie finally have it out on Otto’s front porch. Your character, Debbie, has a great moment during that confrontation. While she’s slightly unhinged for most of the film, she serves as the grounding force for Otto in that scene. She tells him exactly what he needs to hear with such clarity.

AC: I’m glad you think so! That’s a huge scene for Debbie. She’s such an interesting character. There’s a line that Annie directs to Otto during that scene that is so striking.  She tells him that she’s trying to teach their daughter that a woman has a right to be loved and to be seen. In a sense, all of the characters in film just want to be seen, especially Debbie. She wants to be acknowledged so badly that she’s constantly stating her own name and telling everyone who she is.

In the scene you mention, Debbie wants to make sure that Otto knows that she sees him for the kind person that he is. She channels her need for someone to tell her that she is amazing and reassures Otto when he is at his most vulnerable. She transfers that positive energy to him before she leaves.

There’s something empowering about women who don’t need to be in relationships with  guys that aren’t necessarily right for them.

Tribeca: You’re in New York in the midst of rehearsal for a new play at Lincoln Center. Do you find yourself changing your creative process depending on the medium, whether it’s TV, film or the stage?

AC: Absolutely. When I’m in TV land, I have an idea of how I want the scene to go, but I don’t do that much preparation. For True Blood, I would get solidly off-book when I was in the hair and make-up trailer. I never wanted to sound too rehearsed or make the dialogue seem stale coming out of my mouth on set. I prefer to create immediate energy on set with the other actors.  If I had a more substantial role on the series, I think my process might have been different, but it was really a dream to get to play Sarah Newlin.

For plays, you do have that luxury of rehearsal time. I really enjoy delving into each rehearsal and uncovering different layers of my character for each scene. You don’t get that time in television or in film for that matter. Because you have had a chance to do intense preparation, once you get on stage, you can just let yourself take this journey with your character.

Goodbye to All That is currently playing at the IFC Center. Not in NYC? The film is available on-demand as well.