Schumer's leading lady debut is a rowdy mess that casts the comedy queen in a clear and invigorating new light. 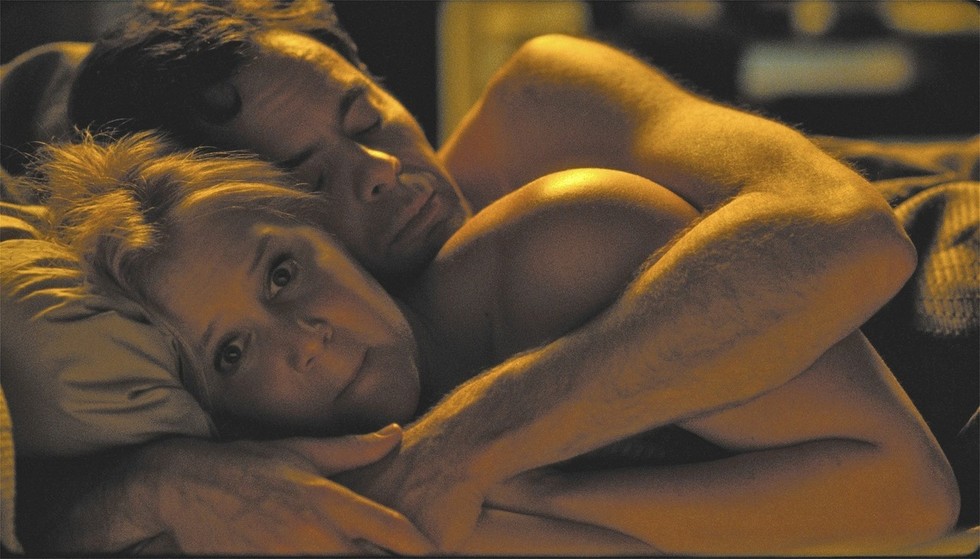 Not since 2008, when Tina Fey managed to lose John McCain the presidency through one uncannily precise and perfectly-timed Saturday Night Live impersonation, has a female comedian dominated the current cultural conversation with more coverage, consistency, and acclaim than Amy Schumer.

Every single article, profile, think-piece, op-ed, and BuzzFeed listicle on Schumer has been apt to point out what a whirlwind year it's been so far for the hard-working, longtime-at-it comedienne, whose ascendancy to the upper echelons of comedy queen superstardom has been paved with all the requisite stepping stones, and then some. There are the bundle of prizes and plaudits from outlets as varied as the Peabodys and Glamour Awards, plus share-heavy acceptance speeches and glossy magazine covers, as well as one divisive, high-profile awards show hosting stint and a recent surge of race-related backlash that was completely inescapable and shakily handled. But there's also the headlining comedy tour, the Chris Rock-helmed comedy special, the awesomely out-of-nowhere Madonna gig, and that no-fucks-giving Bachelorette appearance, not to mention the recently-wrapped third season of Schumer's bold, boisterous, and deeply uproarious Comedy Central series Inside Amy Schumer, which sported trenchant feminist undertones, buzzy celebrity guest appearances, and three viral sketches in its season premiere alone.

This steady, savvily-paced stream of All Things Amy has been leading up to — as if you didn't know — this Friday's Trainwreck, the semi-autobiographical, Judd Apatow directed romantic comedy that marks Schumer's much-hyped debuts as both mainstream screenwriter and studio-approved leading lady. In Trainwreck, Amy Schumer plays Amy Townsend, a thinly-veiled though circumstantially-altered version of herself who writes for a soul-squashing men's magazine by day and, by night, operates as a bed-hopping, barely-there boozehound. This all changes, of course, when Amy is assigned to write a profile on Aaron Conners (Bill Hader, excellent), a kind, levelheaded sports doctor whose good-natured advances force Amy to re-think her adverse stance on romance and monogamy.

From the raucous tone to the slyly sobering gags to the trashy-glorious opening sequence which culminates in a hungover Amy riding an AM ferry back from an aborted Staten Island hookup to the thrum of Miley Cyrus' "Do My Thang," Trainwreck has Schumer scrawled all over it like a dirty message in a filthy barroom toilet stall. Or, so it appears to. It strikes me as curious, at best, and sexist, at worst, that the bulk of Trainwreck's unmissable promotional art (featuring a brownbag-swilling Schumer obscuring Hader) shows not a single sign of Amy Schumer's name. Instead, it's Apatow who top-lines the poster, which alludes to him as merely "The Guy Who Brought You Bridesmaids," a film he actually only produced but which almost certainly remains the filmic touchstone of the latter-day Apatowian empire. This probably makes sense on a marketing level — even though I'm positive that the name "Amy Schumer" is by now exceedingly familiar to most American ticket-buyers — but it also, unfortunately, makes sense on a creative level. Which means that, similar to every Judd Apatow movie, Trainwreck is clever, tender, and shaggily multilayered, but also fundamentally conservative, needlessly overcrowded, and filled with fifteen or so sluggish scenes that could have gladly never seen the light of a projector.

Trainwreck ends up an even split between Schumer's and Apatow's respective visions, which is a shame for those anticipating the salty, hard-hitting subversiveness and cunning comic conceptions of Inside Amy Schumer. That isn't to say that the film is completely devoid of her hallmark iconoclasm. Those who enjoyed watching Schumer send-up entrenched industry misogyny alongside Fey, Patricia Arquette, and Julia Louis-Dreyfus in this season's "Last Fuckable Day" short will be equally entertained by the sight of Schumer taking a sledgehammer to every sentimental memory of that iconic bench shot in Woody Allen's Manhattan. But what begins, impudently so, as a crafty rebuke to rom-com standards and slut-shamers alike ultimately shape-shifts into the much more conventionally familiar reform narrative that's a tad too tried-and-true to feel as progressive as it thinks it is, even if it remains a very personal story for Schumer herself. And yet if Trainwreck ultimately fails to match the remarkable, politically-informed comedic zeniths of Schumer's superb sketch series, it's not for lack of trying on the performer's part. Because in spite of what seem like patent compromises made by Amy Schumer, screenwriter, Trainwreck still frequently impresses by further acquainting us with the radically refreshing transparency of Amy Schumer, actress.

Firstly, it's true that Schumer is a relative newcomer to film acting and could use a bit more polish in this regard. She doesn't appear to be in total control of the variable subtleties, styles, and rhythms of the medium in the same way that a more seasoned pro — such as co-star Tilda Swinton, styled so as to resemble some sort of glamazon Tan Mom in her brief appearances as Amy's imperious boss — surely would be. But what Schumer lacks in experience, she more than makes up for in pluck, personality, and candor. I'm sure there are critics who will imply that these qualities should come naturally to an actress playing a character who is, essentially, a dramatically-heightened version of herself, thus rendering the assignment somehow "simpler" in their eyes. This is an unfair assessment that's bound to diminish and distract from what's really special in Schumer's performance, which seldom feels like a well-known comedienne simply transferring her pre-established star persona (and heaping personal baggage) onto the big screen.

Although the overall character arc and most of the major familial subplots all loosely derive from Schumer's own real-world experiences, Trainwreck is not — surprise! — a biopic. Schumer has played drunks, floozies, and dim-bulbs countless times on Inside Amy Schumer, which is rarely wittier than when it's gleefully satirizing the vacuum-packed vapidity of the young American white woman, but she isn't just risibly reiterating the type of broadly biting ditz caricature that has quickly become her stock-in-trade across the small-screen and stand-up stage. Nor has she ditched her tendency to critique and poke fun at her own characters, which she does often and hilariously enough throughout the film's finer stretches. And yet Schumer's confident onscreen handling of a superficially-similar yet subtly trickier role somehow feels more credible, compassionate, and casually daring than what we've seen her tackle so far. In Trainwreck, Amy Schumer deepens the ditz.

You can see it in the film's best scene, which happens to be its most winningly straightforward on both the writing and performing fronts: the abrupt arrangement of Amy and Aaron's first night together, initiated, without hesitation, by the former. After departing a midtown bar during last call on an unofficial first date, the two crawl into the back of a cab. He tells the cabbie they'll be making two stops. She tells the driver they'll only be making one. Aaron tries to correct the direction, but Schumer insists it's only one: his place. In a wordless, sexy, yet crisply simple two-shot, Schumer sits beside a hilariously befuddled Hader, a look of undaunted but totally deadpan arousal on her face. She has done this before and she knows what's coming next. There's no shame, no second-guessing: just serene and silent self-assurance, pristinely performed by Schumer.

Schumer cuts an appealingly relaxed figure during silent scenes like this, leaving no room between actress and character in a way that feels almost bracingly direct. She conjures an admirable amount of openness for a character so fairly guarded, but I also love the varied ways in which she allows Amy to all but woozily self-vanish in expression and comportment during numerous scenes, either out of drunken boredom (as in an embarrassing, relationship-ending movie theater fight with John Cena's muscle-bound ex-boyfriend) or general workplace timidity, so as to evoke an Amy who is both frequently insouciant and uncomfortably out of her depth. Long before the script bluntly explicates that Amy Has a Problem in its final act, Schumer allows us to intuit through the suggestive, understated clarity of her playing that Amy's party-hard ways might, yes, be a problem, but so too are her own self-undermining tendencies, especially when it comes to Hader's Aaron.

Schumer and Hader have chemistry for days, and Schumer's often at her best opposite the SNL vet and his goofy offbeat charm, selling the romance but never letting her on-screen avatar get too comfy or complacent with this newfound Prince Charming. Schumer can toss off one witheringly incredulous double take at Hader and clearly communicate why such a sweet, sensible, if slightly vanilla catch might be too mediocre a love match in the eyes of someone so slovenly and stubbornly independent-minded. A good deal of this is done physically, without the aid of any zingers, even though, unsurprisingly, Schumer is an ace with her own dry wisecracks, which include a late, great jab at Hader that comes at the expense of Anne Hathaway's Oscar and one hysterically unprintable punchline about contraception removal. Her tart, rubber-band line deliveries often sound like Bette Midler's indecently jolting one-liners spoken with the fuzzy-mouthed bubble-headedness of peak Goldie Hawn. Schumer's still-shaping acting style contains both Hawn's lightness of touch and Midler's brassy verve, a combination that feels uniquely asymmetrical and invigoratingly modern.

It's tempting to say that Schumer finds a real human being within a debauched hot mess, however fleetingly. But Schumer's a shrewd and self-aware enough performer to make the debauched hot mess herself feel recognizably real, without sanctifying her as some dirty diamond in the rough. Amy Townsend wobbles into Trainwreck a normal enough "bad girl" who seems at ease in her fast, natural state without explanation or apology — that is, until the strains of romantic reconciliation and reactionary third-act moralization demand them.

Trainwreck is rarely as novel or as enlivening as the ambitious acting efforts of its laudable leading lady, although I do wonder if subsequent viewings might potentially unearth a fuller, more forward-thinking, and less deceptively disheveled film, in the same way that many sketches from Inside Amy Schumer only get funnier, friskier, and meatier on the second, third, or thirtieth watch. Yes, the film's a mess, but it's the sort of mess that can only hail from the game and eager willingness of its prime mastermind to play around with her image, experiment with interesting if erratic collaborators, and try something new. One can only hope it's a harbinger of bolder, bawdier, and less compromised big screen opportunities to come for Schumer, who has already helped usher in a strangely thoughtful and audaciously corrective new comedy culture for both female performers and their audiences. Schumer certainly seems interested in growing and getting better, even as she continually insists that she probably won't make for "a very good movie star." Trainwreck is no cinematic triumph, but it's pleasing at least to watch Schumer prove herself wrong.