Aaron Koblin and Chris Milk on This Exquisite Forest 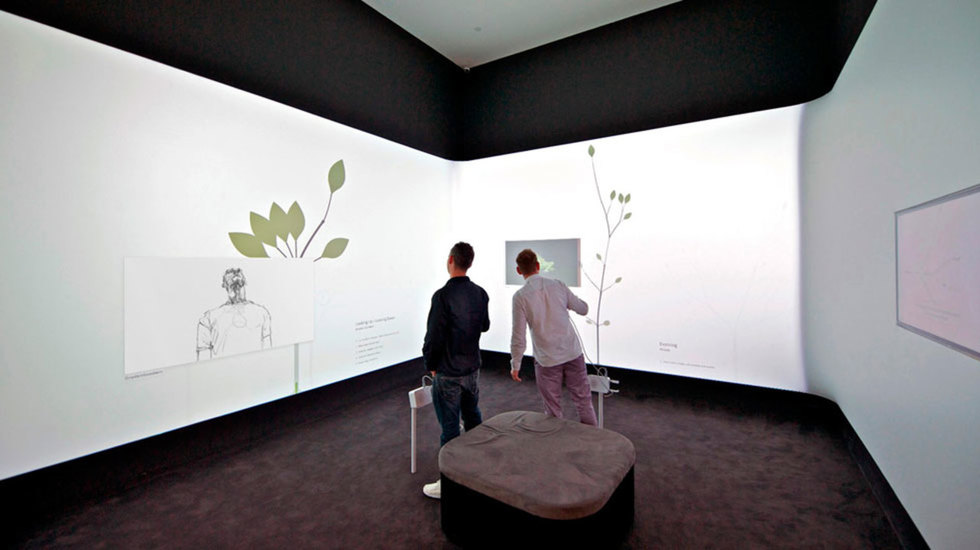 Our inaugural Storyscapes program, created in collaboration with Bombay Sapphire®, celebrates new trends in digital media and the filmmakers and content creators themselves who employ an interactive, web-based or cross-platform approach to story creation. We spoke to Aaron Koblin and Chris Milk about This Exquisite Forest, which allows visitors to create short animations and build on others’ work directly in their web browser, creating a collection of navigable, branching narratives resembling trees that grow bigger as more artists contribute.

Tribeca: Your first endeavor into the world of collaborative art was the Johnny Cash Project, which was a crowd-sourced music video for Cash’s final song, “Ain’t No Grave.” What lessons did you take from that experience that helped you to improve upon This Exquisite Forest?

Aaron Koblin and Chris Milk: The Johnny Cash Project constrained artists to only one drawing based on a still image, whereas This Exquisite Forest opens the doors, creatively, allowing users to create short animations on a blank canvas. The biggest difference, though, is that the collaborators dictate the story itself. When we saw what people were doing with the Johnny Cash Project we knew that they wanted to push the boundaries of the story itself. Exquisite Forest is really a big experiment - we wanted to see what would happen when pushed back the restrictions. The project is really about testing limits and seeing what naturally evolves through this unique form of visual dialog. As expected, this openness has been both positive and negative, as it gives so much freedom to the artists. It’s been fascinating to watch the site evolve.

Tribeca: Chris and Aaron, can you discuss the challenges you encountered while creating This Exquisite Forest? What was your collaborative process like?

AK and CM: The biggest challenge is pushing the limits of technology just to the point where you get the most out of it creatively, without causing it to break. This is a struggle on every project, but it is so rewarding when you find that line and go right up next to it.

As far as our collaborative process, we’re very fortunate in that we work well when we’re in the same room and when we’re just communicating over e-mail and video chat. It’s a constant back-and-forth of ideas. We’re also not afraid to hold off big decisions... we’d rather explore all the angles first and prototype, prototype, prototype. We were really fortunate to have an amazing team putting this thing together and exploring with us.

Tribeca: How many team members worked on This Exquisite Forest? How did you utilize the Chrome browser to make your joint visual come to life?

AK and CM: We had a core team of five or six programmers and designers working on the website, plus help from external partners on the music engine and the physical installation at the Tate Modern. Google Chrome’s support for technologies, like HTML5 video and audio, was crucial for letting us build the site entirely for the web, rather than making it a piece of software that people would have to download and install.

Tribeca: It’s well known that This Exquisite Forest was featured as an interactive installation at the Tate Modern and that the museum helped support the project from its conception. What was your planning process like? Can you describe the gallery space at the Tate?

AK and CM: Jane Burton at the Tate Modern saw our work on the Johnny Cash Project and approached us about working together on a new piece that explored similar concepts of collaborative creativity. She worked with us closely on the installation design and room selection.

The installation is on the 3rd floor of the museum and is in two sections. The first is an interactive exhibit space where visitors may use custom-built infra-red wands to browse floor-to-ceiling projections of animation trees seeded by well known contemporary artists, including Miroslaw Balka, Olafur Eliasson, Dryden Goodwin, Raqib Shaw, Julian Opie, Mark Titchner, and Bill Woodrow. The second section is in the public space in between galleries, which contains five digital Wacom drawing stations where visitors may contribute submissions to the project by drawing directly onto the screen using digital pens.

AK and CM: The playlist is algorithmically created. It's based on the popularity of each animation, including the number of submissions and the number of “favorites” it’s received.  We then mix in a short list of our favorite animations that we’ve hand-selected.

Tribeca: What would be your advice to those who are tempted but perhaps intimidated to participate in This Exquisite Forest?

AK and CM: If the first tree you’re looking at seems intimidating, keep looking for something simpler. Some of the easiest ones have proved the most fun, such as “The Line” in which the artist is asked to trace a single line on each frame. Another called “Counting” asks you only to draw one number per frame, enumerating by one as you go. The challenge is figuring out how to be creative without breaking the core concept of the tree. The platform isn't meant to be only for amazing animators, but for anyone with a creative itch--whether visual, audible, poetic, playful, or other.

AK and CM: The Internet. When we work together, it’s our artistic medium. We haven’t done anything with 3D printing yet, but it’s something we talk about frequently. That technology is probably very close to becoming world-changing.

AK and CM: Stories well told. There’s nothing better, and Tribeca has lots of them.

AK and CM: Ignoring boundaries and breaking expectations. Combination is the essence of creativity, and experimenting with the potential of new technologies is the key to creating new experiences and art forms.

From April 19 - April 21, This Exquisite Forest, along with our other four Storyscapes selections, will be featured in a public, interactive installation at the Bombay Sapphire® House of Imagination (121 Varick Street, 7th Floor). Just don't forget to RSVP!