We visited the studios of a few artists who have contributed their work for the Artist Awards program - the latest: Jean Pagliuso and her chickens. 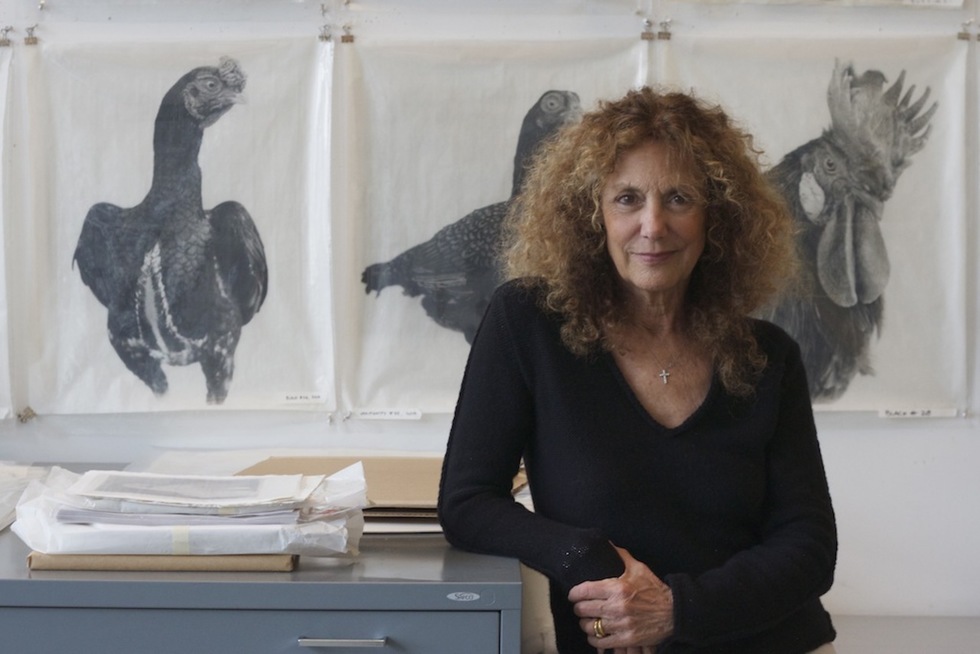 "Most of my early photographs were on assignment, with Anna Wintour or New York Magazine, in LA or Little Italy. Then I worked with Robert Altman for 8 years. I got him right before the high point before his career which is ok with me, I loved it. I worked on Thieves Like Us, 3 Women, Buffalo Bill and the Indians, Nashville, Popeye. I was assigned to capture the essence of the characters within the film as their character, and the photos were then used for promotional material. For 3 Women, I roomed with Shelley Duvall, who kept a diary in character. I asked her if I could use it - an idea lifted from a photographer who used to do this. I wrote the thoughts that were compatible - but not with the images I was shooting. So that’s what ended up in the poster, it looked like her writing. Altman was a big boost, then I did promotional photos for films."

"After that I worked for House & Garden, and a lot of other magazines. Then I had my daughter, pretty late, and didn’t want to travel so much. So I started pulling away from that and trying to do some different work. I started working on rice paper and figured out a way to print on it and traveled all over the world. Right now I have an ongoing show of photographs of chickens. My dad raised chickens and taught me how to raise chickens, which were shown in the Pomona State Fair. When he died, I thought, what if I could use the printing technique I had developed for landscape - but for chickens? It had been my background, so I kept on with this kind of photographic process."

"My dad only raised one kind of chicken - I have a picture of it. I get the chickens from this agency that specializes in animals for fashion photography. I went to a farm to try to get some really unusual chickens, but that didn’t really work, they were flying all over the place. But these guys just stand here.

"These are printed with gelatin silver, similar to the process I used to print my landscape photography. I’ve been working with this method since 1994, when I traveled to Angkor Wat in Cambodia for my Fragile Remains project. In the 60s, I was just kind of hanging around LA and bought a rubbing from a temple - people would do that when they traveled there, do a rubbing with charcoal or lead and be left with this image on really thin paper. And I thought if I could capture that kind of image, I’d feel pretty good."

"There were these giant trees that were all over the place - they’re going to take all those trees away. But these trees are what make Angkor Wat completely beautiful. These roots go as high the temple windows, but the tree soars much higher than that still. I’m surprised that these trees haven’t collapsed the whole temple anyway, so I love these. But when it comes to selling things in galleries - people prefer my chickens. I think landscape seems to be an old-fashioned thing."

"After Cambodia, I went to Pushkar in Rajasthan, India. I photographed this bath where the local go in the morning and wash - in this particular one, someone had just clapped during their prayer and all the pigeons that had been sitting on the walls around the bath took off at once. With the rice paper printing, I dug myself into a very big hole. The emulsion, which I buy from England, has to be melted so it goes into this double-boiler and then I coat three pieces at a time, and then print on it. It’s a very delicate process because the emulsion sometimes leaks right through the paper. It’s a long process and I make a lot of mistakes - I’ve been having a lot of problems with the delicacy of rice paper. It’s made from the bark of a Mulberry tree, it isn’t really rice, but the papers I’ve been using have become thinner and don’t react the same, so I’m constantly testing new papers."

"I also love all the prints I made from photographs of Santa Fe. They’re not on rice paper, but I just love them. I found this camera from an old family vacation that didn’t work, so all of the photos are warped. And then this photo of Belushi - my best friend married Lorne Michaels and we all stayed in this big summer house together: Belushi, Danny Ackroyd, and Chevy Chase. This photo was so strange because I had woken up to get coffee and saw Belushi there with a cat in his mouth, reading the New York Times. I was never without my camera at that point - I can’t believe my luck, that I caught a moment like this. They’ve had incredibly runs, and really interesting people, but I don’t think anything was ever as cohesive as those first couple of years because every one of those people became very famous. I felt really privileged to be around that."

You can see more of Jean Pagliuso's work on exhibition at the Mary Ryan Gallery through May 9th or the piece we have on view at Spring Studios through April 26th.