Barney's latest, 'River of Fundament,' is playing at BAM through this weekend before heading around the world. It's as grotesque, befuddling and spectacular as the last. It's over 5 hours long. Get limber. 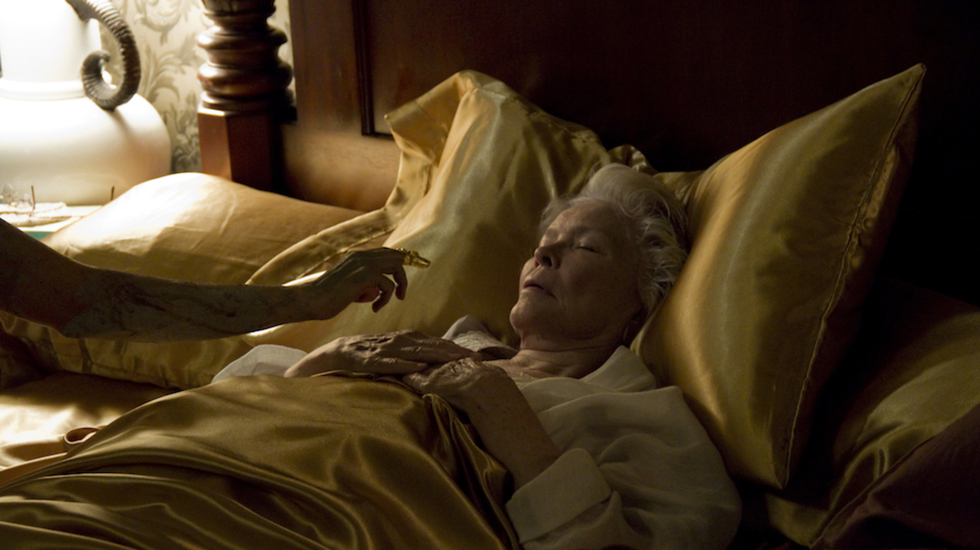 Matthew Barney’s films divide and unite critics and the general public alike. Merging performance, sculpture and the indescribable onto the big screen, Barney’s films are epic and definitely not linear. Is it art, or is it cinema? Who knows!

“It is one of the most imaginative and brilliant achievements in the history of avant-garde cinema,” wrote The Guardian’s critic Jonathon Jones of the Cremaster Cycle, Barney’s 2002 manic, bestial, opulent, sweeping, majestic, grotesque film series based on Norman Mailer’s The Executioner’s Song. “Cinema and Art have circled each other, squared up to each other, over the years, but only occasionally come together, as here, convincingly.”

Now, Barney’s next marathon film, River of Fundament is playing at BAM through this weekend before heading all over the world, all 5.5 hours of it. Fundament is seven years in the making, and Barney composed cinema from raw and elaborate live performances that morphed into something more like rituals or séances involving cast and audiences (along with football jerseys, molten iron, rotting industrial objects and the scooped out carcass of a cow) than the opera Barney first conceived the project as.

The film is loosely based on Norman Mailer’s 1983 novel Ancient Evenings. Themes of reincarnation and Egyptian mythology (and excrement) bounce and tangle like laundry around the stormy clothesline of the operatic, meditative, sometimes overbearing soundtrack composed by Jonathan Bepler from the site-specific performances of Native American chanters, barbershop quartets, opera singers, violinists and...crowds of extras.

Aimee Mullins is, once again Barney’s leading lady. Maggie Gyllenhaal, Paul Giamatti, Ellyn Burstyn, Elaine Stritch and Jonathan Buffalo Mailer, a son of Norman, also star. So does Salman Rushdie. Sitting through it is a feat, but a worthy one.

Film, installation, musical spectacle: the process is intriguing and groundbreaking. But don't take my word for it - here, Barney, his cast and critics tell provocative anecdotes that give us some idea of what it’s like in the mind and on set of “The art world Houdini of visual spectacle.":

Someone asked me if I wanted tiger balm up my nose. I said no. Then we walk into the studio and there’s this decaying pig and maggots in the food. It smelled so bad I thought I was going to pass out. Then we start doing the scene. There are these women singing, and the camera is going around the table, and Matthew comes in and says, “Can you guys be a little more natural?”—Maggie Gyllenhaal

"One kept trying to crawl up my sleeve. I went into a zone—probably one of the most meditative states I’ve been in in my life. … Physical endurance is part of it. Even when you’re watching the film. It’s almost six hours. It requires something of the viewer that is athletic. It’s so unusual in our culture today. But that length also allows you to check out, from your phone, from your e-mail. To say, “I’m going to be with this experience.” – Aimee Mullins on acting with snakes for River of Fundament (Vogue)

"The physical intensity was something. But as extreme as it is, once you become acquainted with the language of the worlds he creates, it’s logical. I’ve had fifteen years of experience with Matthew so this was par for the course for me but for Maggie [Gyllenhaal] and Paul [Giamatti] this was new. Maggie was in a scene in which there was this sex act happening right in front of her and when she heard “cut” she turned to me with her huge, blue eyes wild and said, “Holy . . . I’m in a Matthew Barney film.” – Aimee Mullins on the set of The River of Fundament (Vogue)

"At first it seemed unlikely we would use a real cow. But then it was. And I thought, Wow, I’m really going to do this. Matthew said he wouldn’t ask me to do anything that he wouldn’t. And then he did it. So I had to. It was extraordinarily peaceful inside the cow."—John Buffalo Mailer on playing one of three incarnations of Mailer in the River of Fundament (T Magazine)

“Everything changed when I got involved in sports. Because that’s a situation where there’s a frame around the world and that world has everything – violence, victory, loss. That was the beginnings of what has become an aesthetic system that’s very similar: anything can happen within the frame. It’s what’s outside the frame that’s scary.” --Barney on football and cinema (The Telegraph)

I thought I was going to have beautiful makeup and maybe a prosthetic. I’m supposed to have birthed “Norman II,” so I had a big scar down my belly, but aside from that I have no makeup. All these other actors were in the dressing room getting penises with ribbons around them, and I had nothing. (Maggie Gyllenhaal who…births the second incarnation of Mailer (T Magazine)

A scene around a table was chaotic as all get out. Matthew kept the dead carcass of a pig in there for weeks. The stench of death and decay was overwhelming.—Stephen Payne on playing Usermare in River of Fundament

For some of the live scenes there were ten or twelve cameras rolling—from hotheads in different positions that were controlled remotely. Trying to make the camera position invisible to the live audience is a very difficult way to make a film. You often feel that the camera is not in the position you want it to be in, and you can’t adjust and move the camera the way that you would do on set. — Barney (Bomb)

Barney's Cremaster Cycle also tries to find pattern in chaos, to give us back some of the imaginative sustenance of myth and symbol. Where Coppola and Scorsese found a deep well of myth and ritual in Italian Catholicism, Barney - who belongs to a generation cut off by mass media, irony and time from cultural tradition - has pieced together his own mythology, his own rituals, his own history, from assorted fragments. --critic Jonathan Jones (The Guardian)