What happens when a 19th century bodyguard is sent 150 years into the future to help with an indie film’s marketing campaign? He holsters his gun and sits down at the keyboard: meet Ward Hill Lamon. 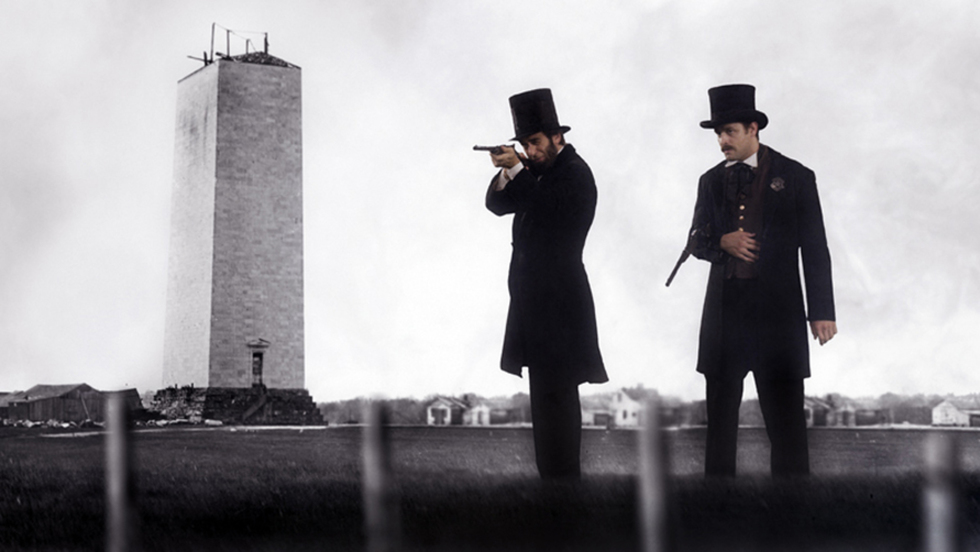 Today’s social media tools offer free and easy ways to build advance awareness about a movie, key for any indie film with a limited budget. The indie film Saving Lincoln, directed by Salvador Litvak and scheduled for release this fall, might be up against Spielberg’s big-budget epic in the battle for mind share among moviegoers, but it has two key elements in its favor:

1. Its focus on Ward Hill Lamon, an oft-neglected historical figure who was Lincoln’s friend and legal partner in Illinois and played a major role in keeping the President alive during the Civil War as his personal bodyguard.

Because the movie can’t cover all the events in Lamon’s colorful life, Twitter has played a key role in adding dimensions to the character in ways that weren’t possible in the past, when an expensive website was typically the only avenue for leveraging the Internet to market a film.

Websites also require your audience to come to you, whereas you can use social media to go to your audience and keep them interested in your project. Considering our Twitter account for the film now has over 9,000 followers before the film is even slated for theatrical release, we believe we have found our audience with social media.

The film’s digital marketing consultant, Blaine Graboyes, who had collaborated with producer Reuben Lim on prior interactive projects, was optimistic about the storytelling potential of using Twitter as an extension of one of the film's characters. Together with the filmmakers, we brainstormed some story ideas around Twitter, hitting on the concept of having Lamon tweet stories about his time with Lincoln as if he had arisen from the dead in the modern day and been placed in front of a computer.

While Twitter is full of people trying to bring attention to themselves through over-the-top commentary, we decided the @savinglincoln account would stay true to the spirit of the film, a period drama. Lamon speaks the way he does in the movie and in his own writings from the Civil War era. We’ve found that Lamon’s followers appreciate our adherence to a specific tone and style.

We structured the narratives like serialized comic strips, with each series of tweets—4 to 8 daily—forming a story beat. Stories begin on Mondays and end on Fridays; if a tale spans multiple weeks, we try to work in cliffhangers where possible. The tweets begin at the same time each day, so there’s a rhythm to the storytelling. Using HootSuite to stage the tweets, we start at 9:00 am Eastern time each day and space them five minutes apart in an effort to avoid the appearance of spam.

The campaign started with some simple stories about Lamon’s upbringing and his first encounter with Lincoln, which occurred in a bar where the aspiring lawyer strolled in for a drink and found the future President telling stories and jokes. We waited until we had a larger audience before getting into the more interesting tales, to increase our likelihood of retweets and feedback from followers. Eventually, we began delving into meatier stories, including Lamon’s attempts to manipulate the 1860 Republican Presidential nomination in Lincoln’s favor.

Lamon occasionally makes “observational tweets,” where he comments on current events (he felt that pistols at 20 paces would be a good way to narrow down the Republican Presidential primary field) or sends out links to interesting news articles. Many of those are good fodder for retweets, since they’re nice one-off comments, but we’ve found that many of the story tweets gain traction too, particularly when they relate dramatic moments.

Lamon also replies to followers—after the day’s story tweets have gone out, so there’s no mingling of the two in the Twitter stream. We have several “super fans” who have taken an active interest in the account; we banter both publicly and via direct message. As many of them have commented on current political events, Lamon’s responses are framed in the way he believes Lincoln would have looked at them. For example, Lamon will say that Lincoln would want both major political parties to work together for the good of the country. (Refusing to take sides in political discussions is important in retaining followers with a wide variety of beliefs.)

So our followers don’t feel bombarded by advertising, we do not mention the movie unless asked. The goal is to build a subtle awareness, so that when more active marketing and advertising campaigns kick in through other channels, we have an audience who already knows who Lamon is. Many followers have commented they are now intrigued about Lamon because of the stories.

Application to Any Genre

Handling social media tools wisely is key, so you generate awareness without turning people off. While it’s tempting to use Twitter as an advertising stream, we’ve found it’s better to simply employ the tool to expand the movie’s characters and story world. Doing so naturally piques interest in your project and makes people more receptive to later advertising and marketing campaigns. If you properly time Twitter use with your other efforts, you can ramp up interest over time and drive people to the theater when the movie arrives.

The Saving Lincoln campaign is just one example of the potential of using Twitter to engage an audience around an independent film. Even if your film isn’t a historical drama, you can still use Twitter to build a following in a similar manner. The key is to use it to tell ancillary stories that tie into your main narrative thread and widen the scope of the story world without giving away key plot points in the movie.

For example, you could use Twitter to create a prequel to your movie and have characters relate the events that led to the story. A character in a rom-com could tell the tale of a series of bad dates, while a character in an espionage thriller could talk about past missions. You could frame it as the character sitting down and reminiscing, or you could present it as a real-time flow, with a character tweeting about his or her daily life.

There are many ways to get creative and use Twitter as more than just a vehicle to tell people over and over again that your movie is on the way. While it was more work to use the approach we did, we are confident it will pay off, because we know thousands of followers have enjoyed reading Lamon’s stories, and are likely eager to see Saving Lincoln.