Celebrate Digital Storytelling at TFI INTERACTIVE at the 2013 Festival

Join us on April 20 for the second annual TFI Interactive Day, featuring leaders from across media, technology and gaming who embrace the new tools and trends in digital storytelling. 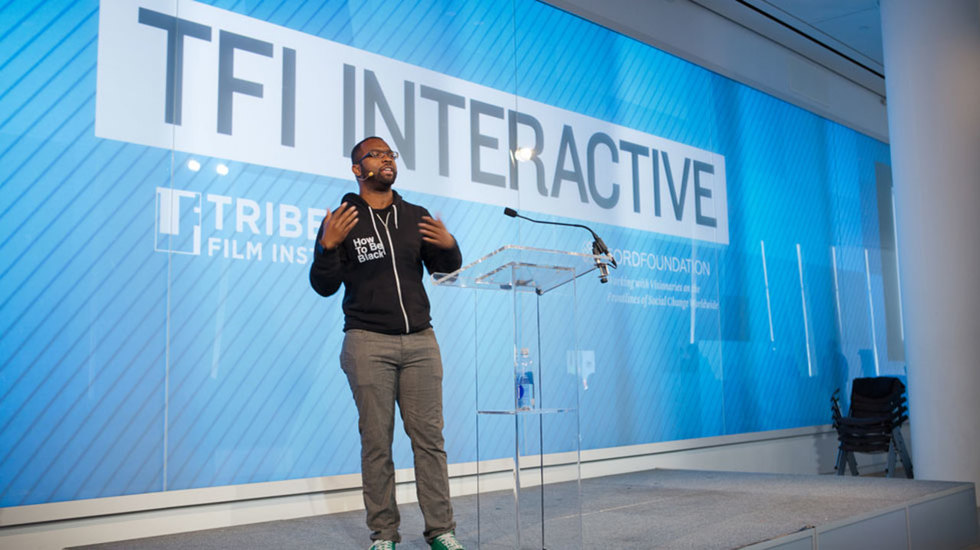 The Tribeca Film Institute (TFI) is happy to announce the line-up for the second annual TFI INTERACTIVE conference, which will feature presentations and keynote speeches from  filmmaker and Webby Awards founder Tiffany Shlain and from representatives of the National Film Board of Canada, Zeega and Kickstarter. Made possible through support from the Ford Foundation, TFI INTERACTIVE assembles the brightest thinkers and innovators from all types of media to explore storytelling in the digital age.

Through a full day of panels and presentations on Saturday, April 20, TFI INTERACTIVE participants will share their insights and knowledge with TFF attendees. Their goal is to inspire content creators to shake things up, and they will be exploring the digital media ecosystem and the tools and trends that are changing the art of business and film. Conversations will range from the ways that rich narratives are created in adventure games, led by Kill Screen co-founder Jamin Warren, to a look at the reasons that telling stories is a vital component of a vibrant society.

TFI INTERACTIVE joins a variety of other TFF and TFI initiatives that bridge filmmaking and technology.  These include TFF’s Storyscapes – a juried, multi-platform transmedia section created in collaboration with BOMBAY SAPPHIRE® that will launch at the 2013 Festival – and the annual Tribeca Disruptive Innovation Awards. TFI regulars also enjoy year-round programming in this vein such as the Future of Film discussion series, Tribeca Hacks, a nationwide series of workshops that brings together content creators with technology experts, and the Tribeca Online Festival. In addition, the TFI New Media Fund, in partnership with the Ford Foundation, provides funding and support to non-fiction media projects that integrate film with social commentary across media platforms.

This year’s TFI INTERACTIVE will take place on Saturday, April 20, from 9:30 am – 5pm at the IAC Building and is open to all TFF badge holders and invited guests. Continue the conversation online with share comments and insights by using the Twitter hashtag #TFII.

Tiffany Shlain, filmmaker and founder of the Webby Awards

Tiffany Shlain, filmmaker, founder of The Webby Awards and recipient of 50 awards including one of Tribeca’s Disruptive Innovation Awards will present a Live “Cloud Filmmaking Manifesto” where she will describe her new participatory way of making films collaboratively with people all over the world.  She has released 3 of these films to date, customized for free for nearly 500 nonprofits worldwide (part of the Cloud Filmmaking concept), and the last one, Brain Power: From Neurons to Networks, was just selected by the US State Department as one of the films to represent America in the 2013-14 American Film Showcase. In this keynote she will share how she makes these films as well as premiere a new short film on Cloud Filmmaking.

Wish For The Future is a creative platform to empower everyone to shape the world around them and create a better future now. Lance Weiler is known as an interactive media trailblazer and for TFI Interactive will be taking the digital into physical throughout the event with the help of the audience.

11:00AM: PANEL: ARE ADVENTURE GAMES THE NEW TELEVISION?

Think you know everything about narrative? When it comes to gaming you may be surprised. Adventure games are maturing and increasingly seen as a perfect narrative complement to the rich storytelling found on television. Jamin Warren of Kill Screen talks with panelists about the future of gaming and the evolution of narrative.

Loc Dao, head of digital content and strategy for English Programming at the National Film Board of Canada

Loc Dao will take attendees through the projects NFB Interactive has been working on since the smash hit Bear 71. They are about to do it again with Circa 1948 by Stan Douglas, a 3D historical augmented reality app that captures the stories and architecture of a transitional post-war era Canada. Get a sneak peak of this exciting project by a world-renowned artist.

Called a "Timothy Leary for the Viral Video Age", Jason Silva is known as an innovator and disruptor.  He definitely breaks the traditional media mould with his wide-ranging curiosity and infectious enthusiasm. His non commercial short films have been seen millions of times online and Jason has spoken at TEDGlobal and keynoted events for IBM, INTEL, Microsoft and SXSW.. In this 20 minute inspirational talk he will touch upon some of the highlights of his past work, the pace of technological disruption, and reflect on why telling stories is so important to us. Jason can be seen this April as the host of National Geographic Channel's new series Brain Games.

Localore, an independent producer-driven public media production from AIR, Inc, has birthed a set of inspiring transmedia projects that open our imaginations to the new possibilities of “full spectrum storytelling.” Some of the most meaningful and powerful projects happen on our doorsteps. Discover ten of them.

Zeega has quickly enabled film makers across the world to create non-linear, online stories without the need for a degree in computer programming. In this 10-minute presentation, Jesse Shapins will lay out a collaborative manifesto for web-documentary.

2:10PM: PAST, PRESENT AND FUTURE OF INTERACTIVE DOCUMENTARY

In 2008 most of our attentions were turned to the impending doom of Wall Street. Caspar, however, was out creating the IDFA DocLab and setting forth on a journey that would lead the way for the exhibition of interactive documentary. Caspar will look at the past, present and the future of this work with an unusually broad base of experience to draw from.

Deanna Zandt, media technologist and author of Share This! How You Will Change the World with Social Networking, will show how social change movements take root through collaborative media and how to harness the power of social.

Developed during a P.O.V. hackathon this seasonal and episodic online documentary is the companion piece to Aatsinki: The Arctic Cowboys (screening during the Festival). This experiential project lives alongside and supports the feature length documentary.

Stephanie Pereira is a self-confessed make-it-happen kind of person who will explore how the Kickstarter crowd funding platform can be used as a storytelling tool – it's about the audience as much as it is the money.

Maker culture is more than knowing how to code, it is about a state of mind - if you can think it you can probably make it. The theory isn't that far removed from that moment where you get the idea for a film, the only difference is the next step. This panel explores rapid prototyping and getting your hands dirty to get something made and into the hands of your audience as quickly as possible.

WelcomeTable is a multiplatform project including a visual/auditory installation featuring large-scale photography, video portraits and live data to reveal the people behind the kitchen doors in restaurants across America. Joslyn Barnes will take us through all the elements of the project that shows that eating local is only half the battle.

CLOUDS includes interviews with 30 new media artists, curators, designers, and critics, using a super-exciting new 3D cinema format called RGBD which uses a Kinect to create a videogame-like film environment. The creators of CLOUDS will take about the possibilities for creative code and creative filmmaking using their open-source RGBD Toolkit.

Storyscapes is a new section at the Tribeca Film Festival in 2013, in collaboration with Bombay Sapphire, celebrating interactive transmedia projects across genres. The creators will talk about their projects and describe the process of bringing work from the web to an immersive, installation space at a film festival.

Orlando Bagwell, director of the JustFilms initiative at Ford Foundation