Home » Tribeca News » From Brooklyn To Russia With Love: John Forté on "The Russian Winter"
View All News

From Brooklyn To Russia With Love: John Forté on "The Russian Winter"

From his early days in Brooklyn to his prison term in Texas to the bitter cold of Moscow, musician John Forté takes audiences on a physical and spiritual journey in “The Russian Winter”. Now available on digital platforms everywhere. 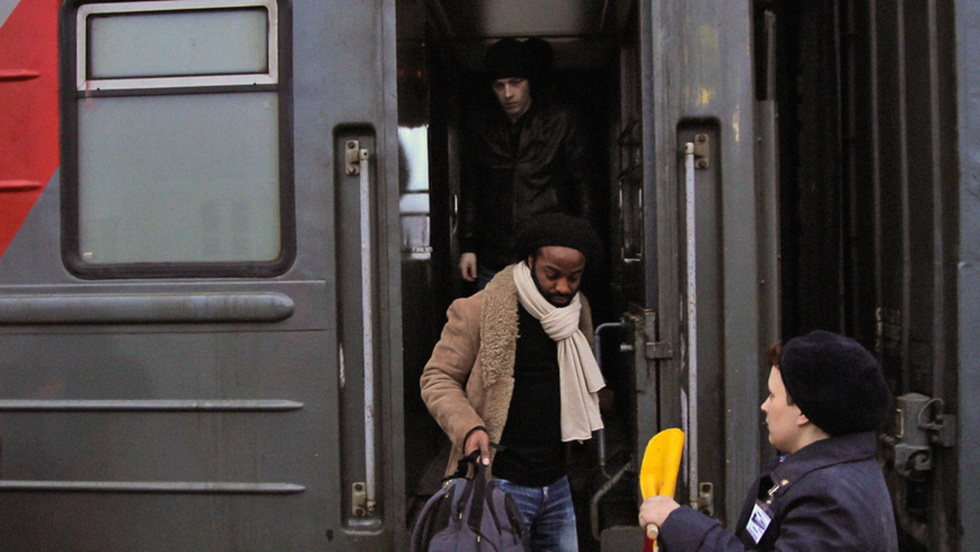 Note: This interview was originally published as part of our coverage of the 2012 Tribeca Film Festival. The Russian Winter is now available on iTunes, Amazon Instant Video, Movies On Demand, Cinemanow, Playstation, Vudu, XBOX, and YouTube Rentals.

Tribeca: As the subject and executive producer of The Russian Winter, how do you describe the film in your own words?

John FortÉ: The Russian Winter documents our 9-week tour through Moscow, Russia and beyond. Our primary mission was not only to share our own music, but also to collaborate with Russian artists. We wanted to immerse ourselves in the culture and to learn how people on the other side of the world view their lives. We were privileged enough to be able to donate all the proceeds to local charities and other organizations, including The Happy Hearts Fund. We didn’t just issue checks; we showed up and visited these orphanages and hospitals to share our music.

TRIBECA: How did The Russian Winter come to fruition?

JOHN FORTÉ: It originally started as a plan for a weekend trip, but Russia seemed like a long way to go for just a few days. So we made some phone calls, got the ball rolling, and our journey turned into a 9-week charitable tour. The trip was long and the climate was cold [laughs], but the experience was really worth it. Once we realized the magnitude of what we were undertaking, I said to my now business partner and old friend from high school, “We should document everything.” Even though we had no guarantee of how our journey would come out in the end, we knew it was important enough to be recorded and shared. Fortunately, we produced a film that is pretty substantive and entertaining as well.

TRIBECA: One of the recurring themes in The Russian Winter is that of journeys, both physical and spiritual. What do you want audiences to take away from your film?

JOHN FORTÉ: I think I want the audiences to take away authenticity. I strive to achieve that with all of my art, whether it’s music or photography. I want my audience to know that, first and foremost, I did not make this film for an audience. I did it for me as a way of sharing my ideals and allowing the artist in me to be vulnerable enough to be exposed. This documentary comes from a very genuine place. Irrespective of moral messages or those sorts of take-aways, I want people to feel that they are witnessing something that really happened.

TRIBECA: Had you been to Russia before?

JOHN FORTÉ: Absolutely not. For kids from Brooklyn growing up in the 70s and 80s, Russia was as far away from our thinking as Mars. We didn’t dare dream of going to places like Russia, especially at the end of the so-called Cold War. So being able to get on the ground over there to connect with that history was something else. During our trip, we immersed ourselves completely in the Russian culture.

TRIBECA: It was really incredible to watch you vibe with Russian musicians like Alina Orlova and Sunsay. Despite the language barrier, you still managed to connect through the music. Can you talk about that creative process?

JOHN FORTÉ: The creative process is intuitive and transcends language. We composed a song together on a Friday night and decided to shoot a music video the next morning with Sunsay on the fly. The video featured our song—“Wind Song”—and we shot it in one take. It was so simple. When we put it on YouTube, it just took off.

People like Rosario Dawson and Estelle started to tweet about it. It didn’t have a press machine behind it; people were just tuning into something good. No one mentioned that the first half of the song was in Russian or that I’m singing in Russian; it didn’t matter. It just felt good to collaborate with these artists with no false pretenses and not too many or too few expectations.

TRIBECA: The music video was so refreshing because it did not seem manufactured or over-produced. You and Sunsay let the music speak for itself, and I think you did that throughout the documentary.

JOHN FORTÉ: In all my collaborations with my new Russian friends, it was important for us to let the music (or the story) speak for itself. As artists, that’s what we set out to do. Whether we’re writing, whether we’re photographing or filming, we’re trying to tell a story. When you have to cover up that story with kitsch or hyperbole, it is more difficult to get to that authentic place. Many people out there despise what I do, but I can accept that. [laughs] I’d rather art be polarizing than be a cause for indifference. I’d rather people hate my work than have them just walk by it like it was a part of the landscape.

TRIBECA: It was so interesting to hear you talk about your experience in prison and how therapeutic music was for you. The Russian Winter certainly documents the effect that music has on people. When you were teaching guitar to your fellow inmates, did you find that others experienced the same comfort/enlightenment that you felt?

JOHN FORTÉ: Yes. I remember one day, one of my students was trying to play the C chord. I watched him struggle as he learned how to hold the guitar properly and the correct finger placement. He finally performed one clean strum after a half an hour of muted strings, etc., to make a pure chord. I saw him light up. I would see him walking around the compound with these mini-guitars doing his homework. That’s growth. To share that growth at a time when I was growing myself was doubly rewarding.

TRIBECA: One of the most moving scenes in the documentary is when you talk about the acoustics of your cell in prison.

JOHN FORTÉ: And I didn’t plan on talking about that. The producer, Dream Hampton, flew out to Russia to conduct those interviews. Dream knew how to extract the stories that really gave the movie its sense of continuity, even though we were in different places from day to day, week to week. Her interview style was not about judging me, but about asking the right question that would lead to a deeper answer. You’ll walk farther down the path if you have the right guide. She allowed me to tear down that wall and speak to her as a friend. Thank God we had Petter Ringbom there to capture these moments so effectively. He inspired me to actually pick up a camera, and now I am shooting everything and am capable of capturing content that interests me.

TRIBECA: You performed at so many different venues. Which was your favorite?

JOHN FORTÉ: I have to say that it was the St. Petersburg’s Orphanage. We played a set there, and what really struck me was the joy in the faces of the children who were able to perform for us. There was this one little Russian boy, about 9 years old, who could only say three words in English, “What’s up, man!” I gave him a high five and asked him if he knew any other words, and he just said, “What’s up, man!” He didn’t need to say anything else. That was my favorite show.

There was something really special about having these exchanges with young people. That little boy could have been from Brownsville or anywhere, but what was so important to him was that he had a voice. That’s something I’ve experienced myself. His voice, like mine, is as valid as anyone else’s. I heard him and I saw him and I still think about him.

TRIBECA: Are your new Russian fans still keeping up with you?

JOHN FORTÉ: Absolutely. Every time I post something, I get responses in Russian. I speak better Russian than I do French, even though I’ve spent more time in Paris. My Russian friends are friends for life, and they have continued to spread the word. I have a multi-country visa now, which allows me to go back and forth. I’m looking forward to going back this summer, not this winter [laughs].

TRIBECA: If you could have dinner with any filmmaker, alive or dead, who would you choose?

JOHN FORTÉ: Terrence Malick. I love his use of natural light. I know we have the technology now, but Days of Heaven took so long to make because he would only film at the twilight hours. When you can do that and have a crew wait for you to reify your vision, that’s special.

TRIBECA: Do you have a favorite New York movie?

JOHN FORTÉ: It’s corny, but it has to be Trading Places. When I first saw that movie, I had no idea I would be going away to prep school and seeing both sides of the fence, as they say. Eddie Murphy is that archetype. He’s this street hustler who is living day to day, and you've got Dan Ackroyd on the other side, who has known nothing but privilege. I just remember really relating to the film because of the culture shock of going from Brownsville to Exeter.

TRIBECA: If you had a biopic, what would it be called?

JOHN FORTÉ: It’s not that original, but it’s the name of my sophomore album, I John. As a piece of music, it changed things for me because it allowed me to go a different direction. I exceeded those soft bigotries or low expectations of myself and became comfortable calling myself a rapper. I was willing to step outside my comfort zone and into a new kind of musicianship working with my spiritual godmother, Carly Simon, Tricky, Ben Taylor and other talented artists.

My life’s journey has taken me from Brownsville to Exeter to touring with The Fugees to receiving a 14-year prison sentence. I came out on the other side of that early, thanks to the presidential commutation from George W. Bush, and I am still striving to be the best John I can be.

TRIBECA: What makes The Russian Winter a must-see?

JOHN FORTÉ: Even though it’s called The Russian Winter , it’s a New York film. It’s about these people from New York who went on this journey. There are certain times in the film that you feel like you don’t know if you’re in Williamsburg or Greenpoint. That is because we remained who we were, even though we were having these life changing and eye-opening experiences.