Home » Tribeca News » The Darkness: Once Upon a Time in Anatolia
View All News

The Darkness: Once Upon a Time in Anatolia 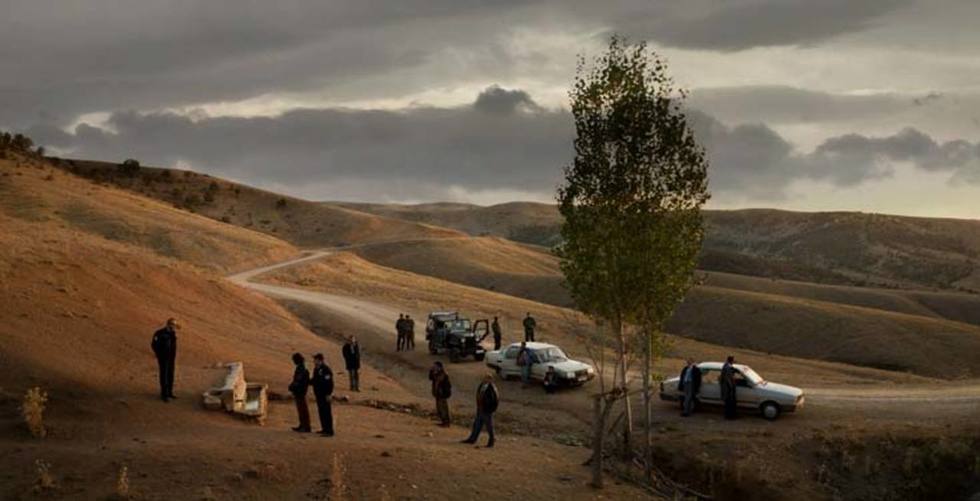 Nuri Bilge Ceylan’s Once Upon A Time In Anatolia was one of the most heralded films at the 2011 New York Film Festival. Selected by J. Hoberman as one of the fest’s must-sees, the Turkish filmmaker’s latest fuses Eastern European starkness and satire (think The Death Of Mr. Lazarescu) with a more poetic, magical sort of observation that is Ceylan’s alone.

Ostensibly about a murderer who is trying (and failing) to lead police (he’s already in custody) to where he buried the body, Once Upon a Time in Anatolia really is an examination of the absurd, empty, lonely nature of life itself. With the extremely composed ultra-wide shots that Ceylan favors to open scenes, the filmmaker manages to portray a group of humans as lost in the universe, tiny specks whose lives are so small compared to the greater mystery within which they are submerged. In some ways, it’s a realist response to Terrence Malick's heralded The Tree Of Life.

Last fall, I had the chance to speak with Ceylan at the offices of the film’s U.S. distributor, Cinema Guild. We’re sharing it now since the film opens theatrically on January 4 in New York City.

Tribeca: I wanted to start off by asking you about how the film is edited. You seem to not cut between shots very often at all—each scene goes shot to shot to shot, and your coverage is minimal. Do you edit the film in your mind before you shoot?

Tribeca: So to what degree does the film exist in your mind before you begin to shoot?

Tribeca: Can you tell me about the atmosphere that was in your mind for this film?

Nuri Bilge Ceylan: It was something indescribable, actually. Filmmaking, for me, is to tell the indescribable things. If I can describe it, I describe it and I get rid of it. These aren’t things you discuss with your friends. But one starting thing, for me, was the idea of the people like ants in the middle of darkness, the middle of the universe, with three headlights hopelessly exploring. I wanted the search process to feel like it would never end. I wanted the audience to feel that.

Tribeca: One thing you do is, in the middle of a conversation or a moment, you’ll cut away to something seemingly unrelated—like the scene with the police chief and the DA arguing, where you cut to an apple rolling down a hill and into a creek. Can you tell me a bit about where shots like that come from?

Nuri Bilge Ceylan: That was not in the script—I found that idea when I was walking around on an off day during the shoot. I saw this apple traveling around, by chance. It was a suitable place—the two of them were talking, and showing them for a long time in a static frame, two people in the darkness, talking—you can inject something in that. For that scene, I wasn’t sure whether I should use that shot or not. But when I put the dialogue over it, I liked it.

I wanted to show that the fate of the apple is not so different from our fate. Everything created in the world has the same destiny—animals, trees, humans all have the same kind of destiny. In some way, the apple represents human life, as it goes to rest with the other, rotting apples. Actually, in the rest of that shot, the apple moves back into the stream, but we didn’t use that.

Tribeca: Why stop the shot there?

Nuri Bilge Ceylan: Because to shoot the apple [as it keeps] moving creates more hope; it’s not realistic. Giving hope has become a cliché in cinema, and I don’t like that attitude.

Tribeca: What are you interested in trying to give to the audience?

Nuri Bilge Ceylan: I like the idea that we have to face the reality, to be able to lead a better life. This kind of giving-hope attitude prevents us from facing reality. We should face the darkness, we should face the hopelessness, so that out of it we can construct a reality against it. Critics and the audience push you to give hope, as if the artwork should have some kind of message of hope at the end—yes, you show the darkness, but where is the light? They ask me that. An artist isn’t responsible for that. You can create hope, if you like.

Tribeca: There’s so much art that is optimistic—why do you think it riles people up to have one film that has a darker worldview?

Nuri Bilge Ceylan: Because they want the reality to be a pill. They don’t want to work, they don’t want to create anything like a reality with their own values—that’s difficult work. The audience always wants the easier way—they want you to give them truth, as a pill. That’s the human attitude in general—they prefer the easier stuff. They are afraid of the darkness. They don’t want to face the dark side of the soul—they try to hide it, to be able to live. They don’t like moral or logical confusion.

Tribeca: Tell me more about your conception of your relationship with the audience—is the audience creating the meaning of the film along with you?

Nuri Bilge Ceylan: Yes of course, I prefer them to be active. Most audiences are not like that, so you have to accept a smaller audience if you believe art should be like this. If you are after the truth, the audience will be small. In a way, filmmaking is like sending a letter to the darkness—you don’t know who your audience is. You select your audience, in a way.

Tribeca: Earlier, you said that you couldn’t articulate the atmosphere of the film, that’s why you made it as a film. What is it about the formal tools of cinema that appeal to you, as opposed to other art forms?

Just like in life: in order to learn the truth, we have to use our imaginations. Every day, we are trying to understand reality from other things, from signs, because our talks are filled with lies. Everyone protects themselves. You have to use small signs to understand life. Films should be like that—you shouldn’t give the answers so clearly, like a pill, because even in life—your wife, you cannot be sure if she’s telling the truth or not. She says she loves you, but sometimes she says it to hide something.

Without a certain amount of ambiguity, I can’t appreciate a film, even if I agree with what the director is saying, because that director takes my freedom from me. But that doesn’t mean that the director shouldn’t have the answers in his head—he should have all the answers; otherwise he can’t direct actors—what expression they should give, and so on. The director should be responsible for all the details, even the smallest expression in the film.

Tribeca: What about the idea of filmmaking as a collaborative effort—how does that fit in with your conception of the director as having to know everything?

Nuri Bilge Ceylan: The director is a very lonely person on the set. The DP, the actors, they’re in a different world. Your relationship with them is on a different level. I never tell the actors the motivations behind the scene—I prefer to speak more technically. Generally, they don’t understand the reasons why I want something. I just say, this, not that. I deceive them. To get the result, you try different methods. If I want to change something in one actor, in general, I speak to the other actor. For instance, if you cannot get an expression from the actor, or you’re getting the wrong expression, you change the input to get a different expression out.

Nuri Bilge Ceylan: It’s very technical. You have to be technical—the camera is here, put this lens, and so on. He doesn’t need to know anything.

Tribeca: Some people feel like the director and DP should have a very deep relationship, talking about the philosophical meanings behind the film, the meaning of the scene and so on.

Nuri Bilge Ceylan: It’s not possible. You’re on very different levels. He has to concentrate on the technical things. Even the director is not sure of many things—the film will be made up in editing. The DP sees that sometimes I shoot one thing, like a person crying, but then maybe five minutes later we do the opposite—maybe laughing would be better here. How can he follow this? He has many things to do—to keep the actors in line, good composition, things like that.

Once Upon a Time in Anatolia opens Wednesday, January 4, at Film Forum. Find tickets.