5 Movies to Help You Understand The U.S. Mexico Drug War

Here are five informative movies that will prepare you for the extreme nature of Villeneuve’s new film SICARIO. 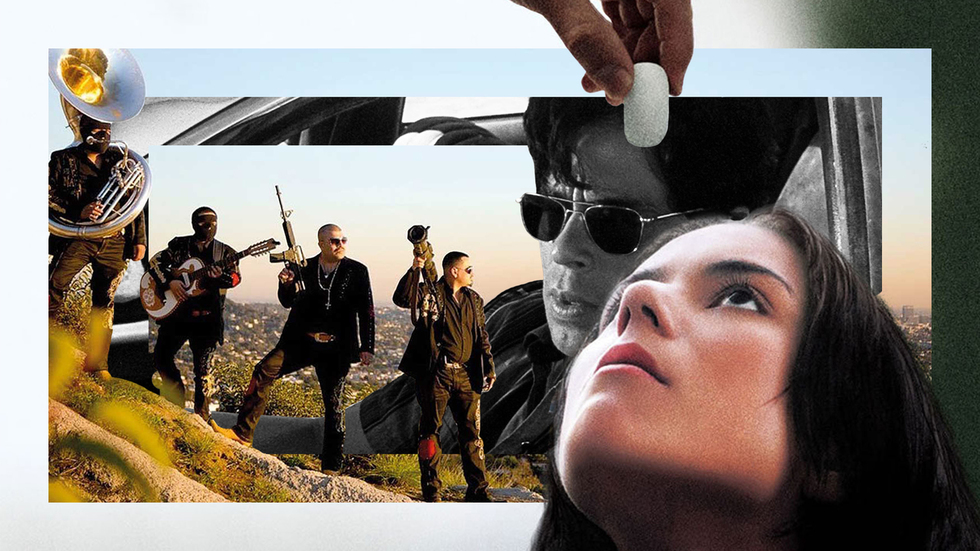 As the lead characters in director Denis Villeneuve’s new thriller Sicario cross over the border from El Paso, Texas to Juarez, Mexico, they are immediately transported into a cruel and disturbing world. Hanging from rope on an overpass are human bodies that have been mutilated by members of drug cartels who rule the border town with an iron fist. “Welcome to Juarez,” Benicio del Toro’s character Alejandro tells the carload of law enforcement he is traveling with as they look out their vehicle’s window and realize what evil they are up against.

When it comes to creating a nightmarish atmosphere to show what Mexico is experiencing under the control of the cartels, Sicario is second to none. It’s an unforgiving look at the horrors of the drug war and, in this case, the men and lone woman (Emily Blunt) who journey into the darkest corners to stop an unrelenting force.

Not sure you understand the reality of the U.S.-Mexico drug war? Here are five informative films that will provide context on the horrors of Sicario.

This critically acclaimed documentary film, which screened at the 2015 Tribeca Film Festival and won two awards at this year’s Sundance Film Festival (Cinematography Award and Directing Award), transports audiences to the center of the drug war where a Mexican vigilante group has taken it upon themselves to fight against the cartels who use intimidation to instill fear into their own people. Director Heineman also follows an American paramilitary group based in Arizona whose sole purpose is to stop immigrants from crossing the border into the U.S. Embedded into the battle, Heineman gets full access to the internal issues within the groups and exposes where the line between alliances begins to blur. Cartel Land exposes the frustration found on both sides of the border by citizens who want more safety offered by their government. The film forces us to asks the questions of whether or not real transformation can happen with the level of corruption taking place.

The U.S.-Mexico drug war is highlighted in this documentary featuring three individuals from different walks of life who have experienced the drug war from unique perspectives – a nun and human rights defender from Monterrey fighting her government to protect its citizens; an Anglo Texas rancher who became a drug smuggler in the 1980s; and a border patrol agent from El Paso whose undocumented parents raised him in the U.S. “With this film I wanted to go deeper,” Ruiz told TribecaFilm.com during an interview. “I wanted to create a chorus of voices and make a film where I could bring together people who might not normally be in a film.” Kingdom of Shadows puts a real face to the men and women who are fighting for justice and are not afraid to stand up for what they believe will keep their families safe. There is a hopefulness in Shadows that allows audiences to believe that speaking out will make a difference.

As frightening as Sicario makes narco traffickers and drug kingpins seem, this documentary film, which was nominated for the Grand Jury Prize at the 2013 Sundance Film Festival, features the celebrity-outlaw side of these groups who are praised through the country’s music and pop culture. Director Shwarz tells the story from the perspective of two men: a musician who is connected to the cartels and writes traditional narcocorridos, polka-inspired songs that celebrate the drug dealers, and a Mexican crime scene investigator who some call a “bullet collector” since none of the work he ever does leads to the conviction of any cartel members. Narco Cultura is an intense look into how the drug war has taken over the realm of pop culture in both Mexico and the U.S. and what it means as a society to find entertainment value in things that glorify cartel violence. Schwarz asks tough questions and allows audiences come to their own conclusions by offering a very balanced documentary with fascinating facts.

Nominated for a Best Actress Academy Award in 2004 for her role in this fascinating drama, actress Catalina Sandino Moreno stars as Maria Alvarez, a 17-year-old girl living in Colombia who is lured into the underground world of drug trafficking when she learns about how lucrative the job can be for someone like her. Her responsibility: to become a drug “mule” by swallowing small baggies filled with drugs and transporting them inside her body into the U.S. by airplane. When things take a turn for the worse, Maria is forced to make a decision that angers the drug dealers waiting for her to deliver the supply. Maria Full of Grace puts a face to the issue of drug trafficking with Moreno’s character taking charge of her own decisions and living with those consequences. As the title character, Moreno brings strength to the role and proves that even the innocent can be tempted by the power of drugs.

Winner of the 2000 Academy Awards for Best Adapted Screenplay, Best Editing, Best Director, and Best Supporting Actor (Benicio del Toro), Soderbergh's masterpiece is a multilayered crime drama set in the U.S. and Mexico where the drug war affects the lives of everyone from a high-profile government official (Michael Douglas) to the wife (Catherine Zeta-Jones) and son of a high-ranking drug trafficker. Oscar-winner Del Toro stars as Javier Rodriguez, a Mexican police officer who is trying to bring down the most dangerous members of a Tijuana cartel. Traffic is a realistic and hard-hitting portrait that shows just how many people can be involved in some way with the drug trade. While there is some hopefulness to the narrative in certain instances, director Soderbergh never softens the storylines. People die frequently and families are changed forever.