Spike Lee’s exploration of post-9/11 New York through the eyes of Monty Brogan, a convicted drug dealer on his way to prison, remains the filmmaker’s most controlled and intense work to date. 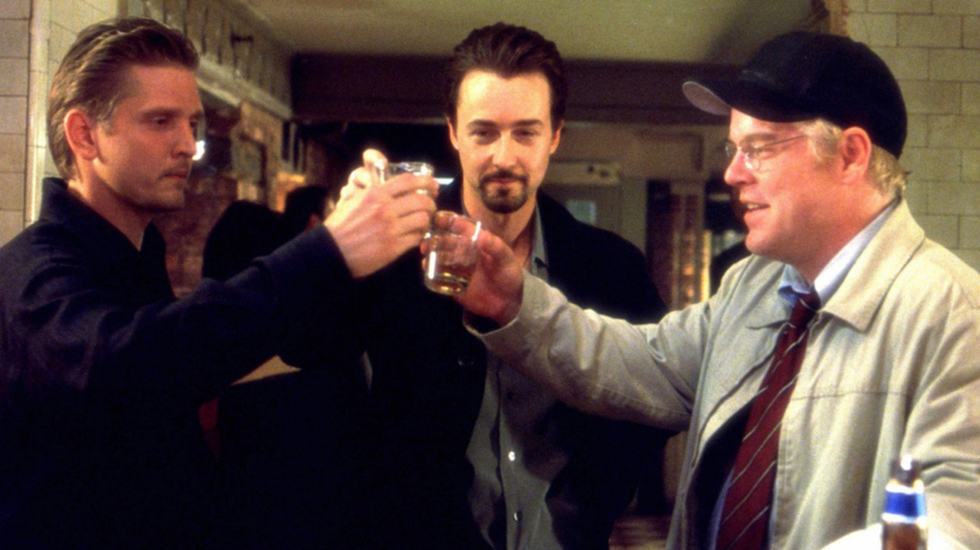 Spike Lee, one of cinema’s most controversial auteurs, exploded on the scene with films like She’s Gotta Have It and Do the Right Thing. Throughout his career, Lee has refined his own cinematic voice and style regardless of what mainstream Hollywood has to say about his work. His fresh approach to filmmaking and the unique stories he chooses to tell have secured him a loyal following while at the same time alienating some viewers and critics who are perplexed by his loudmouth style and refusal to compromise.

However controversial Lee might be, there is no denying his power as a filmmaker, and we believe that of Lee’s more recent films, 25th Hour best displays the essential elements of Lee’s genius. The logline is pretty simple. Monty Brogan is a drug dealer who spends the final 24 hours before entering prison to serve his sentence reevaluating his life by visiting the places and people most important to him. While the book was written in 2000 and published in January 2001, Spike Lee and author/screenwriter David Benioff chose to set the movie in post 9/11 New York, incorporating in the narrative the feelings of the city during that turbulent time.

Join us as we examine the components of this remarkable film that make it one of the most important films of the post 9/11 era as well as one of Spike Lee’s most accomplished works.

First, Benioff and Lee made the distinct choice to show the city at one of his lowest points. One of the constant themes throughout Lee’s filmography is showing how New Yorkers handle their beloved city in times of stress (Do the Right Thing, Summer of Sam, etc). Lee subtly weaves memorable and unsettling imagery that includes photos of the missing and of the devastation at Ground Zero throughout the film without ever resorting to sensationalism.

Lee incorporates the rhythms of a city in trauma and uses its desolate landscape as a reflection of his characters—their lives also shattered and they too are struggling to rebuild and find hope. One of the most remarkable aspects of 25th Hour is how Lee makes this small story feel operatic in scope all through his use of the city as backdrop. Surrounded by the landscape of devastation, the emotional turmoil of Monty and his friends is all the more dramatic.

Spike at His Most Restrained

While still keeping true to his signature style (note the trademark gliding double dolly shot after Jacob kisses Mary D’Annunizo), Lee is noticeably subdued. While Monty’s explosive tirade in the bathroom mirror (more on that later) is reminiscent of similar scenes in Do the Right Thing, it is missing the bravura and color that characterize similar scenes in previous Lee films. Lee is offering a stark portrayal of a man at the breaking point and it is not about him as a filmmaker. He is completely in control of his film—there is no fat to trim, no signature flourishes, even though the film clocks in at a little over two hours.

Perhaps this intentional sparseness is best explained by watching one of the film’s few deleted scenes above. In direct address to the camera, Monty, Naturelle, Frank, Jacob, Kostya and Mary tell the audience what the definition of “sway” is. To each character, it means a very different thing, but they all want it. Lord knows how long it took to assemble this montage (and it’s great), but with its extreme angles and jarring style, it would not have fit in tonally with the rest of the film. The exclusion of this scene speaks volumes about Lee’s editorial eye and restraint.

One of the most unforgettable (and defining) moments of the 25th Hour is the infamous “Fuck You” monologue. After having one last meal with his father at their family’s bar, Monty goes to the bathroom and sees that someone has written “Fuck You” on the mirror in permanent ink. In a five-minute monologue, Monty expresses everything he hates about the city from “the Chelsea boys with their waxed chest to the Upper East Side wives with their Hermés scarfs to the uptown brothers who never pass the ball” in a chaotic, profanity-laced diatribe of hatred and frustration.

In a form that is almost spoken poetry, Monty’s monologue is a bizarre love letter to the city, reluctantly embracing the many different types of people who consider themselves “New Yorkers.” As the monologue continues, it becomes ironically clear to the audience that the person Monty is most frustrated and angry with is himself.

Love him or hate him, one thing everyone can agree on is that Spike Lee knows how to get the best performances out of his actors. Edward Norton is exceptionally controlled as Monty Brogan, never sinking into the lurking melodrama of his character’s situation. He suffers silently, seething at the thought that someone close to him betrayed him, ready to explode at any moment. Barry Pepper and Phillip Seymour Hoffman play his childhood best friends, Frank Slaughtery and Jakob Elinsky, who come to Monty’s send-off party with their own baggage in tow. Both actors fully inhabit their roles: Pepper’s Frank is a crass Wall Street broker whose guilt is eating away at him; Hoffman’s Jakob is a sad-sack prep school teacher compulsively drawn to one of his students.

Rosario Dawson, who sadly may never have another role as rich as Naturelle, is pitch-perfect as Monty’s long-suffering girlfriend who struggles to keep Monty close even as he pulls away from her. Brian Cox plays Monty’s former alcoholic widower father James as a heartbroken man who has lost everyone who has ever been close to him. Though Spike Lee always seems to assemble great ensemble casts, the group of actors in the 25th Hour is something special.

The Importance of Collaboration

Though Spike Lee has a reputation for being hot headed, he also understands the value of a great collaborative team. In choosing David Benioff to adapt his own novel, Lee worked directly with the man who created his source material to change the backdrop of the story to post 9/11 New York. This key alteration and the cinematic landscape it made possible give this small, character drama a sense of urgency and importance.

Terence Blanchard, Lee’s longtime composer, provides a sweeping score that enhances the film’s more grandiose moments as well its intimate conversations. Cinematographer Rodrigo Prieto deftly incorporates different types of stock and uses grain and texture to create the distinct look of film. That Spike Lee consistently surrounds himself with the best talent has never been more apparent than with the cast and crew of the 25th Hour.

Treat yourself to a re-watch of this remarkable film.