We’re proud to honor pioneers and groundbreakers across all fields at the fourth annual Tribeca Disruptive Innovation Awards. 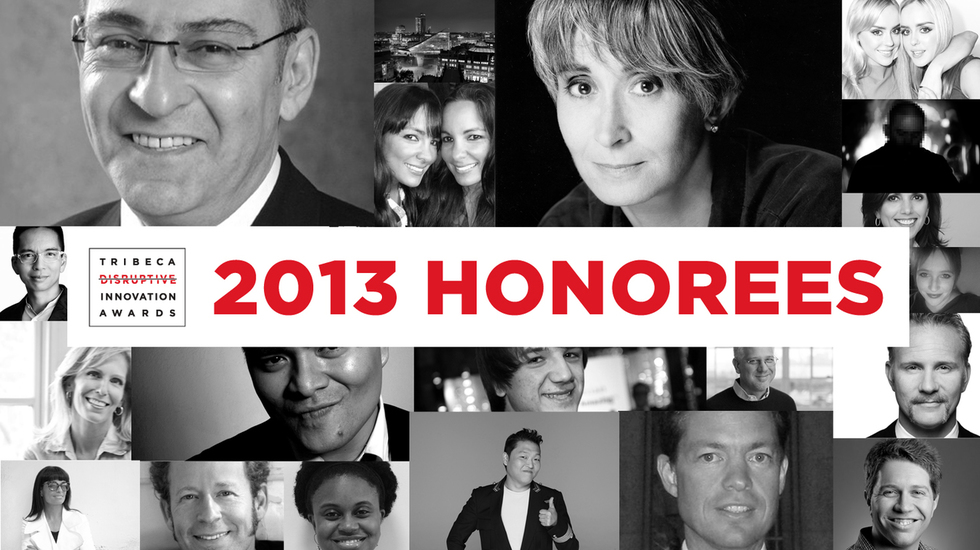 The Tribeca Film Festival (TFF), in association with the Disruptor Foundation and Harvard Business School Professor Clay Christensen, father of Disruptive Innovation Theory, is pleased to announce the innovative honorees from various disciplines and domains that will be recognized at the 2013 Tribeca Disruptive Innovation Awards.  The event will be hosted by NYU Stern School of Business and will take place on April 26.

Co-sponsored by Accenture with media support from The Economist, the awards ceremony will be co-hosted by journalist and public health advocate Perri Peltz and TFF co-founder and Tribeca Disruptive Innovation Awards Chief Curator Craig Hatkoff. It’s goal is to showcase applications of and advancements in disruptive innovation theory that have spread far beyond the original technological and industrial realms into the fields of media, arts and entertainment.

“In our fourth installment we are exploring the ever-increasing gap between the rate of technological change and the bumpier, slower-moving cultural adoption and diffusion,” explains Craig Hatkoff.  “We continue to push ourselves further out of our comfort zones, which is necessary for serious societal change, by highlighting exciting new applications and thinking.”

Legendary choreographer Twyla Tharp will be honored with a Lifetime Achievement Award for her approach to choreography. Through dance, she has created her own language and pushed the boundaries of our notions of movement for the past 50 years.

Honorees listed below will receive Disruptor Awards known as Maslow’s Silver Hammers, in honor of psychologist Abe Maslow who created the famous hierarchy of human needs.

Since graduating from Barnard College in 1963, Ms. Tharp has choreographed more than one hundred sixty works: one hundred twenty-nine dances, twelve television specials, five Hollywood movies, four full-length ballets, four Broadway shows and two figure skating routines. She has also written three books. She received one Tony Award, two Emmy Awards, nineteen honorary doctorates, the Vietnam Veterans of America President's Award, the 2004 National Medal of the Arts, the 2008 Jerome Robbins Prize, and a 2008 Kennedy Center Honor. Her many grants include the John D. and Catherine T. MacArthur Fellowship. She is a member of the American Academy of Arts and Sciences and an Honorary Member of the American Academy of Arts and Letters. In addition to choreographing for her own company Twyla Tharp Dance, she has created dances for companies worldwide, where her works continue to be performed. Today, Ms. Tharp continues to create.

The City of Manchester, once known as Cottonopolis, has always been in the forefront of movements and revolutions. What sets it apart from other historically significant cities is how it has continually reinvented itself to remain on the cutting edge. From the Industrial Revolution to today’s 21st Century City of Innovation, it is a metropolis with a disruptive legacy.  Manchester served as the locus for Karl Marx and Frederich Engels as they researched and wrote their seminal work. It serves as the home of the most famous intra-city rivalry between Manchester United and Manchester City football teams, one of the most viewed broadcasts on the planet with over 500 million viewers. Manchester’s DNA of revolution is carefully watched across the globe as it innovates its way into the future.

These two sets of identical twins/serial entrepreneurs tried to solve a very personal local problem and stumbled into what might become a global solution for millions of women who miss school or work during their “week of shame” because they don’t have access to sanitary napkins. THINX is a new type of women’s underwear that addresses this critical need. Their buy one, fund seven model is making it possible for women in the developing world to make and distribute reusable pads.

The death of a beloved uncle led Jack Andraka, who was 13 at the time, to develop a new and more accurate test for detecting pancreatic cancer, as portrayed in the GE FOCUS FORWARD film, You Don’t Know Jack. Jack’s method is 26,000 times cheaper, 168 times faster and over 400 times more sensitive than previous methods, making it a truly disruptive innovation. Jack was a speaker at TED in 2013.

Elise Andrew is being honored for pushing social boundaries to reach a wider audience.  Her wildly successful yet slightly irreverent title, I F*cking Love Science has attracted a new audience of over 5 million young science lovers; her less irreverent mirror Facebook page, entitled Science is Awesome has attracted 200,000 users. The use of culturally irreverent memes is attracting global attention to how to best  reach younger audiences.

Radio and television impresario Glenn Beck has led a fascinating yet controversial career.  What is not controversial is the highly disruptive innovation he has launched with The Blaze, a new and all-encompassing media source focusing on the internet and television, that may disrupt the traditional media business model. With majority ownership and accountable to his viewers and himself The Blaze is being closely watched by the media industry for its groundbreaking innovation.

Nicolas Berggruen
Think Long Committee for California, The Berggruen Institute on Governance and Author: Intelligent Governance for the 21st Century: A Middle Way Between West and East

Nicolas Berggruen is the Chairman of Berggruen Holdings, a private company, which is the direct investment vehicle of The Nicolas Berggruen Charitable Foundation. He is also the Chairman of the Berggruen Institute on Governance, which encourages the study and design of systems of good governance. Mr. Berggruen is a founder of NBI’s 21st Century Council and a member of the Think Long Committee for California. Berggruen’s “values” (as opposed to “value”) investing strategy includes rice farms in Cambodia, windmill farms in Turkey, and ethanol plant in Oregon and the redevelopment of poor inner cities.

Garrett Camp has unlocked the discovery potential of the web with his innovative discovery engine StumbleUpon. Delivering over 1 billion personalized recommendations per month, StumbleUpon is the largest web application of its kind. Garrett also co-founded Uber in 2009 to improve the efficiency of on-demand car service.  Travelers can now access Uber’s user-friendly interface in 16 cities across North America and Europe.

GE and cinelan have collaborated to create short films by renowned documentary filmmakers that highlight innovative people who are reshaping the world through act or invention. GE FOCUS FORWARD  - Short Films Big Ideas have established a new platform for storytelling with a global reach.

Forbes Magazine has reinvented themselves and disrupted the traditional journalistic business model, embracing all digital publishing platforms, demonstrating the potential fro print in a mobile world.  Utilizing freelance journalists and compensating them according to traffic, they have enriched the quality and scope of their content, increasing site traffic and significantly reducing overhead costs.  Since Feb 2011, traffic has increased from 15 million unique visitors to 45 million in January 2013.

By inviting innovators from all over the world to participate in their $10 Robot Challenge, AFRON has promoted robotics-related education, research and industry in Africa. Since it launched May 2012, AFRON has 300 members from 25 countries including Ghana, Nigeria, Kenya, Algeria, South Africa, Egypt, Tanzania, Cameroon, and Ethiopia, as well as affiliated members from the US, Switzerland, UK, France, Germany, Spain, Portugal, and Argentina.

The Henry Jackson Initiative (HJI) is a bi-partisan, transatlantic movement of business leaders, senior policy makers and academics focused on promoting a more Inclusive Capitalism. The HJI calls for international collaboration from businesses and other organizations to encourage the widest possible adoption of programs that improve capitalism as a driver of wellbeing for society.

Norma Kamali is known for her innovative style and inventive approach to fashion. Her directional, timeless concepts such as the sleeping bag coat, the high-heeled sneaker, clothing made from actual parachutes, influential swimwear, sweatshirt clothing as the forerunner of casual clothing and a collection of packable, wearable and multi-style clothing have made her a pioneer in the fashion industry. She has designed many iconic pieces including Farah Fawcett’s red bathing suit, which was recently inducted into the Smithsonian National Museum of American History. Her interest in public schools has been a key part of her community activities for the last 18 years. KamaliKulture is a platform for her empowerment initiative for women, and an important part of her long term goals as a fashion designer.

Kenzo’s interactive approach to film making, showcased in his 2012 World Humanitarian Day video: I Was Here, featuring Beyonce, has redefined the film experience. It is at once disruptive and inclusive, bringing the audience into the UN General assembly and making international humanitarian issues local to a single global humanity. His remarkable project “City of God’s Son,” is an audio driven cinematic experience made with a microphone instead of a camera featuring the voices of Jay-Z, Nas, Notorious B.I.G. and Samuel L. Jackson. It is an epic, a musical, a soundscape, a movie for the blind, an art installation, and a coming of age story.

Deborah Kenny is an educator that believes all the talk about testing, longer days, teacher unions, etc. is polarizing and misses the true key to education reform, which is changing the culture of schools. Her philosophy has been proven with stunning results. The charter schools in her Harlem Village Academies have outperformed schools in some of the richest neighborhoods in New York.

Beau Lotto is being honored for his work combining art, science and education in promoting the awareness of the roles of context and perception. Beau’s approach has the potential to create uncertainty and humility in a world of perceived absolutes, leading to opportunities for more open dialogues.

RISD’s initiative, a movement to add art and design to the national education and research agenda, fosters the true innovation that comes with combining the mind of a scientist or technologist with that of an artist or designer. RISD offers endless examples of how art and design education teaches the flexible thinking, risk-taking and creative problem solving needed to solve today’s most complex and pressing challenges.

Aaron Peckham developed a web-based dictionary of slang words and phrases that has democratized the evolution of language. By legitimizing and archiving ‘street’ language with his collaborative forum, Peckham has challenged the authority of traditional dictionaries as the gate-keepers of authentic language.

With the first YouTube video to reach 1 billion views, South Korean pop artist Psy has become an ambassador for his country and a leading crossover artist, launching K-pop onto the international stage. His hit song ‘Gangnam Style’ is more than a catchy tune and dance sequence, it is a cultural phenomenon.  It was ranked in the Yale Book of Quotations Top 10 Quotes of the Year.

Jose was catapulted into the center of the national immigration discussion after revealing his undocumented status in a widely-shared 4,000 word personal essay in the New York Times Magazine in June 2011. Jose has since founded Define American, a nonprofit, nonpartisan campaign dedicated to elevating the conversation around immigration, and has traveled around the United States engaging both documented and undocumented Americans in an honest dialogue on the issue. In June 2012, he wrote a follow-up story and appeared on the cover of TIME Magazine, along with 36 other undocumented young people. Through “coming out” so publicly and inspiring and facilitating others to do so as well through the use of digital and social media platforms, Jose has spearheaded the disruption of the narrative around immigration and who is telling whose story.

A limited number of tickets will be made available on April 9th. Click here for more information. Remember you can join in the conversation on Twitter just by using the hashtag #TFFDISRUPT.