Beyond 'Mad Max': 13 Essential Films Set in the Australian Outback

What's the deal with films set in the Australian Outback? With 'The Rover' out today, we investigate the allure of the Aussie desert in cinema. 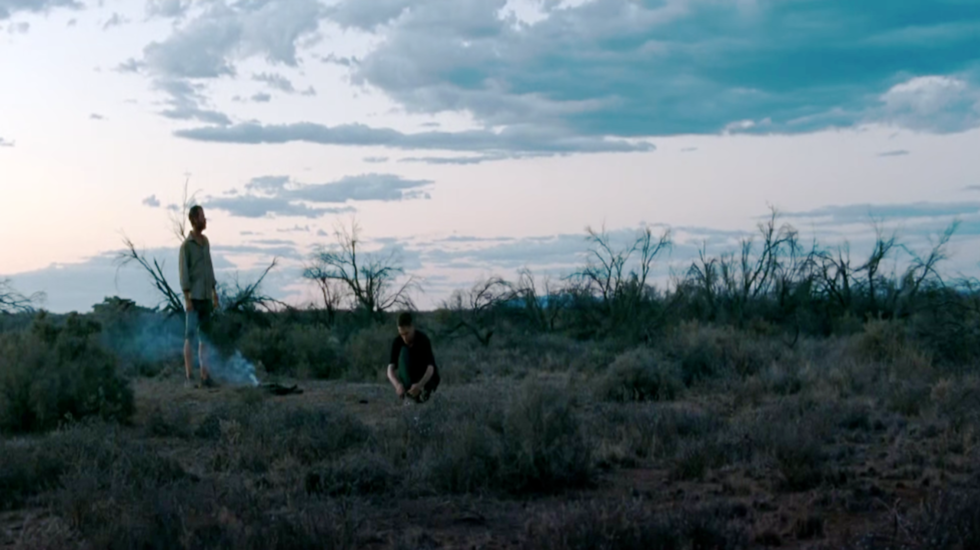 Over the past few weeks at the cinema, sitting through the dramatic trailer for The Rover—a dystopian drama out today and set in a futuristic Australian desert, directed by David Michod whose dark, epic Animal Kingdom in 2010 was critically adored—has gotten us thinking about all the Australian movies set in the desert. Or, as we call it down there, the outback. There are myriad films from the recently restored Wake in Fright (1971) and all the Mad Max movies to The Rover and, coming in September, Tracks, with Mia Wasikowska and four camels going walkabout from the country's desert heart to the ocean. Adam Driver plays the sensitive American photographer and love interest.

The Aussie desert has a sort of mythical status to filmgoers and Australians themselves who might never see it in their lifetime but grow up absorbing as part of our enigmatic indigenous history and exotic end-of-the-earth beauty.

The desert lends itself perfectly to these dystopian, apocalyptic and post-apocalyptic narratives and the dark romantic tales like Priscilla: Queen of the Desert. The vast, blistering landscape covers 70 percent of the continent and perfectly represents an inherent despair that, much of the world doesn't realize, runs through Australian culture. (Australian film in general can be quite bleak—we're a somewhat cynical, no bullshit culture not only because of our convict roots but also the landscape: all those poisonous bush and ocean beasts amid the supposed paradise.) The Aussie desert has a sort of mythical status to filmgoers and Australians themselves who might never see it in their lifetime but grow up absorbing as part of our enigmatic indigenous history and exotic end-of-the-earth beauty. We grew up with the Lindy "dingo-ate-my-baby" Chamberlain story and many of us watch Walkabout (1971) in school—a white father takes his little boy and girl into the desert for a picnic and loses it, setting fire to the car and shooting himself in the head, leaving the kids to the rescue of local and loin-cloth wearing Aboriginals.

So we’ve compiled a few of the Australian desert movies that are must-sees—not all of them critically brilliant but essential notches in the history of Australian cinema gone worldwide:

The Back of Beyond (1954): a black and white treasure, the story narrated by a posh male voice of the “never-never country,” pristine and barren, across which centuries of Aboriginals have lived and are slowly disappearing and into which now white man drives a mail truck to the one-horse stations and outposts. This is a quiet, heartwrenching clip, a flashback to a legend of two girls in sunhats navigating the “ocean of sand” with a toy box on wheels, a bottle of water and their puppy in search of help for their sick mother.

Wake in Fright (1971)— Australian male culture at it’s most brutal. It has changed only a touch since this terrifying movie came out, hurtled to cult status (a young Martin Scorsese gushed over it at Cannes), then promptly disappeared from Australian and world cinemas. The negative went missing and was almost destroyed when found in Pittsburgh several years ago and restored in 2009. Based on the 60s novel by Kenneth Cook, a discontented schoolteacher arrives for a night in a hellish mining town and loses his way among wasds of shirtless men who booze, gamble, mythologize and brutally hunt kangaroos.

Walkabout (1971)—an Australian classic: watch it for a sense of the country’s complicated history and relationship with its indigenous people and culture.

Crocodile Dundee (1986)—everyone knows the story. It’s the Australian outback—all fresh waterholes lined with death-rolling crocodiles amid great dusty stretches—meets New York City, both wild settings for adventure, romance and cultural cliches (Mick Dundee says NYC is like a lunatic asylum, just like back home. And, of course, the “that’s not a knife,” scene…)

Evil Angels (1988) (A Cry in the Dark in the U.S.)—Meryl Streep as Lindy Chamberlain who is on trial for the potential murder of her own baby, which she claimed was stolen by a dingo while the family was camping near Uluru, Australia’s famous red rock. The story and trial of Lindy Chamberlain is perhaps the most famous Australian desert story ever, a real life horror of suburbia venturing into the outback. Priscilla, Queen of the Desert (1994)—the desert here is the rich, inviting canvas for liberation, reflection and reinvention for “three hardworking guys,” escaping anonymity and showing the world the beauty of men in heels and fabulous costumes.

Love Serenade (1996)—Miranda Otto is a curious and curiously virginal adolescent named Dimity in a bare desert town named Sunray in to which Ken Sherry drives his two-toned brown Toyota. “Ever heard the expression, Stop the world, I want to get off? Well, my name is Ken Sherry and I got off in Sunray.” The soundtrack is entirely Barry White.

Japanese Story (2003)—Toni Collette is a rough talking geologist who has a love-hate affair in the outback with a doomed Japanese tourist. 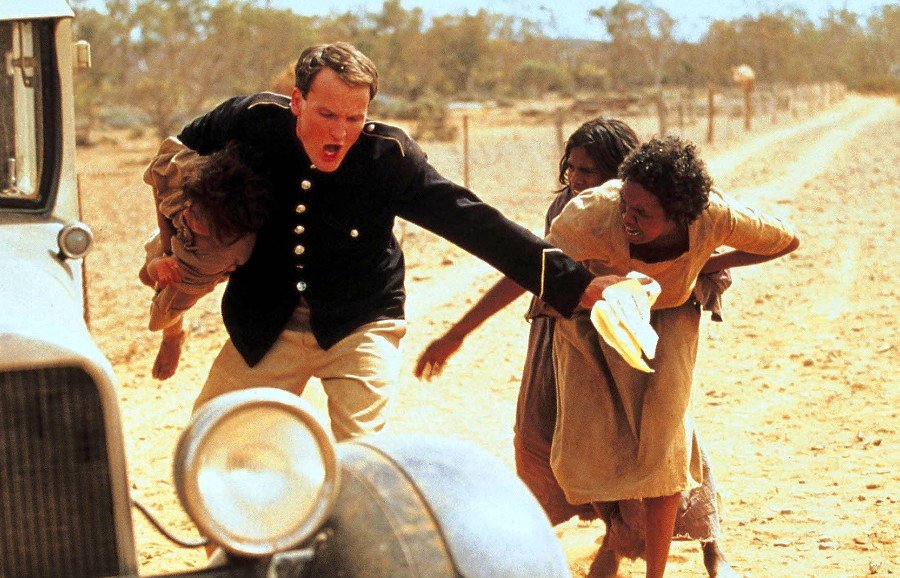 Red Dog (2011)—more blokes in a mining town in Western Australia, just a little more civilized than those in Wake in Fright. There are also pretty, sharp women here where the true story of a red kelpie cross lives on. Red Dog played matchmaker, saved lives and legendarily crossed desert Australia when his owner disappeared en route to his mining job.

Mad Max (1979, etc)—the desert as the post-apocalyptic setting, all anarchy, individualism and sheer male madness led by Mel Gibson and his “600 horses of fuel-injected machinery.” The Australian National Film and Sound Archive hilariously summarizes Mad Max as “a piece of impolite, independent cinema that had a profound effect on audiences and filmmakers across the world.”

Rabbit Proof Fence (2002)—a tear-jerking, brutal, dramatized version of the Australian government’s treatment of “half caste” children)—those born to indigenous mothers and white fathers, some the product of rape—in the 30s, 40s (in fact, it went on all the way to the 70s.) Based on the memoir by Doris Pilkington, the daughter of one of three girls who escaped a re-education camp and walked some 1500 miles across the Western Australian desert to reunite with the family they were snatched from. Kenneth Branagh plays AO Neville, the notorious do-gooder and relocation administrator, with his perfectly parted strawberry blonde cut.

Swerve (2011)—one good man witnesses one terrible accident in this… thriller set in the Australian desert (!) and a town called Neverest, which the New York Times headline described as “A Good Samaritan Ensnared in a Web With No Exit”.

The Rover (2014)— Guy Pearce and Robert Pattinson are two men among many (seeing the theme?) in the desolate future outback, years after an economic meltdown of sorts, referred to as The Collapse. Machismo, male solidarity, Chinese invasion, bad teeth and existential despair are abound.