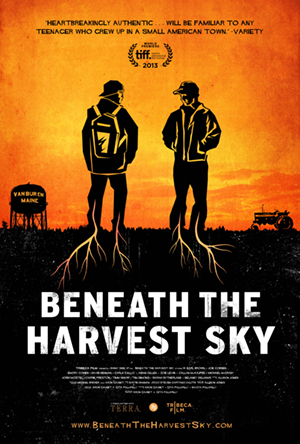 Casper (Emory Cohen – THE PLACE BEYOND THE PINES) and Dominic (Callan McAuliffe – THE GREAT GATSBY) have been fiercely loyal friends since childhood. Desperate for a way out of their quiet town on the Maine-Canada border, the boys make a pact to pool their earnings on a car and hit the road. But when Casper is drawn into drug smuggling with his outlaw father (Aidan Gillen – The Wire, Game of Thrones) to pay his share, their friendship is pushed to the brink and adult choices forced on them all too soon. A standout narrative debut from Aron Gaudet and Gita Pullapilly, BENEATH THE HARVEST SKY is a gripping coming-of-age thriller set against a layered and authentic portrait of small-town American life.

Two fiercely loyal teenage friends struggle to move on from their Maine/Canada border town when one is drawn into his outlaw father’s drug smuggling in this gripping coming-of-age thriller.