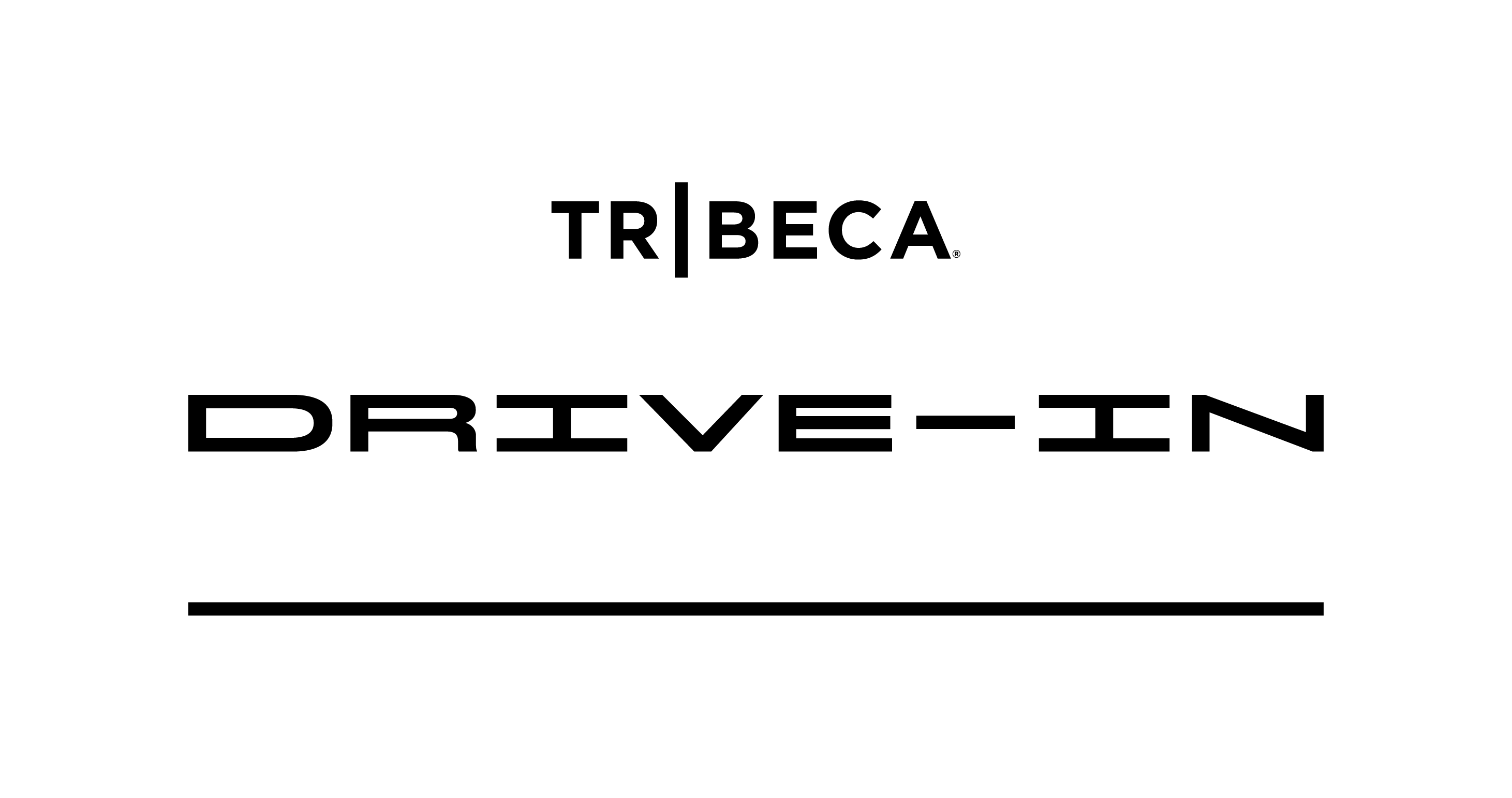 Curated Program Will Begin on July 2 and Will Roll Out to Los Angeles; New York; Arlington, TX; Miami; Seattle and More with Special Stadium and Venue Partners, including NFL Stadiums

NEW YORK, MAY 6, 2020 —Tribeca Enterprises, in partnership with IMAX and AT&T, today announced the initial schedule for the “Tribeca Drive-In” series, which will feature an exciting slate of over 30 iconic films, comedy acts, and more. Events will be hosted at drive-in theaters and exclusive venues in Los Angeles; New York; Arlington, TX; Miami; and Seattle, among other cities. The limited-engagement series will provide families with a safe, comfortable entertainment experience that captivates audiences of all ages, as the nation takes steps to emerge from coronavirus lockdowns.

Drive-ins are a signature program for Tribeca; they have been a part of festival programming since the beginning 20 years ago, and Tribeca is now expanding this program nationwide. The series will take place each weekend (Thursday through Sunday) throughout the summer, beginning on July 2, 2020 and running through August 2, 2020. Participating venues include AT&T Stadium in Arlington, TX; Rose Bowl Stadium in Pasadena, CA; Nickerson Beach in Nassau County, NY; and Orchard Beach in the Bronx, NY, among others to be announced in the coming weeks.

Beginning today, audiences can purchase tickets at TribecaFilm.com with a percentage of proceeds donated to Black Lives Matter. In appreciation for the workers who have risked their lives serving on the frontlines for their communities amid COVID-19, Tribeca Enterprises, IMAX, AT&T, and their pop-up venue partners will offer complimentary access and reserved parking to essential workers the first night at every venue.

Tribeca has also teamed up with the National Football League to help secure NFL team-hosted events and stadium venues, as well as to provide exclusive content. Participating NFL venues include Dallas, Miami and Seattle. Additional information on these NFL-hosted events, including ticket purchasing details and on-sale dates, will be announced at a later time by each respective team.

“At Tribeca’s core, we aim to bring people together through the arts to send a signal of unity and resiliency to the world during challenging times,” said Tribeca Enterprises and Tribeca Film Festival Co-Founder and CEO Jane Rosenthal. “As an immediate and safe solution, we’re excited to bring new and classic works from filmmakers, creators, and artists to communities across the country through the Tribeca Drive-In series. As the nation begins to emerge from months of quarantine, we look forward to movie theaters reopening and hope that the Drive-In serves as a reminder of the magic of the moviegoing experience.”

“The Tribeca Drive-In series is a tribute to movies and the shared experience of watching them, even if from our cars. In anticipation of theaters reopening imminently, we look back at what we love about the big screen experience,” added Tribeca Enterprises and Tribeca Film Festival Co-Founder Robert De Niro.

“We’re always looking to create new experiences for our fans and are excited about this unique collaboration with Tribeca and IMAX,” said the NFL’s Blake Stuchin, Vice President, Digital Media Business Development. “Watching great NFL content and classic movies in NFL stadiums on big screens in a safe, socially distant way will be a thrill for all in attendance.”

The Tribeca Drive-In series will encompass a variety of engaging and thoughtful themes in tribute to modern classics and all-time audience favorites, such as: Music Movies with Selena, The Bodyguard, and Straight Outta Compton, Sports Sundays with Creed, Jerry Maguire, Space Jam, and Love & Basketball, Time Travel Comedies with Bill & Ted’s Excellent Adventure and Back to the Future, High School Comedies with Mean Girls and Superbad, Ladies’ Night with Girls Trip and Bridesmaids, Hit the Road with Talladega Nights: The Ballad of Ricky Bobby and The Fast and The Furious, James Bond tribute with Goldfinger and Casino Royale, and Kids’ Night with Inside Out, The Lego Movie and Spy Kids. There will also be a 4th of July Celebration featuring Field of Dreams, The Wizard of Oz, and a special 25th Anniversary screening of Apollo 13.

Other programming highlights include: the 2020 Sundance Film Festival breakout hit Palm Springs, which will screen at the Drive-In series prior to its July 10th release, a special 45th Anniversary screening of Steven Spielberg’s Jaws, Spike Lee’s Do The Right Thing and Inside Man, and audience favorites like The Dark Knight, BeetleJuice, Pee-Wee’s Big Adventure, Meet the Parents, Meet the Fockers, Crazy Rich Asians, Wonder Woman, The Goonies, and Black Panther, as well as two shorts, Gloves Off and Tangled Roots, from this year’s Queen Collective, a program created by Procter & Gamble, Tribeca Studios and Queen Latifah to drive equality and inclusion representation in front of and behind the camera for multicultural directors.

In addition to the films, the series will feature some surprise elements including special filmmaker and talent introductions, live stand-up comedy, new teasers of upcoming film releases and more.

In Los Angeles, Tribeca is partnering with Comedy Dynamics, the largest independent comedy production and distribution company in the U.S., to bring a one-of-a-kind, stand-up comedy and entertainment experience to the Rose Bowl Stadium on July 9-12. Comedy Dynamics will feature four live shows over the course of the four days, which will also be recorded for wider audiences to enjoy in the future. The comedy events will be one of the first tapings with a live audience since the COVID-19 pandemic put a halt to most productions worldwide in early March. This first-of-its-kind experience blends comedy and film, with the nostalgic atmosphere of a drive-in theater, set in the heart of Southern California.

“We’re honored to be partnering with Tribeca to bring laughs to the world and to tell COVID that we won’t back down from that mission!!” said Brian Volk-Weiss, Founder and CEO of Comedy Dynamics.

Through working directly with city and state officials, city parks departments, and the United Drive-In Theater Owners Association, and by engaging vendors and restaurants across the country, the Tribeca Drive-In series is truly a community effort that will help support local businesses in communities nationwide.

AT&T is an official sponsor for the Tribeca Drive-In series, along with IMAX, as the lead technology partner. AT&T will be providing safe and contactless fun onsite, ranging from photo opportunities and film-inspired trivia to exciting giveaways. IMAX will be utilizing its exclusive Digital Re-Mastering (IMAX DMR®) process to enhance the image and sound of all Tribeca Drive-In presentations, will provide technological support and equipment to optimize its venues and screens, and will collaborate with Tribeca Enterprises to curate the program, drawing from its rich library of IMAX content.

About Tribeca Enterprises:
Tribeca Enterprises is a multi-platform storytelling company, established in 2003 by Robert De Niro and Jane Rosenthal. Tribeca provides artists with unique platforms to expand the audience for their work and broadens consumer access to experience storytelling, independent film, and media. The company operates a network of entertainment businesses including the Tribeca Film Festival; the Tribeca TV Festival; and its branded entertainment production arm, Tribeca Studios. In 2019,  James Murdoch’s Lupa Systems bought a majority stake in Tribeca Enterprises, bringing together Rosenthal, De Niro, and Murdoch to grow the enterprise.

About AT&T Communications
We help family, friends and neighbors connect in meaningful ways every day. From the first phone call 140+ years ago to mobile video streaming, we innovate to improve lives. We have the nation’s fastest wireless network.** And according to America’s biggest test, we have the nation’s best wireless network.*** We’re building FirstNet just for first responders and creating next-generation mobile 5G. With a range of TV and video products, we deliver entertainment people love to talk about. Our smart, highly secure solutions serve nearly 3 million global businesses – nearly all of the Fortune 1000. And worldwide, our spirit of service drives employees to give back to their communities.

AT&T Communications is part of AT&T Inc. (NYSE:T). Learn more at att.com/CommunicationsNews. AT&T products and services are provided or offered by subsidiaries and affiliates of AT&T Inc. under the AT&T brand and not by AT&T Inc. Additional information about AT&T products and services is available at about.att.com. Follow our news on Twitter at @ATT, on Facebook at facebook.com/att and on YouTube at youtube.com/att © 2019 AT&T Intellectual Property. All rights reserved. AT&T, the Globe logo and other marks are trademarks and service marks of AT&T Intellectual Property and/or AT&T affiliated companies. All other marks contained herein are the property of their respective owners. **Based on analysis by Ookla® of Speedtest Intelligence® data average download speeds for Q3 2019. Ookla trademarks used under license and reprinted with permission. ***GWS OneScore, September 2019.

About IMAX Corporation
IMAX, an innovator in entertainment technology, combines proprietary software, architecture, and equipment to create experiences that take you beyond the edge of your seat to a world you’ve never imagined. Top filmmakers and studios are utilizing IMAX theaters to connect with audiences in extraordinary ways, and, as such, IMAX’s network is among the most important and successful theatrical distribution platforms for major event films around the globe.

About Comedy Dynamics
Founded by Brian Volk-Weiss, Comedy Dynamics, a Nacelle company, is the largest independent comedy production and distribution company. The company is behind the reboot of Mad About You featuring Paul Reiser and Helen Hunt, and has produced Netflix’s Kevin Hart’s Guide to Black History, Netflix’s The Toys That Made Us, Netflix’s The Movies That Made Us, Jim Gaffigan: Noble Ape, The CW’s Discontinued, Animal Planet’s Animal Nation with Anthony Anderson, the scripted comedy on Hulu There’s… Johnny!, History’s Join Or Die with Craig Ferguson, MTV2’s Wild ’N On Tour, Hulu’s Coming To The Stage, and unannounced projects for Disney+, BET+ and more. Comedy Dynamics began releasing original films in theaters and released the acclaimed independent film Slut in a Good Way in Spring of 2019. In 2017 the Comedy Dynamics Network (CDN) launched and currently distributes specials, television shows and films to all major transactional platforms such as iTunes, Amazon, Google, PlayStation, Xbox and most major telco & satellite providers, including AT&T, Comcast, Charter, Dish, and Verizon.  The company has worked with a wide range of established and emerging comedic talent including Tiffany Haddish, Kevin Hart, Aziz Ansari, Jim Gaffigan, Ali Wong, David Cross, and many more. 17 Comedy Dynamics releases have been Grammy-nominated (with four wins), including all 5 in the Comedy Album category for the 61st Annual Grammy Awards in 2019.