We've got six movies that serve the leading ladies of the latest comedy about overgrown boys better. 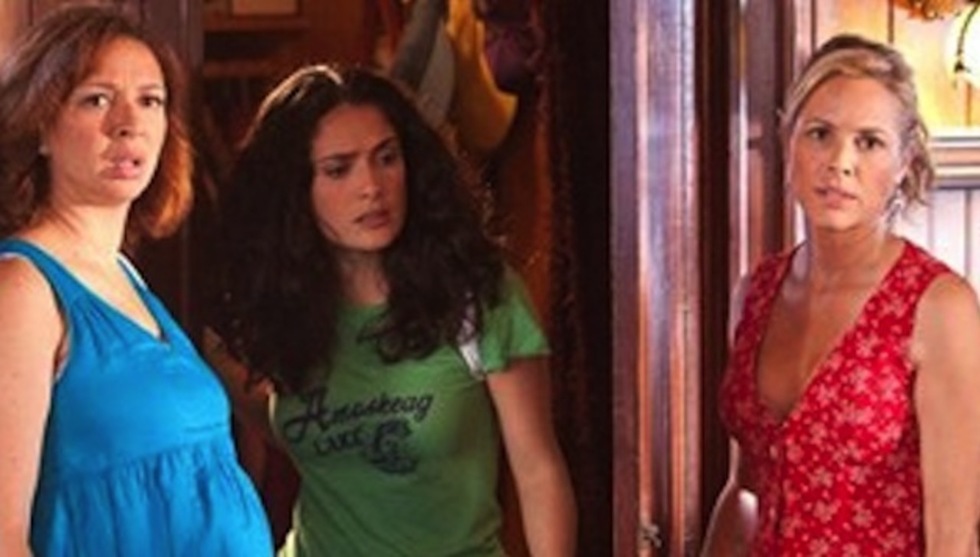 With this weekend's Grown Ups 2, once again Salma Hayek, Maya Rudolph, and Maria Bello will be drafted into onscreen service as the wives of Adam Sandler, Chris Rock, and Kevin James. All three of them are in roles that don't begin to approach the capabilities of these actresses. So rather than bum yourselves out contemplating the lack of good roles for women in Hollywood, you could take a pro-active approach and catch these three women in movies that are more worthy the talents of Hayek, Bello, and Rudolph. Six movies that didn't approach half of the box-office take of the Grown Ups movies (the original took in $162 million domestically). And what's more fun than a self-styled film festival? Nothing, that's what. Allow us to plan this one out for you.

Film #1: Savages
Box Office: $47.3 million
Reported Budget: $45 million
It's always good to kick these things off with something that's high on energy, and nothing fits that bill better than Oliver Stone's underappreciated carnival of sun-burned drug-war intrigue. Salma Hayek in particular is a scream as the drug-lord widow whose ruthlessness is only barely tempered by her instincts as a mother. Savages was treated like a middling effort by both critics and audiences, but it's truly a whole heap of fun, with John Travolta giving his best performance in some years, and Aaron Johnson and Blake Lively getting suuuuper sexy.

Film #2: A Prairie Home Companion
Box Office: $20.3 million
Reported Budget: $10 million
Maya Rudolph isn't in this film, Robert Altman's last, very much, but in her role as a verrrry pregnant stage manager, she gets to wander through any number of scenes and case such brilliant side-eye. It was an early stepping-stone for Rudolph and the chance to work with a master in his final days. More importantly, with and without Rudolph onscreen, the film is an addictive delight, so comfortable in its musical and comedic chops, and featuring great performances from Meryl Streep, Kevin Kline, Lily Tomlin, and Lindsay Lohan (no, really!).

Film #3: A History of Violence
Box Office: $31.5 million
Reported Budget: $32 million
Try not to get whiplash from the change in tone, but it's important to take things into a more serious direction, and David Cronenberg's meditation on the violence of men certainly is that. Bello came within a hair's breadth of an Oscar nomination for her work here as the wife of Viggo Mortensen's hitman-in-hiding. Her performance is sexy, smart, and quick on its feet as she moves from suburban normalcy to something closer to a nightmare.

Film #4: Frida
Box Office: $25.8 million
Reported Budget: $12 million
You could use some culture in your film festival, and there's no better showcase for Salma Hayek's talents as a Serious Actress than her performance as Frida Kahlo in this passion project. Enjoy the crossroads of sex, art, and politics that converge in the film, or assess the merits of Hayek's lone Oscar nomination, or just marvel at that unibrow. Either way, you'll have a great better sense of Hayek as a performer.

Film #5: Coyote Ugly
Box Office: $60.7 million
Reported Budget: $45 million
Who says that a film festival has to be all serious and no fun? Who says that it has to be all auteurs like Altman and Stone and Cronenberg? You deserve to have some light, silly fun, and Coyote Ugly does that job. What, are you too good for dancing? Singing? Tyra Banks and John Goodman? Bello's performance as the bar owner is flinty and charismatic, even if she never does get up on that bar to dance.

Film #6: Away We Go
Box Office: $9.4 million
Reported Budget: $17 million
Look at that box-office number. It's criminal. Sam Mendes's film of a script by Dave Eggers and Vendela Vida is episodic and a bit erratic in parts, but it's also a film that builds steadily, from one setting to another, until the final 2-3 "segments" land with a significant emotional weight. That weight doesn't exist without the strong throughline of lead performers John Krasinski and Maya Rudolph. By the time they reach the end of their road, staring out onto the water, trying to imagine their wonderful, scary future, it's all just so satisfying. Such a great way to end any film festival.