The Best Moments From the ‘We Could Be King’ Premiere 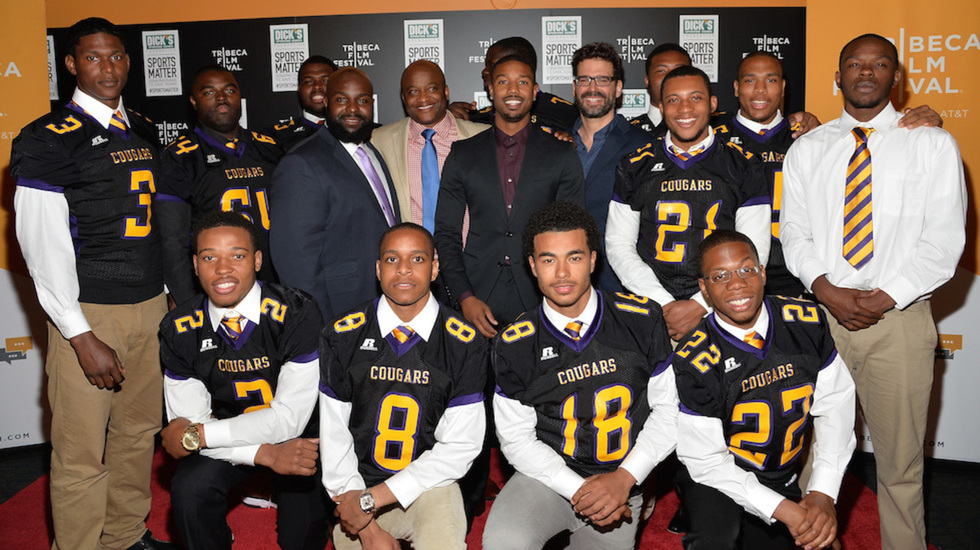 Victor Cruz, an electrifying wide receiver for the New York Giants, and Michael B. Jordan, who played an electrifying quarterback on Friday Night Lights, were among the celebrities attending last night’s world premiere of We Could Be King at the 2014 Tribeca Film Festival. But the real stars of the red carpet were members of the Martin Luther King high school football team, wearing their Cougars jerseys over their dress shirts and ties.

The MLK team made the 100-mile journey by bus from their Northwest Philadelphia neighborhood to the Landmark Sunshine Cinema in the Lower East Side on Wednesday. They sat in a crowd of coaches, parents, media, Olympic gold medal gymnast Nastia Liukin, ESPN analyst Mike Golic, and, of course, one famous end-zone salsa dancer.

The 80-minute documentary, directed with great economy by two-time Emmy nominated director Judd Ehrlich, chronicles the Cougars’ most recent football season, which started with little hope and much strife as a budget crisis forced Germantown High to merge with their longtime hated rival, MLK High.

The seemingly impossible task of forging a winning mentality in the face of a two-year losing streak and teammates who didn’t particularly like each other falls on the shoulders of 27-year-old first time head coach Ed Dunn.

Things get off to a rocky start as scuffles break out between teammates in practice and star players deal with setbacks that threaten their college aspirations, but the perpetually energized Dunn is determined to get his young athletes to buy into the virtues of humility and hunger.

We Could Be King provides a riveting depiction of the team’s roller coaster of a season. But more than that, the film shows the life-changing impact of organized sports on the disadvantaged youth who play it, and how successful programs foster a sense of pride and togetherness in communities where failure feeds on itself.

Despite the positive effect that participating in sports have on boys and girls -- for example, student athletes miss school 50% less often than non-athletes -- billions of dollars have been slashed from school programs in recent years.

The documentary’s backers, The Dick’s Sporting Goods Foundation, who partnered with Ehrlich and Tribeca Digital Studios, hope to use We Could Be King as a vehicle to shine a light on the importance of their Sports Matter campaign, which helps fund youth sports programs around the country. In fact, after the film ended to loud cheers and a standing ovation, Dick's CEO Ed Stack presented Philadelphia Superintendent William Hite a giant cardboard check for $250,000 to support youth sports in the city.

Here are three other great moments from the premiere and the movie itself, which will screen on ESPN2 on Saturday, April 26, at 8 p.m.:

“That ring is a lot shinier than an Oscar,” said Cruz. The Giants receiver also spoke about twice being kicked out of UMass for academic reasons and how “football was my motivation to get through school.”

2. Michael B. Jordan is a Human Torch on the court, Mike Golic is not.

The evening’s emcee, ESPN’s Mike Golic, a teammate of Jordan at the NBA Celebrity All-Star Game, said the actor, who will play The Human Torch in the forthcoming Fantastic Four reboot, had some impressive moves on the court. His assessment of his own game was not quite as complimentary: “I was a damn embarrassment. I air-balled a lay-up.” We assumed the former NFL defensive tackle was exaggerating. He wasn’t. (That’s Jordan with the nifty pass in the lane.)

Coach Dunn’s team refuses to take a back seat to anybody and nether does his beard, which ranks as one of the most awesome displays of good luck bristles in sports history, up there with Mike Napoli, Brett Keisel and James Harden. Golic said that he was sad to see that Dunn had trimmed his “power beard” but thankfully he didn’t go full face Monty.