More than Meets the Eye: Announcing the Tribeca Immersive Lineup at Tribeca 2019

Tribeca Immersive, the intersection of storytelling and technology, will debut more than 30 immersive experiences at the 2019 Tribeca Film Festival. 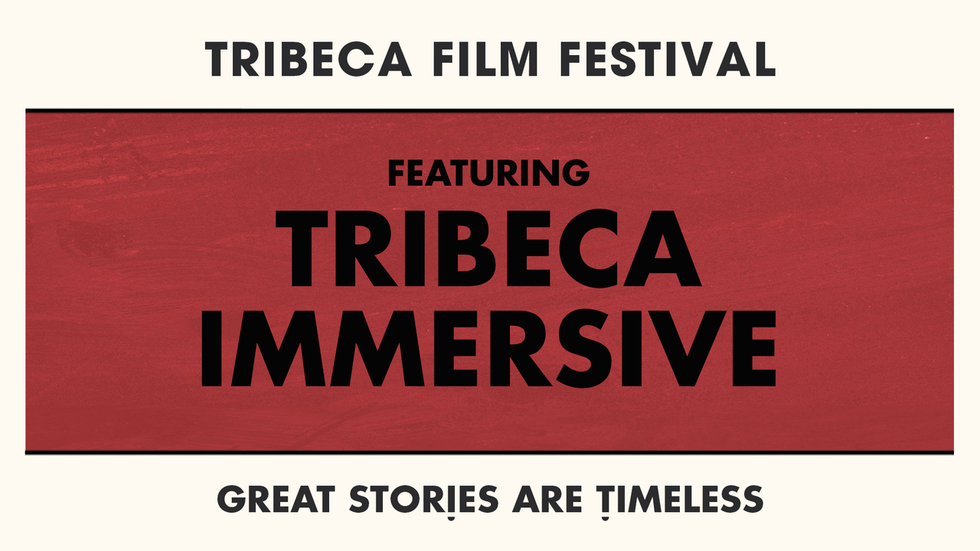 The 2019 Tribeca Film Festival, presented by AT&T, announced today that Tribeca Immersive, an incubator for innovation and a global stage where top VR creators debut their latest work, will showcase more than 30 cinematic and cutting-edge virtual reality, augmented reality, and mixed reality experiences by artists who are pushing the boundaries of storytelling with technology. Tribeca Immersive encompasses two events that run the duration of the Festival, Virtual Arcade, presented by AT&T, and Tribeca Cinema360. The Tribeca Film Festival takes place from April 24th to May 5th.

Visitors to the Virtual Arcade will encounter a lineup of 22 compelling VR, AR, and MR experiences and exhibits from new and established artists, with Tribeca Cinema360 featuring 12 curated screenings in a custom VR theater. Immersive attendees will be transported to places they’ve never been before, from a time-warping dream bubble (Future Dreaming, pictured below) to an alien jungle (Bonfire). Attendees will get to ride on the back of a jellyfish to experience the wonders of the deep and then see the impact of pollution from a vitally different perspective (A Drop in the Ocean). The Festival will premiere the first Doctor Who experience in VR, Doctor Who: The Runaway, voiced by the current and first woman Doctor, Jodie Whittaker, and also present a one-of-a-kind collaboration with popular historian/podcaster Dan Carlin and MWM Immersive that transports attendees to a WWI battlefield with stunning realism (War Remains).

"Tribeca Immersive remains committed to the power of new technology as a dynamic vehicle for storytelling," said Loren Hammonds, Senior Programmer, Film & Immersive for the Tribeca Film Festival. “This year’s programming spans a myriad of genres, including many world premiere VR, MR, and AR experiences.”

Numerous projects in this year’s program address relevant cultural issues, including gun control (12 Seconds of Gunfire: The True Story of a School Shooting, pictured below), gentrification (Common Ground), pollution and conservation (A Drop in the Ocean), and the persecution of the LGBTQIA community (Another Dream). Throughout the exhibition, Tribeca welcomes bleeding-edge creativity and top tech innovations, many of which signal the future of location-based entertainment.

At this year’s Virtual Arcade, the Storyscapes juried selections present new trends and innovative work across mediums that integrate various forms of audience participation, with interactive installations focused on emotion and the human experience. The Storyscapes Award, presented by AT&T, honors artists who bridge the gap between technology and storytelling. This year, four of the five experiences up for the award were made by women creators.

Tribeca Immersive includes innovative experiences from creators such as Eric Darnell and Baobab Studios (Bonfire), Jessica Brillhart (Into The Light), Jan Kounen and producers Atlas V (Ayahuasca), Celine Tricart (The Key), Clyde Henry and Felix & Paul Studios (Gymnasia), Adam May (A Drop In The Ocean), Dan Carlin and MWM Immersive (War Remains) and Fable Studios' Pete Billington and Jessica Yaffa Shamash (Wolves in the Walls: It’s All Over). Other notable names involved with projects include comedian Ali Wong (Bonfire), actors Jeffrey Wright and Noah Schnapp (Wolves In The Walls: It’s All Over), and musician Yo-Yo Ma (Into The Light).

“It has been a wild ride seeing how artists and filmmakers have responded to new technologies over the years, constantly pushing and prodding and exploring the edges of things in order to make beautiful and vital work,” said Ingrid Kopp, co-curator of Tribeca Immersive.

Sponsored by AT&T. 17 projects from nine countries, with 15 world premieres, make up this dynamic program.

2nd Civil War has broken out in America. In this voice-activated VR experience, you will drop into an Insurgent Hot Zone, interrogate the inner circle of the insurgency and decide: which side are you on?

An afternoon in June. Tokyo. 5 p.m. A girl jumps in front of the subway. Her soul rises from the rails. On the platform, the witnesses of the scene are in shock. It revived a trauma in them, painful memories they never overcame

Participants are immersed in visions triggered by a dose of ayahuasca. The spectator lives this through director Jan Kounen’s eyes as he travels on a spiritual voyage.

Nice job. You’ve crashed your spaceship into an alien jungle. Your instincts, nourishment cylinders, and a wary robot sidekick are all you have for survival… or so you think. With Ali Wong.

Cave is a coming-of-age story told through cutting edge Parallux technology, featuring a fully immersive holographic VR experience that can be shared by many audience members at once.

Children Do Not Play War is a cinematic VR tale of the war in Uganda told through the eyes of a young girl. Also playing in the program Cinema360: Her Truth, Her Power.

Explore the notorious Aylesbury Estate, concrete monument to the history and legacy of social housing in the UK, and home to a community affected by forces beyond their control.

Step inside the TARDIS with the Doctor in this beautiful, animated, interactive story from the Doctor Who team. With Jodie Whittaker, Richard Elfyn.

Discover a miniature universe at the heart of our survival. Become part of a Social VR adventure through the ocean food chain, to reveal a crisis of our making.

Ello is a sweet story about loneliness and friendship. When people expect friendship or love, proactively pursuing rather than passively waiting might lead to a surprising end.

Step into a dream, where the ghostly ephemera of a lost childhood await you.

Ascend Spring Studios and move through the movements of Johann Sebastian Bach's “Unaccompanied Cello Suite No. 2 in D Minor,” performed by the legendary Yo-Yo Ma.

Stealing Ur Feelings is an AR experience about the power of facial emotion recognition AI that exploits your reaction to its own content in horrifying ways.

Through infectious interaction, build a natural world made up of the colorful, surrealist art of acclaimed First Nations painter Lawrence Paul Yuxweluptun, until you are confronted by Colonialist Snake, who forces you to see the truth behind your actions.

Podcast legend Dan Carlin employs the unique power of virtual reality to transport audiences into one of the most extreme battlefields in history: the Western Front of The First World War.

Where There’s Smoke mixes documentary, immersive theater, and an escape room to explore memory and loss. Set within the aftermath of a blaze, participants work to determine the cause of a tragic fire by sifting through the charred remains. This two-part experience begins at the Virtual Arcade and concludes at 359 Canal Street.

Transport into the magic of VR cinema, where only you can help Lucy discover what’s truly hiding inside the walls of her house. With Jeffrey Wright, Noah Schnapp, Elizabeth Carena, Cadence Goblirsch.

Sponsored by AT&T. The competition includes four world premieres and one International premiere. One Storyscapes nominee will be selected by a jury to receive the Storyscapes Award, presented by AT&T, which recognizes groundbreaking approaches in storytelling and technology. The five projects come from Australia, Egypt, Iraq, Netherlands, UK, and USA.

Another Dream brings to life the gripping, true story of an Egyptian lesbian couple. Faced with a post-Revolution backlash against their community, they must choose between love and home.

Enter The Collider, a machine built to decipher the mysteries of human relationships. The Collider is an immersive virtual and theatrical experience exploring power, dependency, and the space between people.

Step into a time-warping dream bubble as four young Aboriginal Australians approach their futures. Be ready for an intergalactic adventure. Look out for the space emus!

An interactive VR experience taking the viewer on a journey through memories. Will they be able to unlock the mystery behind the mysterious Key without sacrificing too much?

Eight hours ago, teenager Emma McCoy vanished. All she left behind was a game. Now it's the viewer’s job to find her.

After a gunman shoots her best friend on the playground, a first-grade girl confronts a journey of trauma and loss after the Townville, South Carolina, school shooting.

Arthur Ashe emerged as an elite athlete who parlayed his fame as the first black man to win the US Open tennis championship into a lifetime devoted to fighting injustice.

A trove of 256 hours of sound archives of the Rivonia trial bring back to life the political battle waged by Nelson Mandela and his seven co-defendants against apartheid. This film looks at one of them in particular: Accused No. 2, Walter Sisulu.

A few minutes before the suspension of fighting in World War on November 11th, 1918, soldiers have to face a series of decisions.

It takes a special team of astronauts to survive the voyage to Mars without going insane. This crew will be lucky to make it past launch.

The short crime story takes place in a car, following Dong-Tzu, Ching-Tsai, and Ni-Sang, who get their hands on a valuable antique only to have the fruits of their labor shared with the newcomer, A-Che.

Her Truth, Her Power

Edith, a 14-year-old from Cameroon, journeys through the jungle seeking life-transforming surgery to remove a tumor on her jaw.

Globally, over 130 million girls do not go to school. Step into the life of one girl from India who is inspired by Malala Yousafzai to change her course.

Children Do Not Play War is a cinematic VR tale of the war in Uganda told through the eyes of a young girl. Also playing in the Virtual Arcade.

Armonia takes the ride of the dynamic original piano concerto "Armonia Degli Uccelli" and marries it to a universally accessible animation, to produce a uniquely layered spectacle of spatial storytelling.

Dreams Of The Jaguar's Daughter is a surreal VR documentary where Achik', the spirit of a young Maya immigrant, guides the viewer through her memories of an arduous journey north.

A blue-hearted rom-com about people who are going to lose someone they love. Nobody knows what to say, so they bicker, laugh/cry, get married. It's a romantic comedy, after all.

Tickets for the 2019 Tribeca Immersive Program

Tribeca Immersive takes place in the Tribeca Festival Hub located at Spring Studios at 50 Varick Street. Admission to presentations of the Virtual Arcade featuring Storyscapes is $40. Screening tickets for Tribeca Cinema360 screenings are $15.

Packages and passes are now available for purchase on the 2019 Tribeca Film Festival App, on iTunes and Google Play.