Join the brightest thinkers and innovators from across the realms of media, journalism, gaming and tech on Saturday, April 26 for TFI Interactive Day. 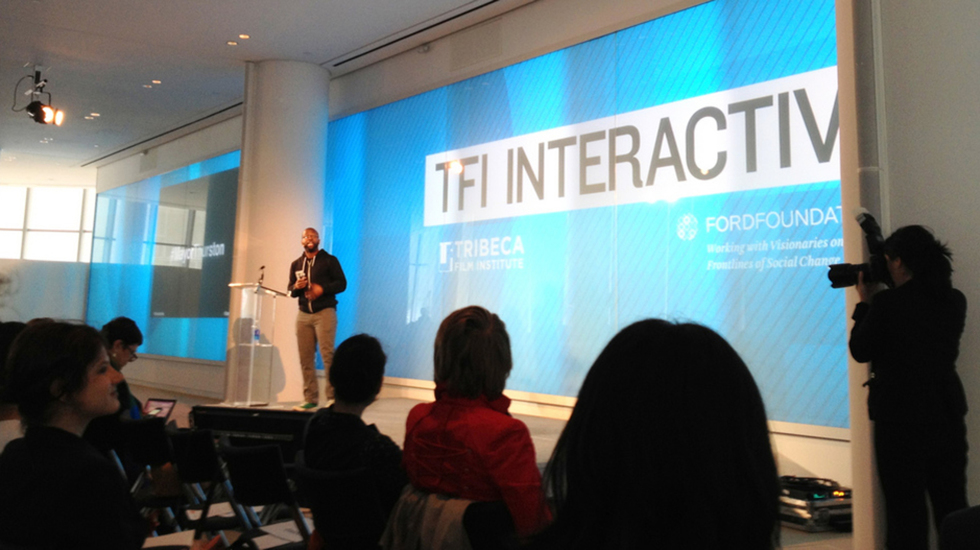 [Check out the full schedule here!]

The Tribeca Film Institute® (TFI) is pleased to announce an exciting program for the third annual TFI Interactive Day, supported by the Ford Foundation. The day-long meeting of the minds takes place on Saturday, April 26, during Tribeca Innovation Week at the Tribeca Film Festival® (TFF) and is devoted to exploring the future of storytelling in an ever-evolving digital world.   TFI Interactive (TFIi) will assemble content creators and trendsetters from multiple media for an all-day forum and an “Interactive Playground,” a new addition that will connect participants with selections from their projects.

Creative leaders from around the country will share their insights and invite participants to rethink storytelling paradigms during a full day of interactive panels and presentations. The event will take place from 9:30 am – 6:00 pm at the IAC Building in New York City and is open to TFI-invited guests, all TFF badge holders, pass holders for the new Tribeca Innovation Week, and TFI members. Click here to get your Tribeca Innovation Week Pass.

Additionally, TFIi is part of the new Tribeca Innovation Week, which includes a series of panels, discussions, and events featuring creative and tech verticals who will share their insights. The week will expand on Tribeca’s tradition of connecting the creative and tech communities. Projects from several Tribeca Innovation Week events will be showcased at TFIi, including Storyscapes, in collaboration with BOMBAY SAPPHIRE® Gin, a showcase of transmedia projects, as well as Tribeca Hacks <Mobile>, a two-day hackathon. sponsored by AT&T, that will focus on wearable technology.

The third annual TFIi event joins a range of other TFI initiatives that operate year-round to bridge filmmaking and technology.  These initiatives include an expanded Tribeca Hacks that provides a global series of workshops that advance the field of interactive storytelling as well as the TFI New Media Fund which, in partnership with the Ford Foundation, supports non-fiction, social issue media projects that integrate film with content across media platforms.

Check out the full schedule here, which will include numerous speakers, panels, and spotlights of the 2013 TFI New Media Fund grantees.

Don’t forget to join the conversation before, during, and after the event by using the hashtag #TFIi.