Late night TV's only woman host stopped by Tribeca for a laugh-heavy discussion about her career and current TBS hit show, FULL FRONTAL. 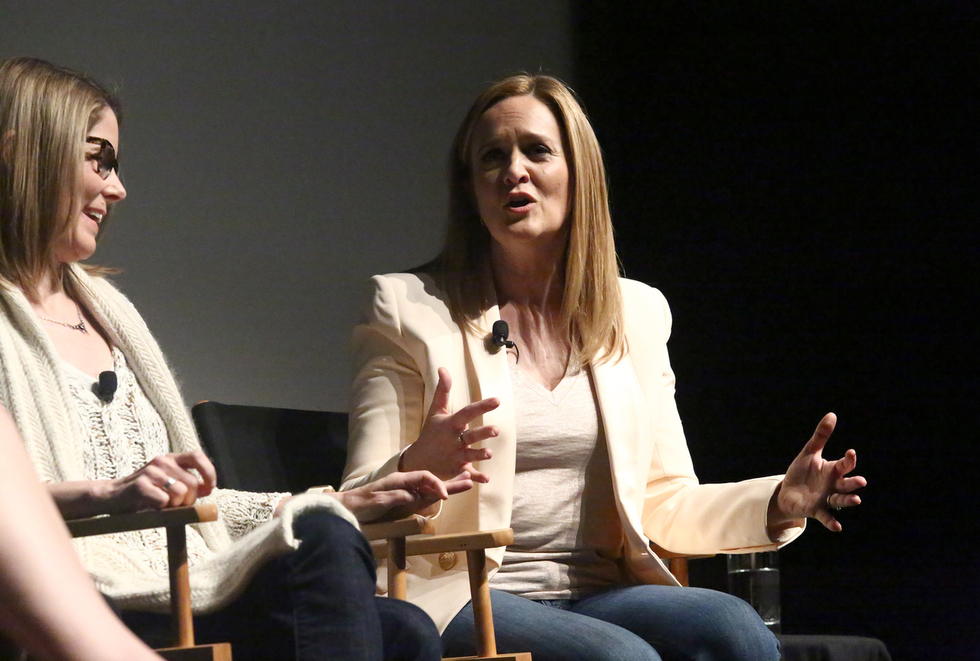 After 12 years on the Emmy award-winning The Daily Show with Jon Stewart, making her the Comedy Central show's longest-running correspondent to date, Samantha Bee became the only late-night female host with TBS' Full Frontal with Samantha Bee. The weekly satirical news series addresses immanent social and political issues, like the Syrian refugee crisis, the presidential elections, and abortion rights. Along with Full Frontal, Bee's The Detour, co-created with her husband Jason Jones (a fellow Daily Show alum), is currently airing on TBS.

Last night, Bee brought laughs to the Tribeca Tune In conversation with Full Frontal's head writer, Jo Miller, moderated by Stacey Wilson Hunt, Vulture’s first-ever Hollywood Editor. Hunt began by asking how they first "knew they were funny." Bee told of how at age six or seven she made a show called "News for Goofs," in which she would spy on her family and "do news reports" on them.

Bee and Miller joined The Daily Show separately but both as part of the program's efforts to diversify and incorporate more women. Bee called the initial process, during which she'd read jokes written by Steve Carell, "woefully insufficient."

Full Frontal premiered a year after Jon Stewart left The Daily Show, but replacing him was never an option, she said. Bee already had The Detour in the works and was offered the chance to produce her own show on TBS soon afterward; she didn't hesitate to sign a contract with the very supportive network. Miller was the first person she called to write for the show. "Let's do exactly what we want to do for as long as we can," was Bee's attitude from the start. "Fuck everyone else."

When asked where Full Frontal's topical ideas come from, Bee referred to her "swamp," a.k.a. her vagina. ("That's so gross!" said Miller.) She and Miller feel it in "the gut" if a story will work and communicate mostly virtually or online. Really "depressing" stories that have little to no comedic potential are discarded, even if they involve an interesting subject with news value. Such was the case with a story on foster children, which Bee said would only make her cry.

For the pieces in which Bee interviews people on the other side of the political spectrum, she prefers to establish an "equal footing" and not "ambush" them. For a report on abortion, she actually "had a nice time" with the man who opposed a woman's right to free choice. "He didn't like the piece," she said, but they were "amicable." They do, however, receive "a fair share of hatred" from unhappy viewers. They have their own "rape threat hotline," Miller joked, in a reference to a famously infuriating, while still very funny, story they did on rape kits.

Bee and Miller later touched on diversity and several times emphasized the significant benefits of having diverse voices in writers' rooms and on screen. "Anything you can do to broaden the perspective" is important, said Bee, and cited a story on a Jordan Refugee Camp as a segment she loved doing and that wouldn’t have been possible without a different voice in the room. It's a "female-dominated" workplace, in which even the men are "very feminist." "We're still building our office," admitted Miller, and said that reaching out for non-white additions has been a "failure"; they hope a new mentorship initiative will change that.

A father in the audience asked Bee what advice she would give to young parents. "My daughter is really sick right now, and I'm at Tribeca," she responded, adding, however, that they spent the morning together. A balance that allows you to do the work you want to do is possible. "You can do it all," said Bee. "There's hope. I fucking love being a parent." Seeing her children at night after a long day at the office "restores her."

Before the night was over, Miller gave some strong advice of her own: "Have a point of view. Be a weirdo. Be interested in stuff." You should take the stance of, "I have to get my truth out, and I want to do it in comedy." The "swamp" resurfaced at the end of the talk, now taking the form of a clam. Apparently, a critical viewer called what Bee does "clam-splaining," a term she has adopted and uses often in meetings, never failing to open her legs as she says it.