Home » Tribeca News » What to Do Today: April 21
View All News 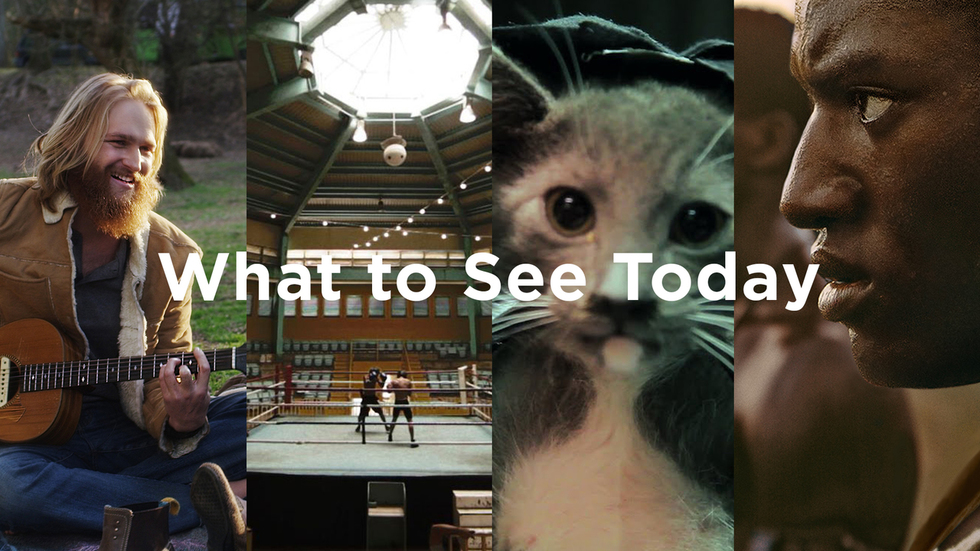 There's no such thing as "sold out" at the Tribeca Film Festival. Even if advance tickets are no longer available, don't give up—try our Rush Tickets policy. We admit those standing in the Rush line approximately 15 minutes prior to a film or panel's scheduled start time, until a theater is at capacity. Lines begin forming approximately 45 minutes before each screening, so be sure to arrive early.

The Ride
Section: Viewpoints
Directed and written by Stéphanie Gillard. (France) – World Premiere, Documentary.
The Ride takes us along the annual 300-mile trek through the South Dakota Badlands. There, young men and women of the Lakota Sioux ride horseback and reflect upon the history of their ancestors. This intimate, stunningly photographed account captures the thoughts and emotions of the young riders and the adults who guide them along their journey.
TIME: 4:30 p.m.
BUY TICKETS HERE.

Equals
Directed by Drake Doremus, written by Nathan Parker. (USA) – US Premiere, Narrative.
Set in a sleek and stylish future world, Drake Doremus' sci-fi romance envisions an understated dystopia, where all human emotion is seen as a disease that must be treated and cured. Against this backdrop, coworkers Nia (Kristen Stewart) and Silas (Nicholas Hoult) begin to feel dangerous stirrings for one another. An A24 release.
TIME: 3:00 p.m.
BUY TICKETS HERE.

Indigenous Media's Film Incubator Project
Section: Tribeca Digital Creators Market Special Screening
With Josh Hutcherson and Jake Avnet, powered by The Black List
The Indigenous Media Film Incubator, in partnership with actor/producer Josh Hutcherson and Michelle Hutcherson's Turkeyfoot Productions, and powered by The Black List, is aimed at discovering and mentoring emerging filmmakers. Through the incubator, Indigenous Media has committed $100,000 to produce five short films from generation-defining screenplays that feature core characters in their late teens to late twenties, one of which Hutcherson will direct. The incubator will help new storytellers navigate the process of taking their story from the page to the screen and create films that can thrive on digital/emerging platforms. There is also the potential to fund and produce feature-length films based on the shorts.
A conversation with Josh Hutcherson and Jake Avnet. Moderated by Variety's Todd Spangler.
TIME: 11:00 a.m.
BUY TICKETS HERE.

Starring Austin Pendleton
Austin Pendleton is that quintessential character actor you might recognize. We follow Austin as he reflects on his life and craft, while his A-list peers discuss his vast influence, dogged determination, and what it means to be an original in today's celebrity-obsessed world.
After the movie: Star and subject Austin Pendleton discusses his career with fellow actors, including Olympia Dukakis, Peter Sarsgaard, George Morfogen, and Denis O'Hare, moderated by Gordon Cox (Variety).
TIME: 2:30 p.m.
LOCATION: SVA 2
BUY TICKETS HERE.

I Voted?
How do you know that your vote is recorded as intended in an election? After South Carolina candidate Alvin Greene overwhelmingly won the Senate Primary despite having not campaigned, a pandora's box of questions opened regarding the voting process, particularly in a digital age where we rely on computer systems to act with integrity despite the use outdated and unregulated technology.
After the movie: Writer-director Jason Grant Smith, executive producer Katie Couric, and more.
TIME: 5:30 p.m.
LOCATION: SVA 2
BUY TICKETS HERE.

Our City My Story
Don’t miss this free screening featuring some of the brightest young filmmakers in New York City. The films premiering will compete for awards in the scripted, documentary, and experimental genres.
TIME: 6:00 p.m.
LOCATION: Bow Tie Cinemas Chelsea 7
FREE WITH TICKET

TRIBECA TUNE IN, With media support from Vulture the entertainment and culture site from New York Magazine

Roots (History) premiere
TFF attendees will get a special opportunity to see an episode of HISTORY’s eight-hour miniseries, Roots, in advance of its Memorial Day premiere. Roots is a historical portrait of American slavery that follows one family over many generations. The lineage begins with young Kunta Kinte, who is captured in his homeland of the Gambia and transported in brutal conditions to colonial America. Recounting the journey of one family and their will to survive, Roots is an inspiring story about the desire to carry on a legacy despite enormous hardship and inhumanity.
After the episode: Conversation with select cast and directors.
TIME: 6:00 p.m.
LOCATION: SVA1
BUY TICKETS HERE.

Free Like the Birds
Sophie Cruz, a six-year-old girl fights to keep her family together as the threat of deporting her parents looms over her. Determined to keep her family together she travels to Washington DC, breaks through police barricades, and talks to the Pope. A girl on a mission.
After the short film: An in-depth conversation with director Paola Mendoza, producers Grace LaMorte and Joseph LaMorte, and prominent activists about immigration.
TIME: 8:30 p.m.
LOCATION: SVA 2
BUY TICKETS HERE.