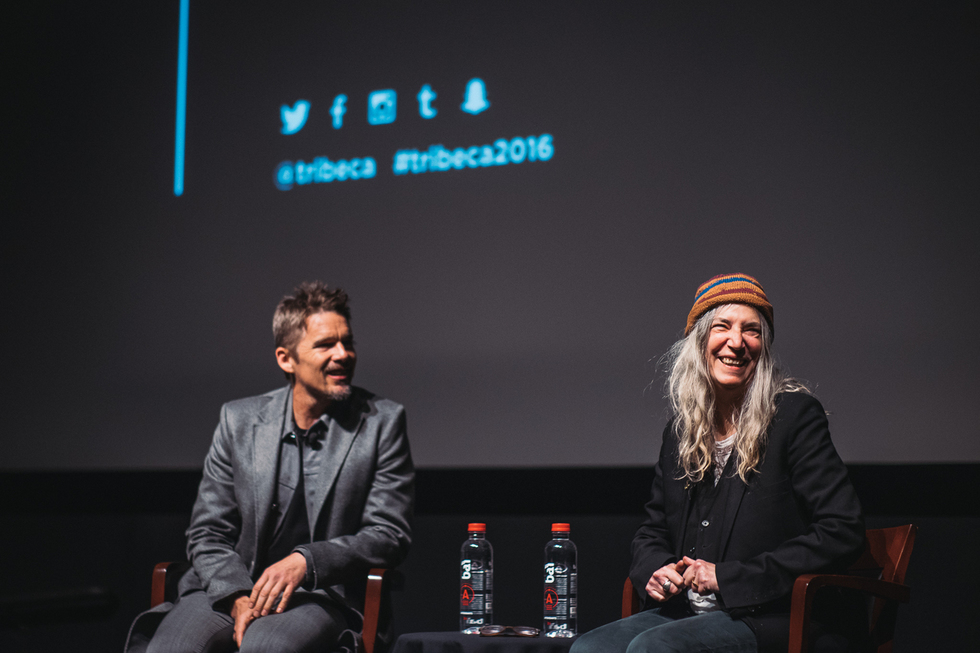 The plush auditorium of Chelsea's SVA Theatre provided the setting for a talk between two quintessential New York artists that could've very easily taken place in a Greenwich Village café or on a bench in Washington Square Park.

Although they've never really worked within the same medium, Patti Smith and Ethan Hawke represent two separate generations of gutsy, no-frills New York artistry. Yet their pairing for the 2016 Tribeca Film Festival's inaugural Storytellers talk seemed perfectly fitting. Smith might've been the centerpiece guest, but what emerged from this meeting felt less like an interview and more like a freewheeling conversation between two "abstract friends," as Smith amusingly but affectionately defined her relationship with Hawke.

The pair's funny and far-reaching free-form discussion began with New York's reigning poet-prophet, still experiencing jet-lag from a flight back from Europe, relaxing a slightly confused and clearly nervous Hawke, who wasn't sure how to approach his role as moderator. "Let's just be ourselves," Smith warmly reassured him, allowing him to tell an introductory anecdote about hearing his young mother utter Smith's name for the first time, with the claim, "Patti Smith stole my life."

The crowd at SVA laughed, but the sentiment was almost immediately clear: Smith’s legendary career has been a lesson in approaching each and every turning point with clear eyes and a rebel pride. "You gave yourself permission to be yourself," Hawke explained, as Smith modestly confirmed that she has had a "good and rough life."

Hawke could've easily spent the next hour fanboy-ing himself speechless, but Smith quickly took over the conversation and heaped lavish praise on Hawke's "beautiful" performance as jazz great Chet Baker in the just-released Born to Be Blue, a biopic that “moves like methadone,” as Smith herself put it, before quickly clarifying that she has never actually done it. Born to Be Blue quickly led to a discussion of Baker, whom Smith almost managed to feature on Horses' sorrowful final track, "Elegie," until an impossible $5,000 fee put a stop to what was to be an improvisational trumpet solo over the song’s gorgeous final lines. "I hear the echo of him [in the song]," Smith bittersweetly claimed.

But Hawke's performance also led to a rangy conversation about acting, which Smith has briefly dabbled in on both stage and the small screen in brief cameos on Law and Order: Criminal Intent and The Killing. Hawke asked Smith why she hasn't acted more, aside from a famous teaming with ex-boyfriend Sam Shepard in their underground play/relationship "swan song" Cowboy Mouth. Smith confessed that she has always dreamed of playing Brecht's Mother Courage, but that seeing Meryl Streep in a 2006 Public Theater production drew both intense envy and admiration and quickly quashed her dreams of taking on the role.

The conversation then turned to the topic of success, which caused Hawke to share an admittedly "impolite" story in which the late, great Philip Seymour Hoffman coolly reamed him out for criticizing Al Pacino's covetousness for his long-delayed Academy Award. “You ever won one?” Seymour asked him on the set of a film, most likely Sidney Lumet's 2007 film Before the Devil Knows You're Dead. "It's a confusing thing. Don't be too hard on him."

But Smith, who has won her own fair share of prizes and cheekily owned up to loving them all the same, quickly put the topic into perspective by espousing the value of personal and often invisible self-triumph: "The only real success is when you know you’ve done something well."

The pair went on to talk about a number of far-flung subjects, from Smith’s passion for detective stories—which won't be news to anyone who has read her gorgeous and galvanizing memoir M Train—to their shared admiration of Law and Order's criminally underrated Vincent D'Onofrio to their thoughts on the writing process, performance rituals, and live performance. On the latter, Smith admitted that her rock star persona "was not a planned thing" and "nothing [she] aspired to," before expressing that it was the diligent act of writing and reciting poetry for audiences that allowed her to come into her own.

"I'm really of and from the people as a performer," Smith announced, further solidifying herself as an icon of considerable, superhuman stature and rare human soulfulness. When an older male audience member stood up during the Q&A to enthusiastically ask Smith about an early, pre-fame gig, a blushing Smith was able to remember and recount the exact shows with fond detail and a twinkle in her eye.

Patti Smith has always related to audiences and individuals like no other performer before or since, making the mundanities of daily living into something moving and magical. Smith needn't have apologized at all for her self-proclaimed, jet-lag-induced incoherency during the talk. Her gift for making the everyday extraordinary continues to be as effortless and enduring as ever.

WATCH A CLIP FROM THE TALK NOW: