Home » Tribeca News » Baz Luhrmann Talks Prince, Nas, and Netflix's THE GET DOWN With Nelson George at Tribeca 2016
View All News

Baz Luhrmann Talks Prince, Nas, and Netflix's THE GET DOWN With Nelson George at Tribeca 2016

The visually extravagant filmmaker behind MOULIN ROUGE! and THE GREAT GATSBY reflected on his career and offered new info about his highly anticipated Netflix series. 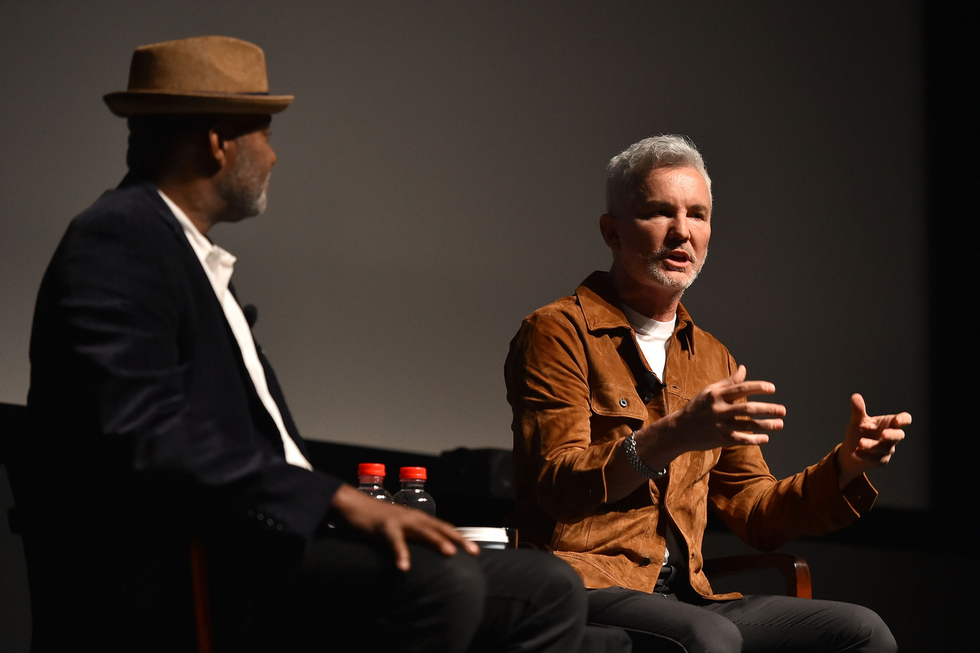 Baz Luhrmann rose to fame with his striking 1996 adaptation of a Shakespearean classic with Romeo+Juliet. Taking several years in between each new film, the Aussie director makes flashy, highly stylized cinema, garnering more acclaim and criticism with each subsequent release, and now he's coming to television with Netflix's The Get Down. The musical drama centers on a group of South Bronx kids growing up in the vibrant yet dangerous New York of the 1970s. The writer and producer of the series is author Nelson George, who for decades has been chronicling various shades of African American culture. George joined Luhrmann on stage yesterday at the School of Visual Arts (SVA) Theater to close out this year's Tribeca Talks: Directors Series.

"It’s Saturday night. You're here with Baz Luhrmann. It's a party!" proclaimed George, who went on to repeatedly emphasize how Luhrmann creates a party environment on his sets. Over the past two years, they’ve been working closely together on The Get Down, and Luhrmann would DJ on the shoots, encouraging his actors. "There is no background in my films," said Luhrmann. "There are no extras. They're all acting." In The Great Gatsby, for example, he wanted everyone to feel as if they could "touch Leo [DiCaprio]," and the atmosphere their presence created contributed significantly to constructing the world of his character, Gatsby.

Luhrmann was never bothered by criticisms that he distorted the original text by F. Scott Fitzgerald. His adaptations are profoundly researched, he said, and "no detail is accidental." For The Great Gatsby, he met with scholars and visited Princeton to lay hands on the original text. He approached Romeo+Juliet by asking, "What kind of film would Shakespeare make today?" The Bard mixed a spectrum of tones, from humor to drama, and often played popular music on stage during his productions. Luhrmann does much of the same, with Romeo+Juliet, for example, being at once romantic and absurd, comical and tragic.

For the director, everything is "play," and he embraces the expressionistic elements of his art. He grew up watching "discarded films," such as The Red Shoes, a masterful piece of theatrical, fantastical, and yet deeply human filmmaking. Straight realism isn’t an option; he celebrates the playful and flamboyant. "You have to surrender" to the world of the film; otherwise, in his eyes, there is no point in watching.

Music, another significant avenue of expression in Luhrmann's films, "always advances the plot or characters' emotional states." "It can cross-fertilize different stories," he said, in reference to how he often uses sound as a narrative bridge to draw parallels between characters or to overlap competing tones. George, who called this approach "musicalization," was curious about Luhrmann's experience working with the legendary Prince, who passed away this week. He's "one of a kind," said Luhrmann, and admired the complex layering of his music. "When Doves Cry" is sung acappella by a choir in the touching, somber marriage sequence of Romeo+Juliet. On his conversion of this "dance track" into a "pure, religious wedding song," Luhrmann said, "You can take something you know and change it," in turn, discovering something new.

Luhrmann's job as a filmmaker is to "do what no one has done." The Get Down is yet another instance of doing "what is unprecedented"; it's the first television series to address the "pre-history of hip-hop." It takes place in 1977, when different music styles (including the deceptively indestructible disco, a "cultural Titanic") co-existed and spoken-word over a beat was emerging as a popular musical form. "No one's interested in the recipe," said Luhrmann; instead, he wanted to show what consisted in making "the cake" (and apparently cakes "appear in every episode," in a metaphor that he admits was taken too far). Luhrmann wanted to learn how a local community could give shape to a global phenomenon.

As an expert in the music of the '70s, George helped perfect the show's design and costume, as well as the character profiles and event details. Luhrmann allows all these moving parts to breathe in freedom. "I think of him as a conductor," said his wife, Catherine Martin, whom he brought on stage, reminding us all, "She has four Oscars" (Moulin Rogue and The Great Gatsby). "As a creative person, I feel that I have a voice in the process," said Martin.

George praised the detailed "map" Luhrmann created of the time and place of the series, the result of intense research but also bringing in authentic voices from the era and its descendants. The acclaimed rapper Nas was a "great creative force" in the project, and other artists, such as the Sugarhill Gang and Grandmaster Flash, who's one of the series' producers, are depicted in the series. "The founding fathers are on the show," said Luhrmann. "Half of the cast of Hamilton" makes an appearance as well, he added.

"I never want to leave a film," exclaimed Luhrmann. "I live it." Intensely immersed in the worlds he creates, he never stops delving into the material. "It's a party," repeated George at the end. The music never stops playing for Luhrmann.

To witness the birth of hip-hop through Luhrmann's eyes and ears, watch The Get Up this August 12, on Netflix.