The Top 5 Cinematic Music Moments in 2013

There was a bounty of great music moments in film this year. Loren Hammonds, the Director of Tribeca Cinemas and TFF Associate Programmer, shares his top 5. 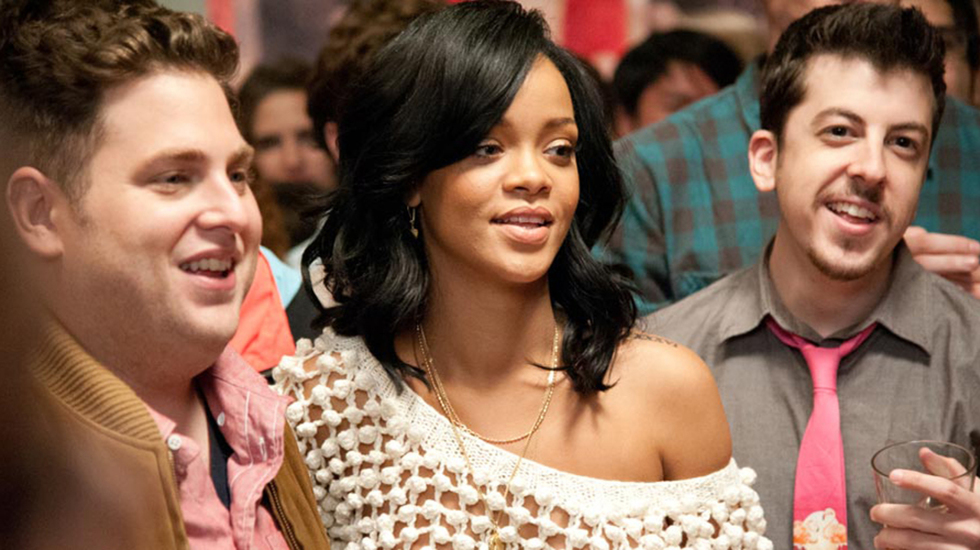 This year has seen some solid films hit theaters across the globe. Both new and established filmmakers managed to introduce indelible images and memorable characters in all sorts of films. However, lacking a major musical with a capital "M" this year (no offense, Frozen and Black Nativity), one had to search in other genres for the strongest melodic moments of the year. Here are the tops, in my humble opinion and in no particular order (except for the Stacy Keach performance. That stays at number 1 no matter what.)

5. Matthew McConaughey in The Wolf of Wall Street

In his approximately 17 minutes of screen time, McConaughey leaves a lasting impression as the first financial mentor to Leonardo DiCaprio's eventually unscrupulous character. His most memorable moment onscreen? Holding court at a cocaine-fueled power lunch opposite Leo, his character offers a performance of an improvised, chest thumping song of indeterminate origin. This primal ditty is intended to inspire his innocent protege to embrace his lust-for-money lifestyle, and Leo falls for it, hook, line, and sinker. Stay through the credits and you'll hear a reprise, with Mcconaughey on vocals, produced by Robbie Robertson of The Band fame.
​
4. Craig Robinson and The Cast of This Is The End

This Evan Goldberg & Seth Rogen project featured a who's-who of young Hollywood living (but mostly dying) in the aftermath of The Rapture. Playing very skewed versions of themselves, the cast (including James Franco, Rogen, Danny McBride, and Jonah Hill) is pitch perfect, masterfully riffing on the concepts of image and celebrity. Craig Robinson (The Office, Pineapple Express) sets up his persona early, performing a soulful set on keyboard and vocals, parked in the middle of James Franco's house as The Apocalypse approaches. His fellow party guests, (including pop-diva Rhianna, comedian Kevin Hart and Franco himself) join him in a rousing call-and-response ditty. The title of the song, somehow appropriately, is "Take Your Panties Off". The Original Motion Picture Soundtrack includes a studio version of the song, featuring none other than Snoop Dogg (the "Snoop Lion" phase is over now, right?)

3. Joaquin Phoenix & Scarlett Johanssen in Her

The romantic leads of the Spike Jonze-helmed Her are unconventional to say the least. One is a sad sack writer, with a talent for falling too deeply into his emotions. The other is a disembodied voice, belonging to a constantly evolving artificially intelligent computer operating system. This near-future meditation on love and human connection succeeds in warming hearts where the average rom-com can't. Late in the film, the two team up to sing an analog-meets-digital duet, and what should be an impossible, cloyingly sweet scene actually works. The soulful performance of Joaquin Phoenix lends a major assist to the believability of it all, as does the sultry voice of Scarlett Johanssen as "Samantha" the girlfriend who isn't a girl at all. The tune that they sing, "The Moon Song," is penned by Karen O (of the Yeah Yeah Yeahs) and hits all the right notes. Can't wait to hear the soundtrack version.

2. Vithaya Pansringarm in Only God Forgives

This bizarre meditation on violence and revenge was Refyn's follow-up to the critically acclaimed Drive (also starring OGF's lead actor Ryan Gosling). While the experimental approach to storytelling was not loved by all, the film is beautifully shot, and boasts some truly remarkable performances. As Chang, an avenging angel of sorts, unknown Thai actor Vithaya Pansringarm stalks across the screen with quiet purpose, proving himself to be a more than worthy adversary for Gosling's damaged protagonist. In two of the best scenes, both following hyper-violent outbursts, Pansringarm performs karaoke ballads to cleanse himself of the madness.

As an elderly father and his beleaguered son, Bruce Dern and Will Forte have gotten a lot of attention for their fantastic work in Alexander Payne's touching road opus. In my opinion, the true revelation comes from a member of the ensemble supporting cast. Criminally overlooked this awards season, veteran actor Stacy Keach turns in a fine performance as the closest thing the movie has to a villain. Greedy and menacing (in a friendly ol' grandpa sort-of-way,) Keach presents a fully fleshed out portrait of this self-proclaimed big fish in a small pond. Midway through the film, Keach delivers a Karaoke rendition of Elvis Presley's urban ballad "In The Ghetto" that is, undeniably, a showstopper. Expertly mixing pathos and humor, writer/director Payne guides him into arguably the most memorable scene in the film. With no damn right to be as transcendently funny as it is, I would support an Oscar campaign on this moment alone.