Home » Tribeca News » Beware THE WITCH: This New, Satan-Approved Horror Classic Will Seriously Mess You Up
View All News

Beware THE WITCH: This New, Satan-Approved Horror Classic Will Seriously Mess You Up

The old boldly meets with the new in filmmaker Robert Eggers' phenomenal and creepy-as-hell look at 17th century religion and witchcraft. Here, Eggers and the film's breakout star Anya Taylor-Joy break down how they made the scariest witch movie in decades below everyone's radars. 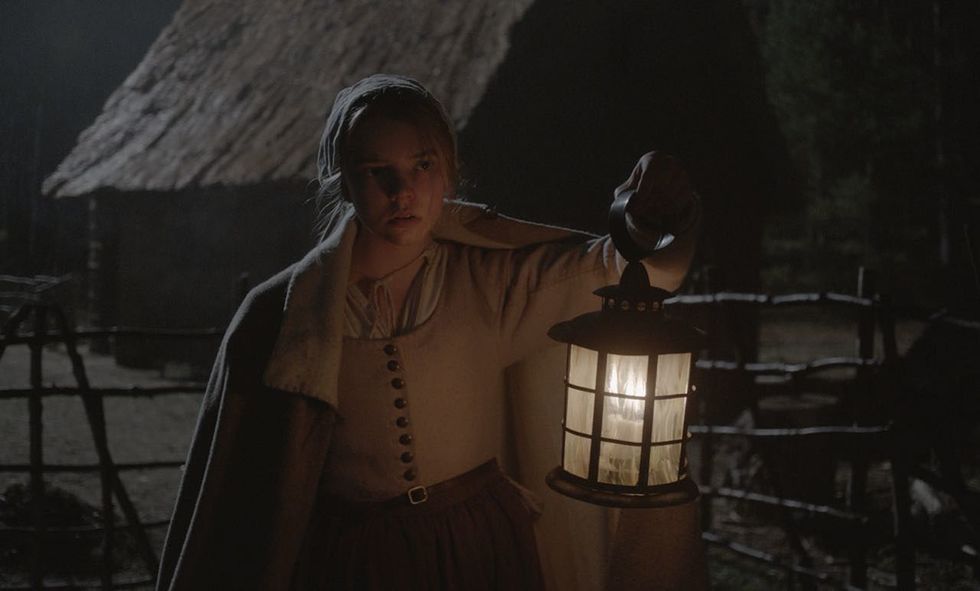 Think of your favorite movies about witches, and then think about how over-the-top they handled their black magic practitioners. It doesn't matter which movie you drudge up, either—they’re all guilty, especially every Disney incarnation of those sorcery-loving old hags. It’s as if witches are immune to subtlety. In Italian horror master Dario Argento’s Suspiria (1977), for instance, they're supercharged with Goblin's lullaby-on-acid score and they off victims in ghoulishly elaborate ways. In lighter fare like Hocus Pocus (1993) and Nicolas Roeg's The Witches (1990), they’re played for cartoonish laughs. And in the 1996 teen-centric The Craft, they're as dolled up as today’s CW stars. The only exception to this rule is the found-footage classic The Blair Witch Project, but that one comes with a catch: You never even see anything resembling a witch.

When conceiving his hugely ambitious feature film debut, The Witch, writer-director Robert Eggers decided to break all of the unwritten rules usually adhered to by filmmakers dabbling in cinematic witchcraft. Unlike Argento, Roeg, and nearly every other director in big-screen witches’ collective past, he toned down the theatrics, and dissimilar to Blair Witch makers Eduardo Sanchez and Daniel Myrick, he opted to show the titular villain frugally. "The trick, for me, when it came to making the witch scary, was using restraint," says Eggers. "So many times in films like this, the supernatural elements are played up with such grandeur that you’re always so aware of how fake it is. I think the supernatural really needs to exist in the shadows for it to retain its power, especially something that’s so familiar and has been put into movies for so many years, like witches. And even when you see the witch, it’s not amplified in any way. It’s straightforward and primal. I just followed my instincts."

Those instincts have paid off handsomely. (Or better yet, for those who’ve been fortunate enough to see Eggers' film, "deliciously.") After quietly entering the 2015 Sundance Film Festival off of everyone’s radars, The Witch has spent the last year building a remarkable amount of buzz and overpowering eager horror fans with anticipation, partially thanks to its widespread critical acclaim and Eggers’ attention-grabbing Best Director Prize win at Sundance, which rarely, if ever, happens to a filmmaker working so unabashedly in the horror genre. Adding to the mystique, none other than the leaders of the Satanic Temple have endorsed Eggers' work, hosting special screenings and post-movie "rituals" around the country this month. Mainly, though, The Witch has been widely hailed as a "new horror classic" because of its striking uniqueness and painstaking details, all of which are doubly impressive when you remember that it’s the work of a first-time director.

Set in 1630 New England, The Witch’s story is limited to one family, the seven members of which are the only people seen on screen for about 99% of the film’s duration. Devoutly religious Puritan husband-and-wife duo William (Ralph Ineson) and Katherine (Kate Dickie) are ousted from their community for challenging their church's doctrine; due to their transgressions, William, Katherine, their teenage daughter Thomason (Anya Taylor-Joy), pre-teen son Caleb (Harvey Scrimshaw), twin rugrats Mercy and Jonas (Ellie Grainger and Lucas Dawson, respectively), and newborn infant Samuel are sent off to live alone in the woods. Once in the isolated forest, their crops rot, leading William and Katherine to desperately plot on selling Thomasin off to a new family. They don't realize, though, she's been eavesdropping on them. Even worse, hovering around the family as they slowly implode is, as Mercy calls her, "the witch of the wood" who's ready to capitalize on the family’s disintegrating faith and contagious mistrust of one another.

Eggers has described The Witch as a "nightmare from the past," or his attempt to transmit the fears of 17th century New England people, whose lives were dominated by faith-based paranoia and subsequent beliefs in the supernatural, directly into viewers’ psyches. And to do that, he paid as much attention to its not inherently frightening parts. As all of the best horror movies do, The Witch earns its emotional devastation and paralytic scariness through its mature characterization. All of its characters feel painfully real; their familial plight is laid out delicately, performed excellently, and, like the best horror, resolved horrifically. The nucleus of The Witch's humanity is Thomasin, hauntingly played with astounding nuance by on-screen rookie Anya Taylor-Joy. The Argentine-Anglo-American actress, who's currently based in London, is a total revelation, and she’s deservedly received just as much adoration as Eggers.

"When I first read The Witch’s script, I said, 'What is this? This is amazing,'" says Taylor-Joy. "I couldn’t quite figure out what it was about it exactly, but it completely took over me. I read it that night and then I had the audition the next day, and I couldn’t understand the deep-seeded fears and anxieties that resonated so much with me after reading the script. I grew up Catholic, so I wasn’t sure if it was the very specific ways that this story gets at your Catholic guilt, perhaps. Or was it the classical language that’s very poetic and beautiful, and that lulls you into a kind of disarmed trance before the horror begins? But then, I also love fairy tales, so was it speaking to me in that way? Ultimately, I think it's a combination of all of that."

For Eggers, Taylor-Joy provides The Witch’s predominantly old-fashioned aesthetics and viewpoints with a crucial modernity. "Anya has a timeless quality," he says. "She’s not like, ‘So, yeah, I’m just a girl wearing an outfit I found at a museum,’” says Eggers, with a laugh. "You believe her as she’s working around the farm and milking goats. But at the same time, she couldn't seem like she's too much of that time, if that makes sense. Thomasin needs to be us—she needs to be audience's surrogate. And with her unique look and her natural presence, Anya feels like she’s from a different time altogether, whether you’re talking The Witch or right now. Thomasin needed that balance. You’re seeing the movie through her eyes. The Puritan culture is as difficult for her as it is for today’s audiences. Even if you’ve grown up Catholic, the kind of extreme English Calvinism that’s seen and felt in the film is hard to wrap your head around."

Amazingly, Eggers spent more than four years wrapping his own head around it. Because he’s a stickler for precision, or, perhaps, because he’s just plain nuts, Eggers approached his wildly audacious first feature with a dedication to spot-on, period-specific accuracy. A Brooklyn resident, Eggers paid his pre-Witch-production bills as a production designer, prop stylist, and set carpenter on various downtown New York stage plays and DIY indie flicks made by friends; that hands-on experience seeped into The Witch's physical look, with Eggers lifting architectural plans straight from vintage journals and even getting his crew to farm the Kiosk, Northern Ontario, Canada, set’s landscape in era-appropriate ways throughout the 26-day shoot.

That granular authenticity trickled into the dialogue, too. The Witch's characters speak in an recognizably olden language that’s authentic to the early 1600s and was pulled directly from the countless diaries, handwritten accounts from historically influential ministers like Cotton Mather and Samuel Willard, and Puritan prayer manuals that Eggers read during his tireless research. Born and raised in Lee, New Hampshire, Eggers’ New England upbringing implanted an interest in Puritanical history and occult-tinged mythology at an early age. "If you've been to rural New England, you can’t help but be surrounded by the past,' he says. "Growing up, I felt like the woods behind my house were haunted; I felt that the witches and pilgrims of days gone bye were haunting those woods."

Most importantly, though, Eggers imbued The Witch’s horror elements with an intentionally dated sense of wonder. As both a fiction lover and a professional storyteller, he’s always been drawn to classical scares; two of his earlier short films were based on the Brothers Grimm's 1812 fairy tale "Hansel and Gretel" and Edgar Allan Poe's 1843 short story "The Tell-Tale Heart." For The Witch, he reached even further back into the genre’s history books by literally scouring through history. Eggers based the movie’s eponymous antagonist on the New England mythologies and folk tales he constantly heard as a kid as well as the Elizabethian witch pamphlets and harrowing pre-Salem-Witch-Trials diary entries he read while nose-deep in research.

By combining those efforts with his aforementioned restraint and lifelong affinity for old-school terror, Eggers has managed a seemingly Herculean feat: He’s made witchy tropes that have been cartoon-ified in this post-Disney world legitimately scary again, everything from cackling hags to Satan-ordered hares and poisoned apples. Eggers doesn’t waste any time in showing that imagery off. Within The Witch's first 10 minutes, Baby Samuel is snatched away by the witch during a traumatic game of peekaboo with Thomasin; without spoiling anything more, let’s just say that poor Samuel’s fate is more than enough to give The Witch its "R" rating, and that his abductor isn’t left a mystery.

It’s a daring move on Eggers’ part, but also one that he felt was necessary. "As older-minded as this movie is, I’m still making it for a modern audience," says Eggers, “and the reality is, most people probably don’t know what a 17th century version of a witch is exactly. By showing ours so quickly, it makes the audience understand the stakes right away, and they can be afraid of her the same ways that people from that time were. Today, people see witches as these cheesy Halloween decorations, which we all laugh at, but I wanted to make sure that we got rid of those preconceptions and modernized views right away. I wanted you to very quickly understand why the people of that time were so terrified of witches."

Now that The Witch is finally opening theatrically, it’s time to see if Eggers' gambles will pay off. There’s no denying that it won’t be an easy road to success, though. Hoping that its Sundance explosion will translate to box office victory, the so-hot-right-now distribution company A24 (home to Oscar nominees Room and Ex Machina) has given Eggers’ unconventional genre picture the kind of wide release that a Paranormal Activity sequel would receive.

That's great news for horror lovers who appreciate seeing top-shelf filmmaking get such a big rollout, but it’s also potentially disastrous. If The Witch, it's anti-popcorn, if not downright art-house. "It’s interesting, genre people who are into movies like Insidious or The Conjuring have watched The Witch and been like, 'Whoa, I don't know what the hell that was, but that was dope!'" says Eggers. “But then there have certainly been people who've been like, 'Wow, that was a fucking boring movie where nothing happens, it isn’t scary enough, and I didn’t throw my popcorn all over my girlfriend’s face. This is bullshit.'"

He continues, "But I’m not a guy who’s working alone for myself. I’m trying to communicate with other human beings about what it means to be a human being, so I’m really honored and happy that a movie like The Witch gets to go to a broad audience. Now all I can do is hope that it connects."

The Witch opens nationwide this Friday, February 19, via A24.