The Best — and Worst — of Celebrities in Video Games 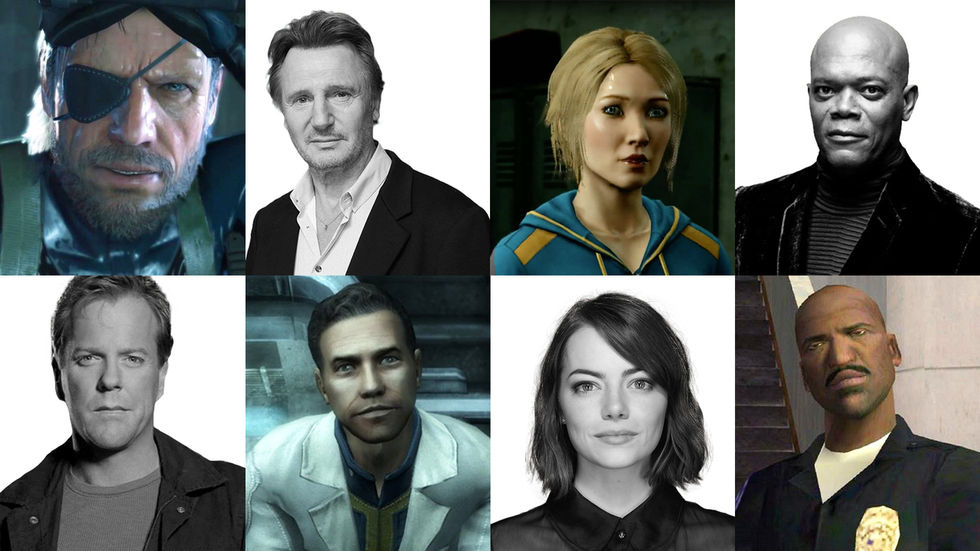 When the trailer for the video game Beyond: Two Souls premiered at the Tribeca Film Festival in 2013, it caught the attention of gaming and movie fans alike. Developer Quantic Dream brought Ellen Page and Willem Dafoe on board for its narrative-driven game, but the Hollywood duo did much more than just read some lines off a script. Both Page and Dafoe underwent heavy motion-capturing in order to get their in-game characters to take on their real-world image. For this reason, Beyond: Two Souls was viewed by some as just as much an interactive movie as it was a video game.

While Beyond: Two Souls served its purpose in getting many non-gamers to think about video games in a different way, those who follow the $111 billion dollar gaming industry know that the title isn't the first time a major Hollywood star has ventured into the world of pixels. There have been quite a few A-list movie and TV stars who have earned an extra paycheck by taking on a role in a video game in recent years. The difference when compared to Page and Dafoe, however, is that most of these celebrities did voice work for an in-game character that looked nothing like them. If you're only a casual gamer, chances are good that you might have recently played through a game starring one of your favorite Hollywood celebrities without realizing it. Here are 12 famous movie and television stars you didn't know were in your favorite video game:

Kiefer Sutherland is perhaps best known for his role as Jack Bauer on FOX's 24, but gamers everywhere will be hearing Kiefer's voice in one of the biggest releases of 2015 when Metal Gear Solid V hits stores this month. MGS V, which is already bringing in stellar reviews from the gaming press, puts Sutherland in the role of "Snake," the main protagonist for the game and one of the most iconic characters in video game history. Sutherland's casting was not without controversy in the video game community, as he replaced much beloved series veteran David Hayter in the role. But early feedback on the game seems to indicate that Sutherland nailed the gig. Perhaps that shouldn't be surprising, considering that this isn't Sutherland's first rodeo as a voice actor in gaming. He also played the part of Sergeant Roebuck in Call of Duty: World at War back in 2008.

Liam Neeson has a reputation for taking on tough guy roles in Hollywood, and his intimidating voice has served him well in that regard. But anyone who's played Bethesda Studios' Fallout 3 knows that the actor can express a wide range of emotion with his voice. Neeson played the role of "James," the father of the game's protagonist. The game's producers said that when they first sat down to write the dramatic part, they were already imagining Neeson in the role. James's in-game model was at least somewhat inspired by Neeson's real life traits.

Actor Seth Green is well-known for his voice acting chops, perhaps most prominently for his role as Chris Griffin on Family Guy. But gaming fans know that Green also provided comedic relief for one of the most popular gaming franchises of the last decade, Mass Effect. Green's character of Jeff Moreau was known for his wit, sarcasm and bravado as he maneuvered the space ship Normandy into and out of trouble.

Emmy-award winning actor Martin Sheen has had a successful career in Hollywood dating back to appearances in Badlands and Apocalypse Now in the 1970s, although he is perhaps best known today for his role as President Josiah Bartlet on The West Wing. But Sheen also took on a powerful role in Mass Effect 2 and Mass Effect 3, playing the role of "The Illusive Man." While initially a supporting character, The Illusive Man eventually became one of the series main antagonists. While Sheen's appearance in Mass Effect is well known among video game fans, one additional role the actor has taken on in gaming that some may not be aware of is his work on popular online game World of Warcraft. Sheen provided the voice of the dragon Nozdormu during WoW's 2010 expansion, Cataclysm.

Samuel L. Jackson has headlined quite a few movies in his long career, and more often than not, he takes on the persona of a bad ass who ends up saving the day. It's this formula that is one of the reason's why Jackson's turn as Frank Tenpenny in Rockstar's Grand Theft Auto: San Andreas was so different. In the game, Jackson plays a corrupt police officer in the fictional Los Santos Police Department who is involved in everything from murder to drug dealing. The player eventually discovers that Jackson's character is the main antagonist of the game. Jackson won a "Best Performance" award for the role at the 2004 Spike Video Game Awards.

Haley Joel Osment rose to fame thanks to M. Night Shyamalan's The Sixth Sense and has since taken on several other high profile roles, including a part in Steven Spielberg's A.I. Artificial Intelligence. But one of Osment's most popular characters to this day remains that of Sora in the Kingdom Hearts series. Kingdom Hearts is a video game franchise that mixes popular Disney worlds with characters from Final Fantasy, a long running and highly successful RPG franchise from Square Enix. In the game, characters take on the role of Sora as he travels to various Disney worlds, like Agrabah from Aladdin and Atlantica from The Little Mermaid. Kingdom Hearts appeals to both children and those still young at heart. The series has also featured a number of other stars in voice acting roles, including Mandy Moore, Hayden Panettiere, and Lance Bass.

Emma Stone has shown that she has quite the range as an actress, appearing in blockbusters like The Amazing Spider-Man, while also nabbing roles in more eclectic films like 2014's Birdman. But Stone also picked up some voice over experience in Square Enix's Sleeping Dogs. Stone plays the role of Amanda Cartwright, a character who goes on a date with the main protagonist. Stone wasn't the only prominent Hollywood actress to have a part in the game, as actress Lucy Liu also lent her voice for the character of Vivienne Lu.

The actor behind Luke Skywalker certainly needs no introduction here, but what some Star Wars fans might not know is that Hamill has had one of the most successful careers in voice acting of any star on this list. Hamill has served as the voice of The Joker from Batman for more than 20 years, lending his pipes to various incarnations of the character across multiple animated series and video games. Hamill, who will be returning to his iconic role as Skywalker in Star Wars Episode VII this December, most recently voiced The Joker in the Arkham series of video games, including this summer's Batman: Arkham Knight.

There are millions of people around the globe who will always see the 34-year-old Elijah Wood as Frodo Baggins from The Lord of the Rings trilogy. That said, Wood has shown he's capable of performing in a wide variety of roles, and that includes a lot of work in voice acting. He provided the voice of the main character in the animated children's films Happy Feet and Happy Feet 2. He's also done work for several animated series with connections to Cartoon Network and Rooster Teeth. That experience helped him transition with ease to two prominent roles in video games. He voiced main character Spyro in the Legend of Spyro trilogy from 2006 to 2008. Most recently, Wood was hand picked by legendary game developer Tim Schafer to serve as the lead for Broken Age, a point and click adventure game from developer Double Fine. The title was a major success on Kickstarter, pulling in more than $3 million in funding from fans.

Christopher Walken is an Academy Award winner who has appeared in more than 100 movies and television shows over the course of his long career. While plenty of those projects were big Hollywood productions like Pulp Fiction, Walken has demonstrated numerous times that he's not afraid to take on different kinds of projects. He's appeared in multiple music videos by popular artists over the years, and back in 2003, he joined the cast of True Crime: Streets of LA, a video game published by Activision. The game was heavily inspired by Grand Theft Auto, but used a star-studded cast that also included Gary Oldman, Michael Madsen and Michelle Rodriguez to set itself apart.

One of the biggest video games to release in 2014 was Destiny, an online shared world first person shooter from Bungie, the developer behind the critically-acclaimed Halo series. It's not hyperbole to say that Destiny was one of the most anticipated games of all-time prior to its release, and a lot of that can be attributed to the massive number of fans that Bungie retained from its Halo days. But adding to the hype was the fact that Bungie had hired Peter Dinklage from Game of Thrones fame to serve as the voice of an artificial intelligence called "Ghost" in the title. As Ghost, Dinklage accompanied the player on his or her adventures through Destiny, often providing commentary and insight as the player progressed through the levels. Unfortunately for Dinklage, his work was not well received in the gaming press upon the title's release, although some players blamed Destiny's scriptwriters more so than the actor himself. It was disclosed in August that Bungie is now actually working to have another voice actor re-record all of Dinklage's lines, Officially, the move is being blamed on the actor's lack of availability for future work on sequels to the game and not on the quality of his original performance.

The actor behind Tyrion Lannister isn't the only Game of Thrones star to dabble in video game voice acting recently, as Charles Dance, known to GoT fans as Tyrion's father Tywin Lannister, recently lent his voice to The Witcher 3, released earlier this year. Dance, of course, is known for a wide variety of powerful roles on both stage and screen, but this was the British actor's first experience with a video game. It's somewhat fitting then that Dance took on the role of Emhyr var Emreis, a powerful emperor within the game's world of Nilfgaard. In a video released by developer CD Projekt Red prior the game's release, Dance said his character has some traits that will be very familiar to anyone who watched his work on HBO: "My character is... a very, very powerful man, probably the most powerful man, and as such he doesn't need to throw his weight around. He's a man of few words, the words he speaks, speak volumes. And he's ruthless. He's ruthless because he has to be."