With “Hara-Kiri: Death of a Samurai” (now on VOD), legendary Japanese filmmaker Takasha Miike brought Cannes into three dimensions. What other auteurs have stepped into the sagittal plane before him? You might be surprised... 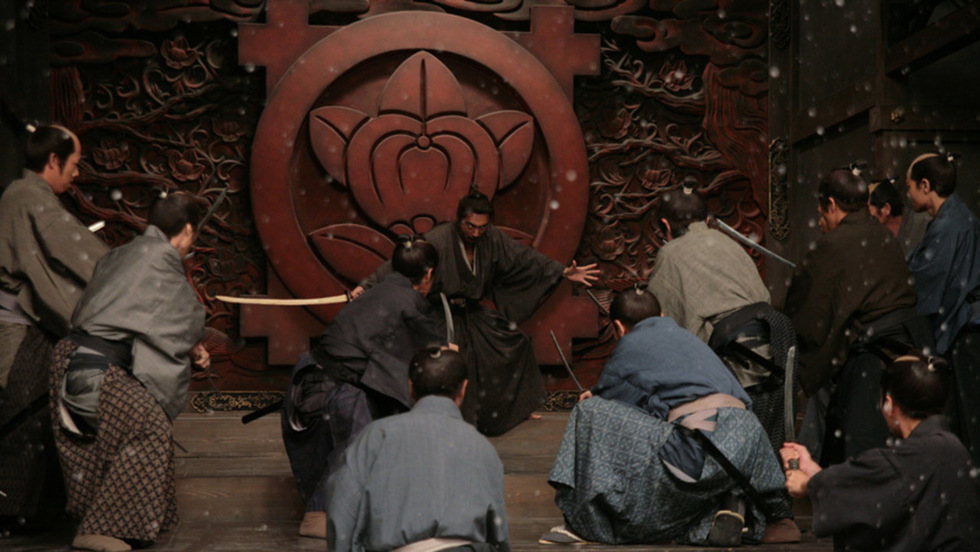 Prolific is a gross understatement when it comes to Japan’s rogue director Takashi Miike. Best known for his traumatically gory films like Ichi the Killer and 13 Assassins, Miike’s latest work, Hara-Kiri: The Death of a Samurai, adds a new dimension to his oeuvre, offering a decidedly reserved period drama about an out of work and down-and-out samurai in 17th century Japan seeking to avenge the unjust death of his son-in-law. With sumptuous visuals and a nuanced performance from scandal-prone leading man Ebizô Ichikowa, the film unfolds with ceremonial grace punctuated by what is perhaps the most sadistically affective, gut-wrenching seppuku scene ever, and a stunningly choreographed epic final fight.

As the director of this, the first 3-D film to screen in competition at Cannes, Miike marks one more in a series of auteurs to traverse the sagittal plane. Given Miike’s reputation for violent excess, his use of the technology is surprisingly subtle, employed to enhance atmosphere rather than amp up shock value. “Japanese spaces are very small,” Mr. Miike said in an interview with The New York Times, “so in my film, you have that space, and a window looking out on a small garden. I felt that was effective, and even that contained garden is very beautiful. My feeling was that 3-D could actually be a weapon to create that sense of contained space. I use depth in my visuals even in 2-D, and found that 3-D is actually liberating.”

With this in mind, we’re re-visiting (and previewing) directors who have used 3-D for the right reasons, refuting the notion that the technology is all gimmick and no creative substance. Glasses on!

Even Alfred Hitchcock had a foray into 3-D with his 1954 Dial M for Murder. Based on Frederick Knott’s widely popular stage play of the same name, the suspense thriller centers on the ostensibly happy couple Margot and Tony Wendice, played by the immaculately lit and softy sibilant Grace Kelly and slimy but suave Ray Milland. The cuckolded Tony hatches a foolproof scheme to murder his cheating wife and inherit her not so small fortune, but the neat plan goes awry when Margot, in a now-famed cinematic struggle, manages to stab her hired killer in the back with a pair of conveniently placed mending scissors. Set almost entirely within the claustrophobic confines of Margot and Tony’s London apartment, Hitch used the third dimension to tease out the mise-en-scene in the limited space, a tactic that proves particularly exhilarating in the scene described above and elevates the Hitchcockian close-up to new heights. Despite being shot in 3-D, the film was mainly exhibited in two dimensions; by the time of its release the technology had fallen out of favor. Dial M has since been screened in its original format and is soon to be released in 3-D Blu-ray. The debate over whether or not Hitchcock actually chose to work in 3-D or was coerced to do so by the studio remains both unsettled and inconsequential, as his masterful employment of the technology proves it’s not just for hacks. The film is worth revisiting in all its triple-planed glory, as critic and champion of auteurism Andrew Sarris noted in The Observer: “The 3-D Dial M is minor Hitchcock; in 3-D, it is major Hitchcock.”

Waiting in the wings after Titanic for technology to catch up with his imagination, box office champ James Cameron outdid himself with Avatar. Still holding steady as the highest-grossing film of all time three years later, Avatar set the bar for 3-D, CGI, and motion capture technology. The plot centers on Jake Sully (Sam Worthington), a wheelchair-bound ex-Marine who finds himself on the imaginary Pandora on a mission to extract the moon’s valuable natural resources. The team of scientists creates Avatars—genetic hybrids between Pandora’s native Na’Vi and humans—to carry out their mission in an atmosphere toxic to humans. What initially may strike as completely unreal—namely, the lanky blue creatures with giant yellow cat-eyes—quickly becomes an all-immersive hyper-reality in shimmering phosphorescence. With Avatar, the medium is quite literally the message: 3-D optics eclipse a narrative that is appropriately all about Jake learning what it really means to see, as viewers’ eyes were opened wide (and perhaps a little strained) to the possibilities of a new medium.

Henry Selick’s Coraline combines stop motion animation with 3-D technology to probe the depths of spooky childhood angst and adventure in the vein of Roald Dahl and Tim Burton. Adapted from the novella of the same name by British author Neil Gaiman, the film’s eponymous protagonist moves with her neglectful parents to a decrepit apartment in Michigan, whose other floors are occupied by a host of eccentric characters. Discovering a secret doorway, the mercurial Coraline disregards danger in favor of escaping her quotidian boredom and loneliness to find herself in a parallel universe: a kind of gothic Oz inhabited by more appealing likenesses of her parents and neighbors, only with buttons for eyes. With James and the Giant Peach and The Nightmare Before Christmas already under his belt, Selick finds in 3-D an ideal companion to stop motion animation—all the better equipped to showcase the psychological and aesthetic depth of the figures of his imagination.

In 2010, German filmmaking heavyweight Werner Herzog used 3-D cameras to make stone walls speak. A lyrical and anthropological guided tour of the Cave of Chauvet-Pont-d’Arc in Southern France, the film offers the rare opportunity to see some of the earliest artwork known to (and otherwise hermetically sealed from) man. The stereoscopic shots place you amidst the bodies of the poetically reverent research crew, enabling vicarious marveling as the beyond ancient images of bison, horses, and woolly mammoths all but stampede across the contoured, cavernous walls. A testament to the ephemerality and permanence of humanity, Cave of Forgotten Dreams pioneered the frontier of the 3-D documentary.

Following in Herzog’s footsteps, Wim Wenders successfully transplants 3-D technology from the action movie to the art film. His viscerally affective eulogy to visionary choreographer Pina Bausch presents an entirely new cross-breed of creative beast. As the trailer aptly asks: “Is it dance? Is it theater? Or is it just life?” The answer is none of the above; Pina warrants a category of aesthetic experience all its own. The 3-D camera places the spectator within packs of leaping, twirling, heaving, and often exhausted dancers' bodies. Despite the director's long-term interest in Bausch’s choreography, before 3-D, the subject simply eluded the medium. In an interview with The New York Times, Wenders commented: “I knew what was wrong with filming dance, period. I just didn’t have the answer yet… even if you use a hand-held camera and are among the dancers, you’re still outside; you need to work in their own element. And I never thought it was space. It just never crossed my mind until I saw one of the first films in 3-D.” Allowing us to inhabit and observe the bodies simultaneously, Pina redefines the term “body genre.”

Predating Wim Wenders’ Pina by a good (almost) sixty years, MGM’s musical go-to guy George Sidney utilized 3-D technology to lift dancing bodies off the screen in his 1953 adaptation of the Tony-award winning musical, Kiss Me Kate. Channeling Shakespeare into crayon-box Technicolor, the film tells the story of a divorced pair of actors (Kathryn Grayson and Howard Keel) brought together again when they’re precariously cast in a musical rendition of The Taming of the Shrew. Life imitates art as the actors’ onstage roles reflect and bleed into their offstage relationships. With a couple of gangsters thrown into the mix for good measure—and an Academy Award-nominated score by none other than Cole Porter—Kiss Me Kate is an early testament to the potentials of a not-yet-perfected medium. Particularly enjoyable is the scantily and fringe-clad Ann Miller flinging various personal accoutrements at the camera as she sings “It’s Too Darn Hot.”

With Hugo, the director of Taxi Driver, Raging Bull, and Goodfellas makes an unlikely phantasmagorical departure from gangsters and hit men. An adaptation of Brian Selznick’s children’s book, The Invention of Hugo Cabret, the film is at its essence a celebration of movies themselves. 3-D provides just the ticket to re-kindle some of the original turn-of-the-century magic—after all, as the film reminds us, that’s precisely what the cinema originally was: a sideshow optical illusion meant to dazzle the eye of the beholder. The film follows a young orphan, Hugo (Asa Butterfield) who lives amidst the kinetic cogs and sprockets of the clock tower in Paris’ central train station. A mission to fix the broken automaton his father salvaged from a museum before his death leads the blue-eyed boy to none other than magician cum cinematic forefather Georges Méliès (played to mustached perfection by the always dignified Sir Ben Kingsley). The viewer is granted a highly rewarding refresher on early film history, brought to life through Scorsese’s immaculately and imaginatively rendered 1930s Paris. Replete with visual homages to the Lumière Brothers and Harold Lloyd, Hugo reminds us that the cinema is quite literally where dreams are made.

Director Baz Lurhmann raised more than a few eyebrows when he confirmed that his adaptation of F. Scott Fitzgerald’s canonical and beloved novel would be shot in 3-D. With more than six months to go before the film opens, consider your computer a ring-side seat to the vociferous debate already unfolding between optimists and skeptics, purists and progressives, as they pontificate and proselytize based on the trailer alone. Lurhmann’s films are always palpably kinetic, masterfully scored, and bursting with stylistic excess. Adding a third dimension to this toolbox, if nothing else, promises a dizzying visual affair heavily lubricated with Champagne and gin—and, of course, that famously yellow car speeding down tree-lined country roads and navigating the city lights of a carefully crafted CG replica of 1920s Manhattan. The trailer certainly embodies "restlessness approaching hysteria" both cinematically and thematically; whether or not the film does the same, Luhrmann will be testing out new stereoscopic territory with this dramatic literary adaptation.

With Ridley Scott’s highly anticipated Prometheus polarizing-upon-arrival last month, the question still lingers: when does 3-D enhance the cinematic experience and when is it merely an unwelcome and unecessary headache?

Perhaps this question will be answered by some upcoming projects from revered directors who are slowly jumping on the 3-D bandwagon. Of particular note are Peter Jackson’s The Hobbit: An Unexpected Journey, Ang Lee’s  Life of Pi (get ready to be violently smacked in the face by a school of flying fish), and Jean Luc Godard’s (yes, Godard) Goodbye to Language.

The adoption of 3-D by the now 81-year-old French New Wave iconoclast may seem like a far too late sellout, but it’s just the opposite. As the director commented in a interview with The New Yorker: “I always like it when new techniques are introduced. Because it doesn’t have any rules yet. And one can do everything.”

Hara-Kiri: Death of a Samurai is now available on VOD. For the full 3-D experience, see it in on the big screen starting Friday, July 20, at IFC Center.