Elizabeth Wood's directorial debut, which has been making noise at the Sundance Film Festival, crosses the intersections of white privilege, power dynamics, and a love story with few apologies. 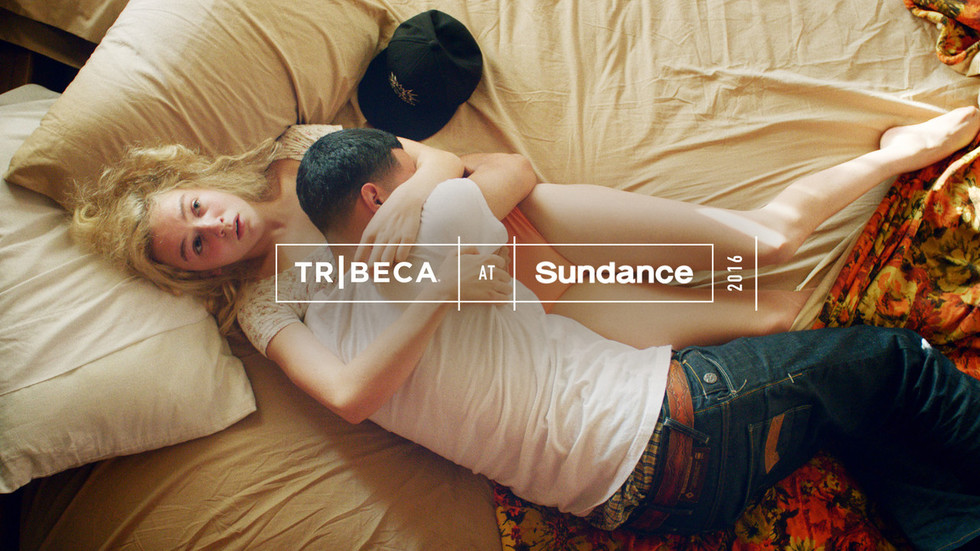 For rising college sophomore Leah (Morgan Saylor), the lead character in first-time director Elizabeth Wood's White Girl, her first summer in New York City is supposed to be focused on her internship and hanging out with friends. Instead, she falls in love with her local drug dealer, Blue (Brian 'Sene' Marc), learns how to deal drugs, and spirals out of control from addiction. White Girl is based on Wood's own experiences, giving the somewhat confessional drama, which premiered at this year’s Sundance Film Festival, a visceral edge.

One of White Girl's most striking elements is its predominantly Latino cast. Although Blue and his friends are drug dealers, they’re not broad-stroke stereotypes. Blue is sensitive, confessing that he gets his name from his ever-present sadness. The suave Kilo (Anthony Ramos) approaches Leah's teacher roommate with enough confidence to win her over. Nene (Ralph Rodriguez) is the joker of the crew, rounding out the guys who've found girlfriends among their gentrified neighbors. The last Latino character introduced is Lloyd, Blue's unhinged supplier; he’s played by the instantly recognizable by face, though not necessarily by name, character actor Adrian Martinez. "I pick my stereotypes carefully, so if it serves the story and the story says something very meaningful, then I think it's okay," says Martinez. "If it was just a bunch of drug dealers shooting at each other, I'm not interested."

If Martinez looks familiar to you, that’s because you've probably seen him in one of his countless Hollywood movies. In American Hustle, Martinez shared screen time with Jennifer Lawrence and Christian Bale; in last year's raunchy comedy Sisters, he got rowdy with Tina Fey and Amy Poehler; and in Focus, he co-starred alongside Will Smith and Margot Robbie.

White Girl, however, finds Martinez in a much darker space. Once Blue is caught, Lloyd physically intimidates Leah to pay him back, a scene in which Martinez insists he played for laughs. "I don’t usually do those kinds of roles," he says. "I felt like it would be a good role to do. Having to be a bad guy with Morgan was like kicking a bunny. It was very hard to be her bully." Although the kids are guilty of peddling drugs at clubs, it's made very clear in White Girl that the Latino men are under constant surveillance. At one point, Leah asks why they can't sell drugs in clubs in Manhattan, and their honest answer is that they aren’t welcome there. Safe in Queens, but without the white privilege to travel unbothered in Manhattan, their experience varies greatly from hers. Incidentally, Leah and her roommate partake in heavier drugs than the guys, but they are never stopped or questioned, even when their behavior is out of control.

White Girl also explores its racially conscious subject matter in terms of the justice system. Saddled by a lackluster lawyer and three strikes on his record, Blue is almost assured 20 years in prison due to minimum sentencing laws, which studies show affect black and brown offenders more than white. Leah thinks there’s something she can do about it, since she hasn't run into the same roadblocks as Blue. It'll come as no surprise, though, that lawyers are very expensive and can take advantage of the situation.

The film's personal angle, the clever ways in which the script handles systemic violence, and the love story at the heart of it all worked magic on Sundance crowds, according to Martinez. "You can tell by how much people are interested in your movie by how many stay for your Q&A," says the actor, recalling White Girl’s world premiere last Saturday night. "The vast majority stayed." Martinez adds that film will likely connect with audiences his co-stars’ ages and younger. "I think it will have a profound effect on young people who are trying to find themselves and are losing their minds."