Opening this weekend at Cinema Village in NYC, ‘Stand Clear of the Closing Doors’ explores autism and its effects on one family during a natural disaster. 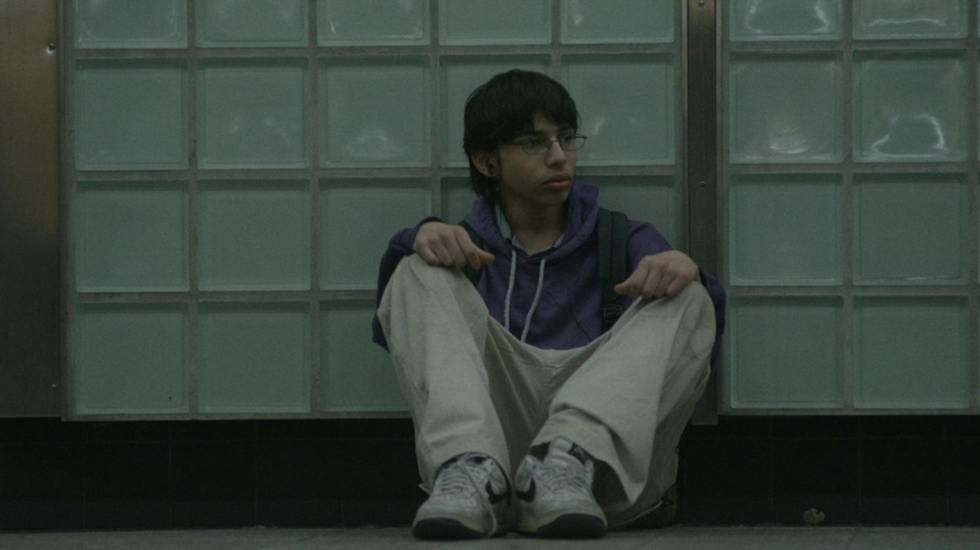 Note: This interview took place during the 2013 Tribeca Film Festival.

Filmed in the far Rockaways during Hurricane Sandy, Stand Clear of The Closing Doors is a quintessential New York film. Picked by Oscilloscope Labatories after its world premiere at the 2013 Tribeca Film Festival, Stand Clear received a Special Jury Mention for The Founders Award for Best Narrative Feature at the awards ceremony.

Co-written by Rose Litchter-Mark and Micah Bloomberg and directed by Sam Fleischner, the film follows Ricky, a 13-year-old boy with Asperger’s Syndrome, who has trouble fitting in with the kids in the neighborhood. As his mother, Mariana, struggles to make ends meet, Ricky finds solace in riding the subways until he gets lost one day. As Mariana and his family search frantically for him, Ricky unwittingly undertakes an underground odyssey among the city’s disparate travellers.

During last year’s Festival, we got to chat briefly with Sam Fleischner about casting the film, his Kickstarter campaign and the perils of shooting in the NY subway system.

Tribeca: Tell us a little about Stand Clear of the Closing Doors. What inspired you to tell this story?

Sam Fleischner: I usually start my process of storytelling with place. Rockaway Beach and the New York subway are two environments that I was eager to explore through the perspectives of an immigrant mother and a child on the autism spectrum.

Tribeca: The film was incredibly naturalistic in both the look and overall feel. Can you talk about your collaborative process with writers Rose Lichter-Marck and Micah Bloomberg? How did you work together to create the dual narrative that moves between Ricky, who’s lost on the subway, and Mariela, who is desperately searching for him?

SF: There was a lot of back and forth during this writing experience. I outlined the story; Rose flushed it out into prose. I put it into script format, and then it was continually passed between us and crafted for almost two years. Finally, we brought on Micah Bloomberg to help with the dialogue to fully form our characters on the page.

There were a lot of happy accidents that came from the chaos.

Tribeca: As someone who has an autistic brother, Stand Clear of the Closing Doors really struck a nerve with me. How much research into the spectrum did you do? Even more, how did you help prepare Jesus Sanchez to act on-camera? How did you find him?

SF: I have had a lot of deep, chance encounters with people on the spectrum. When I was writing the movie, I sat in on some middle-school special ed classes which was a great way to observe the diverse behavior patterns. Jesus is also on the spectrum, which was important for me going into the casting process. My casting director, Eleonore Hendricks, found him through an Aspergers blog.

Tribeca: I thought Andrea Suarez, who played Mariela, gave a tremendous performance as a mother who must cope with the demands of having an autistic child, often at the cost of strained relationships with her husband and daughter. What was the audition process like?  How did she approach the role?

SF: It’s pretty amazing because I met Andrea on the street outside of Prospect Park. She was with her son Max, and I started to talk to her because she just looked like the Mariana that I had imagined. It turned out she came to New York from Mexico 7 years earlier to be an actor. After she read some of the scenes, I offered her the part. It was meant to be.

Tribeca: The climax of the film takes place during Hurricane Sandy. How did you shoot around this natural disaster? What made you want to incorporate it into your film?

SF: Sometimes there is mimesis between what you create and the process of creating it. In this case we were in the middle/end of our production when the storm came. Living right next to the ocean, I had a natural inclination to record what I could. We had to break from shooting for a few weeks while we recovered, and during that time I realized how the storm fit into the story. I also didn’t really have a choice.

Tribeca: Most of the film is shot on the New York subway system. Were there permits or other permissions that you had to secure? How did the unpredictability of the subway system and its riders affect your shooting schedule?

SF: You actually don’t need permits to shoot on the subway, as long as you are “handheld.” There were a lot of happy accidents that came from the chaos, but overall it is a very unforgiving environment for shooting a narrative film. I don’t think I could have picked a place with more variables than the subway.

Sometimes there is mimesis between what you create and the process of creating it.

Tribeca: Stand Clear of the Closing Doors was completed, thanks in part to the aid of a successful Kickstarter campaign. Do you have advice for filmmakers who might consider using the site for fundraising?

SF: As unpleasant as it can be, I think it’s important to take the extra time and send personal e-mails to people.

Stand Clear opens this Friday at Cinema Village in NYC.