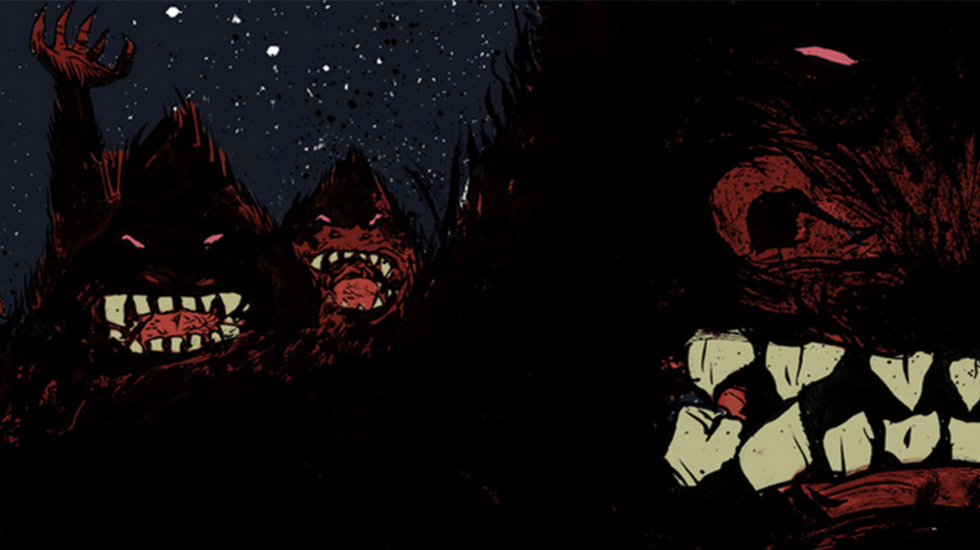 Sridhar Reddy has always wanted to be a filmmaker, and with two feature films under his belt, he was the perfect choice to serve as co-writer/director with the legendary Paul Pope who was stepping behind the camera for the first time to make the short film 7X6X2. The two had spent time together working on a big screen adaptation of Pope’s groundbreaking graphic novel The One Trick Rip Off, so their comfort level was already established. Thanks to a partnership between Tribeca Digital Studios and Sony, Reddy and Pope were given exclusive access to the Sony F55 camera prototype, and they made the most of the opportunity.

7X6X2 tells the story of a lone serviceman who is sent to a distant planet to repair a terraforming robot located in a barren desert. When his position is threatened by 7 fearsome rock creatures, the serviceman must protect a young surveyor who is unaware of the danger that lurks in the darkness.

We got to chat with Sridhar Reddy about his diverse educational background, the advice he’d give to aspiring filmmakers, and his collaborative process.

Tribeca: I read your bio on your website and I noticed that, in addition to film, you have a background in marketing, finance, biology, and anthropology. What initially drew you to filmmaking?

Sridhar Reddy: I was that kid in high school who wanted to make a movie instead of writing a book report [laughs]. So I thought to myself, “I could make a career out of this!” I was a triple major when I was an undergrad and took a film class pass/fail. Stan Brakhage [the famous experimental filmmaker] was my professor, and he didn’t let us touch a camera for almost a year. He really liked us to play with celluloid—we painted it, scratched it, exposed to the elements and what not. It was a really cool way to think about the moving image. He became a great friend.

I didn’t pursue film professionally until I was working in England. I had a “come to Jesus” moment and realized I should be doing the thing I have loved ever since I was a kid. So I made a complete and total 180-degree career shift. When I got into NYU, the professor took one look at my resume and told me that I had way too much education and that I needed to go out and make a movie. So I left school and did just that.  It was great advice, and I’ve been plugging away ever since.

Every aspiring filmmaker should strive to be a well-rounded person in addition to becoming an artist.

Tribeca: Do you find that your knowledge in other areas impacts your filmmaking?

SR: Absolutely. I’m a second-generation scientist, and the scientific method gives structure to the way I think [laughs]. When it comes to producing or writing a script, I use that same technique essentially. I take one nascent idea and break it up into individual pieces and put it back together to form something new.

Parents still ask me if their kids should go to film school. More times than not, I tell them “no.” I would advise aspiring filmmakers that if they have to study filmmaking, they should make it their double degree or minor. They need to learn about things other than film to develop their own worldview. Every aspiring filmmaker should strive to be a well-rounded person in addition to becoming an artist.

Tribeca: You’ve made two feature films before you worked on 7X6X2. Why do you think short filmmaking is important?

SR: It’s an exercise in compressed storytelling. Short filmmaking is essential to learning about the filmmaking process. It makes you tell the most interesting story you can in the least amount of time possible. 7X6X2 was a unique experience because it was getting a 10-12 minute story from this expansive universe that’s thousands of pages deep. We were forced to hone in on what is the most important thing we needed to say and what could be left aside.

Short films really compel you to think with a story editor’s mind, and it is important to remain in that mindset as you transition from short to feature filmmaking.  Short film is basically an incubator where you can experiment. You don’t have to mortgage your house to go make something that people will notice.

Tribeca: When were you first introduced to the works of Paul Pope, what qualities of his comics made you want to work with him?

SR: I love comics. I’ve been reading comics since I was a kid, and I vividly remember reading Paul’s THB. When you see his work, you immediately notice his artistic style, and he completely stands out from everything and everyone. He’s immersed in the world of science fiction. It’s beyond superheroes. I’ve always loved his stuff. When I started making some money in the movie business, I had the opportunity to write another story.  I wanted to option of one of Paul’s books called The One Trick Rip Off.

I met up with Paul in Brooklyn. He had many other offers, but I convinced him to have lunch with me so I could tell him my ideas for a film adaptation. A two hour lunch turned into nine hours of hanging out, and he gave me the book. He really trusted me with the property, and he’s always batted for me when I needed him.  We have not only a professional relationship but  also a genuine friendship.

We did something unfathomable for a film: we made it essentially in the dark.

Tribeca: Can you talk about the impetus for bringing 7X6X2 to the screen? How did Paul approach you to co-direct it?

SR: Paul had never directed before. I think he wanted someone that he trusted to guide him through and show him the basics of what filmmaking is all about. We started talking about 7X6X2, and the story really started to blossom. We’ve got a mutual love of not only science-fiction, but of the western genre. I think Once Upon A Time In The West has managed to find a way into every conversation I’ve had with him [laughs]. This short film is also a birthday gift to his mom, in a way. So there was a strong sentiment behind the project. We worked together to really make sure it was authentic and true to what he wanted.

Tribeca: You also got to work with the F55 Sony prototype. How did you and your cinematographer, Jesse Green, utilize the new camera?

SR: The camera is just awesome. It was an interesting experience for me because Stan Brakhage was all about celluloid.  He was very wary of digital cinema. [laughs] I remember we went out to the Sony lot with the F55 camera to test the light sensitivity. We were able to illuminate a natural state completely—the low lighting shooting capabilities are just amazing. We did something unfathomable for a film: we made it essentially in the dark.

Most of our locations were out in the desert in remote locations. We just had a very minimal light kit, which meant our main light was fire. We used a total of two or three lights to highlight the mountains in the back or small “creatured" states. We didn’t have a generator; we had 3 ID panels. That was pretty much it. Plus, the camera wasn’t large enough to distract or intrude on our actors’ performances. Without some giant camera hanging over them, they were really about to get into the moment. It allowed us to be somewhat invisible.

Tribeca: I thought Joseph Aviel was really, really good as Bryce, the lone repairman. Can you talk about the casting process and finding him?

SR: It was a non-union project so we couldn’t go the mainstream route with our casting process. Joe turned up and just made an impression on us. He used to be a body builder for Arnold Schwarzenegger but never really had a true acting experience.

When I run auditions, I don’t like to make people read the lines. I think it’s unfair to the actor. I like to sit and talk about their life experiences and what they can bring to the character that’s not already on the page. Paul and I were fascinated by his stories—including the time he had a machine gun pointed at his face in  Eastern Albania [laughs]. Joseph also is a devoted family man so there were just so many layers to draw upon for the character.

Short film is basically an incubator where you can experiment. You don’t have to mortgage your house to go make something that people will notice.

Tribeca: What’s the most surprising thing you’ve learned together through the post production process?

SR: Just how brutal it is [laughs]. Our initial cut was 17 or 18 minutes. We had to cut it down to 12 minutes. We had some great scenes and just some beautiful shots that we just couldn’t keep. Brevity is the key. It was hard for Paul because he comes from the comic world where you can really work without time restraint. You can tell your story in however many pages you’d like!

We were really disappointed to lose some great scenes with Bryce’s mother. There was originally more discussion of her special ability and connection with Bryce. However, by leaving out those scenes, we built a mystery that audiences have to figure out for themselves. Audiences are so savvy nowadays. Our sound designer Chris Stangroom is incredible. He built up all these amazing sounds to give that magical, shining feeling, so what you didn’t see, you actually heard. You learn to take away in one area and then you can put it back through other facets of post, which is fine.

Tribeca: So are you and Paul still working on the One Trick Rip Off for the big screen?

SR: Yes! We’re getting really close.  We decided to stay predominately independent. Of course, that can always change. However, Paul has trusted me to tell the story in a way that seems right to him. So I’m staying true to my vision If it takes me 10 years to make the film the way we want it, that’s my commitment to him. It’s not just based on the book. Paul gave me a lot of leverage to insert other content.. It’s kind of our tribute to Blade Runner with some Nicolas Roeg thrown in for good measure. We’re getting close. Right now, we’re set to start shooting next September.