Seriously, Give Lisa Kudrow the Emmy

An earnest plea to Emmy voters, on behalf of TV's single greatest performance. 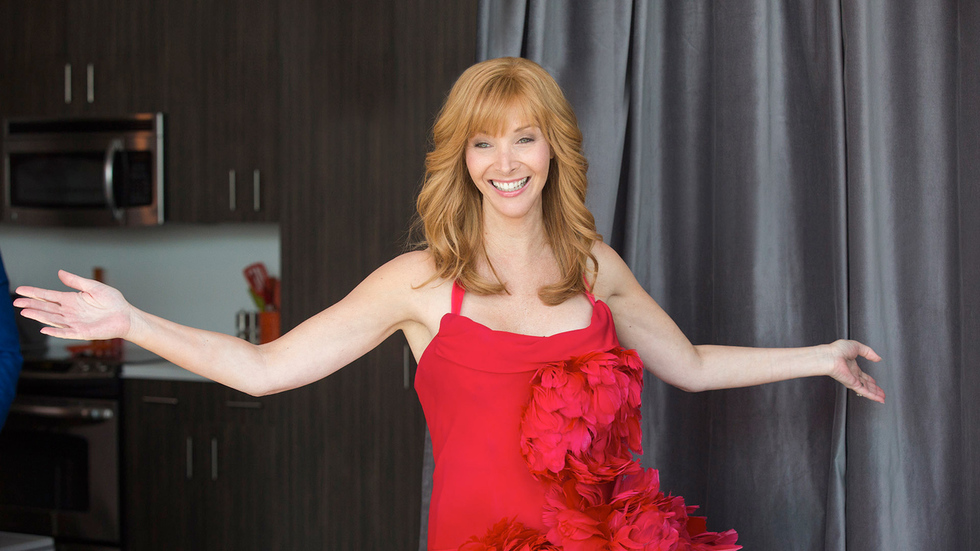 As final voting opens this coming Monday for the 2015 Emmy Awards, two things should be immediately clear. Firstly, it is indeed truly an incredible time for women in television and especially women in comedy, as evidenced by that sterling roster of six nominated for Outstanding Lead Actress in a Comedy Series, a category that has seldom been stronger than it is this year.

Edie Falco may still insist Nurse Jackie isn’t a comedy but she was a typical marvel in the show’s final season, rejecting any false, late-breaking moralism and valiantly refusing to soften her self-destructive addict in her final moments. Perennial winner Julia Louis-Dreyfus will probably win her sixth Emmy for Veep’s fourth season, a pattern that’d only be tiresome if TV’s reigning comic queen wasn’t putting the final word in abrasively electrifying political satirization. Amy Poehler closed out Parks and Recreation’s final season as a usual fount of unbridled comedic joy, solidifying her manic, mettlesome Leslie Knope as one of TV’s all-time greatest heroines. Amy Schumer reached ecstatic new heights of disruptive feminist commentary and audaciously raised her own game as full-bodied comedienne on Inside Amy Schumer’s terrific third season. And Lily Tomlin is still the rubber-faced dowager empress of offbeat characterization; she’s as spryly and wryly sensational as she’s always been as Grace and Frankie’s greying, garrulous free spirit.

These five women are phenomenal talents and that's even excluding the stupendously strong list of women who didn't get a nomination, including Jane the Virgin's Gina Rodriguez, Unbreakable Kimmy Schmidt's Ellie Kemper, Fresh Off the Boat's Constance Wu, Broad City's Ilana Glazer and Abbi Jacobson, and Getting On's Alex Borstein and Laurie Metcalf. Each of these women would be an infinitely worthy Emmy winner in any year — except this one. Because, when it comes down to it, Lisa Kudrow deserves that prize more than all of them.

On the long-delayed second season of her magnificently incisive HBO mockumentary The Comeback, Kudrow reprises her role as Valerie Cherish, a high-strung, C-listed former sitcom star of the nineties still gunning for another go in the spotlight. I think many of us were giddy enough about The Comeback’s surprising, impossible revival following its infamous 2006 cancellation that we would have likely accepted anything the show handed us, even if it was just B-roll of Kudrow sitting in her trailer. Thankfully, Kudrow and co-creator/writer Michael Patrick King (Sex and the City, 2 Broke Girls) had larger designs in mind and instead delivered a Comeback that was emotionally ambitious, thematically trenchant, soberingly insightful, and gaspingly hysterical, oftentimes all at once. These daringly lofty goals never cohere more impressively than in Kudrow’s star performance, which anxiously, audaciously dangles along a precipitously thin tragicomic tightrope before leaping over to the other side, swiftly and smoothly landing on her own two feet.

This season put Valerie through the wringer, both personally and professionally, but it also gave our delusional diva her first taste of critical and audience adulation. After years of infomercials, Valerie lands a supporting role on an HBO drama that fictionalizes her difficult experiences on Room and Bored, the shitty network sitcom that was the centerpiece project of The Comeback’s first season. She’s forced to work with her nemesis Paulie G. (Lance Barber), Room and Bored’s co-creator and a recovering addict whose autobiographical HBO series casts Valerie as a shrewish caricature of herself. She attempts to combat Hollywood sexism and gets saved from onscreen degradation by co-star Seth Rogen. She watches as her marriage to Mark (Damian Young) crumbles despite her miserably misguided attempts at good wifeliness and tries to ignore the declining health of her longtime makeup artist and loyal confidante Mickey (Robert Michael Morris). But she also proves her chops as an actress, gets nominated for an Emmy, and rediscovers what really matters in her life during a climactic sequence that’s much too touching to spoil. Plus, as in the first season, this is all being closely filmed for a coinciding reality show.

Many an able performer would buckle under the weight of such a rigorous acting exercise and arduous genre experiment. But Kudrow has long been one of our most astute, adaptable, and shamefully underutilized actresses since as early as her cutting, scene-stealing supporting turn in 1998’s The Opposite of Sex. “Smelly Cat” will forever waft over her career, as it certainly deserves to. But Valerie Cherish, with her loud, elastic wail, goosey expressions, and priceless retinue of herky-jerky gestures, is already an iconic character who can stand vividly apart from her endearingly kooky Friends legacy. Phoebe Buffay may be the role that begins the retrospective career reels but that doesn't mean Valerie is a minor feat by comparison. Kudrow’s performance is all the more commendable for sticking so determinedly to Valerie’s difficult womanhood, rebuking approachable likability or easy sentimentality in the service of riveting and revealing discomfort, which is frequently humorous but just as often thornily, teeth-clenchingly not.

Like Falco, her comrade in a long line of tenacious, tough-minded antiheroines, Kudrow isn’t concerned with making her character more palatable for wider audience consumption, but with the added challenge of playing such an inherently and exasperatingly outsized figure. Kudrow offers just as fiercely lived-in a parody as Louis-Dreyfus’ dazzling D.C. dummy Selina Meyer, but without the aid of any decisively barbed one-liners or precise punchlines. She flawlessly deepens a vaguely absurd character with delicious detail like Poehler does with Leslie and Tomlin, Kudrow’s offbeat ancestress, does with Frankie, but without any accessibly spunky cheeriness or pleasing quirkiness. And Kudrow comes closer than even Schumer does in brutally plumbing and brilliantly re-packaging the critically whittling effects of industry misogyny with laser-like impeccability, both onscreen and off.

Variety critic Guy Lodge has referred to Kudrow’s work on The Comeback's first season as “the WOMAN UNDER THE INFLUENCE of sitcom performances," a comparison that takes on added resonance in season two as Kudrow continues to dig deeper into Valerie and her innumerable idiosyncrasies. This may understandably sound like hyperbole to those haven’t seen The Comeback, but to those who have, it makes uniquely perfect sense. Valerie Cherish is like Woman's disquietingly desperate housewife Mabel Longhetti — or, a bit closer to context, Opening Night's dissolving stage doyenne Myrtle Gordon — as written and directed by Norman Lear. And like those characters' incomparable interpreter, Gena Rowlands, Kudrow frequently skirts the obvious in favor of reckless emotionality and nervy, steadfast character immersion, keeping her audience simultaneously on edge and in her thrall, enabling us to be maddened, moved, and devastated by Valerie. Even though, in a very Rowlands-like way, Valerie is often too caught inside her own head to fully connect or concern herself with others outside her immediate orbit, Kudrow nonetheless manages to achieve and maintain terrifically particularized chemistry with each and every co-star, but especially Morris' poignantly ailing yet endlessly accommodating Mickey.

If you’re in tears by the end of The Comeback’s triumphant second season — and, indeed, I was blubbering — that's due, in no small part, to the stellar, stirring, yet mildly eccentric scripting of King, who's never pushed his characters so hard and with such affecting rewards. But it’s, unquestionably, the deeply layered feeling and creative character specificity of Kudrow that really sends this entire televisual enterprise to an otherworldly realm of profound and peerless comic performance, earning your cries and cackles with equal and astonishing measure. If The Comeback was a movie, award voters would surely be sending Kudrow on a Cate Blanchett-like march across podium after podium.

Kudrow’s performance is that remarkable: a galvanizing creation of uncommon eloquence and wild uproariousness that's a masterpiece, a master class, and one of the bravest performances seen on any screen in the past decade. It’s a wonder it was allowed to exist at all, but it’s also a miracle unto itself.