Ruth Negga's Artful Restraint is the Real Triumph of LOVING

The actress might not win the Oscar this Sunday, but her performance in LOVING is closer to The Academy's history than some might realize. 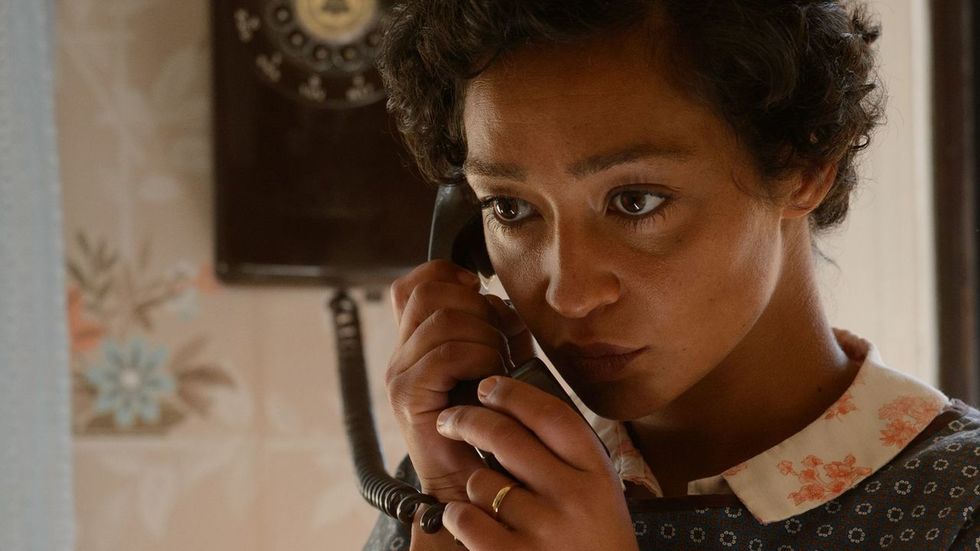 This past June, Variety film critic Owen Gleiberman took a stand against nothing short of Renée Zellweger’s face, criticizing the actress’ dramatically-altered appearance and asking the not-entirely-unwarranted query of whether or not a changed face automatically renders one a different performer.

One of the more intriguing responses to Gleiberman’s arguably well-intentioned but grossly-executed editorial emerged in a Twitter thread initiated by Melissa Silverstein, founder and publisher of the website Women and Hollywood. “I don’t think it is any of our business to talk about women’s bodies,” tweeted Silverstein. “It’s just not ok. Talk about her acting. Not her face.”

Silverstein makes a valid point, one often reiterated in discussions about Hollywood’s complicated practice of cosmetic surgery. But to shift away from the nip and tuck conversation, there is a glaring incongruity in Silverstein’s statement and its insistence that conversations about acting should somehow remain separate from conversations about an actress’ body, specifically when it concerns her visage.

Directors have, of course, been lingering on the female face for more than a century, which makes Silverstein’s suggestion all the more puzzling. Indeed, how can one talk about the performances of Renée Falconetti in The Passion of Joan of Arc, Louise Brooks in Pandora’s Box, Giulietta Masina in Nights of Cabiria, Bibi Andersson and Liv Ullmann in Persona, Cicely Tyson in Sounder, Whoopi Goldberg in The Color Purple, Maggie Cheung in In the Mood for Love, Nicole Kidman in Birth, or Laura Dern in Inland Empire, among countless others, without directly addressing the ways in which each actress uses her facial features to communicate myriad facets of her character? How, then, is one of to discuss the unusual power of Ruth Negga’s magnificent, flesh-and-blood characterization in Jeff Nichols’ social/marital drama Loving?

In the film, real-life Virginia couple and reluctant heroes Richard (Joel Edgerton) and Mildred Loving (Negga) battle criminal charges and the overarching prejudice of their times to solidify interracial marriage as the law of the land. As Mildred, Negga has earned what many consider a surprise Academy Award nomination for Best Actress, despite a steady, months-long awards campaign that had been in the works since the film premiered at this past year’s Cannes Film Festival. In the weeks since the nominations, Negga has been treated like something of an also-ran as Emma Stone rides the unstoppable La La Land locomotive to victory, despite some considerable competition from Elle’s mighty Isabelle Huppert. This is a shame because Negga deserves her spot and the full consideration of Oscar voters as much as any leading lady this year. Much like Loving, Negga’s breakthrough performance is an achievement of elegant understatement, downplaying dramatic revelations and tempering personal triumphs so as to distinguish itself from heavier-handed pictures of its time-honored genre. But Negga’s physical characterization, more than any other recognized within this year’s Best Actress field, harkens back to a style of screen acting that was partly pioneered, at least within the annals of the Academy, by none other than Janet Gaynor, who won the first-ever Best Actress Oscar for her trio of performances in Seventh Heaven, Street Angel, and Sunrise, the first and last time such a feat would be allowed.

There are many factors that announced cinema as an innovative and gripping art form during its nascent eras, most notably the ability of moviemakers to record both the fine-grained realism of everyday life and the grandeur of invented adventures. Just as seminal, however, was the medium’s intimate and at times uncanny capacity for capturing the face’s full mobility. One need look no further than Gaynor, an actress whose haunting, saucer-eyed expressivity would have been a blessing in any era of moviemaking, to understand how the moving image could directly reproduce what literature and radio could merely explain, and what the stage could only exhibit from a distance. Early auteurs came to rely on silent actresses like Gaynor, Brooks, Falconetti, and Lillian Gish, among numerous other innovators who are now merely regarded as trivia items, to convey the pathos of a story across their demonstrative faces, often framed in vivid close-ups that could catch every single movement, no matter how muted. Before audiences could hear the people they saw on screen, an actress' face was as valuable and economical a storytelling device as any, saying all that needed to be said with just one look.

You can see this history encapsulated in some of the other performances nominated for Best Actress this year. In Jackie, director Pablo Larraín and cinematographer Stéphane Fontaine film Natalie Portman's Jackie Kennedy almost exclusively in close-ups, the most memorable (and showy) of which is a tight and gruelingly sustained shot of Portman heaving with sobs while rubbing her husband's blood off her porcelain face. Stone functions as something like an emotional compass for La La Land, which frequently pauses its dizzying montage to focus on the actress' face, so luminously detailed it could seemingly be rendered through animation, as it blossoms with joy and crinkles with despair at each narrative turn.

Negga’s physical contributions, which prize restraint above all else, are at once the most distinctive of her category and the ones easiest to underrate. By avoiding histrionics in every single aspect of his historic recreation, Nichols risks a certain solemnity that leaves it up to the viewer to probe the film’s stoic surfaces and locate the profound feeling concealed underneath. At times, this can be a hindrance to a spectator’s deeper connection with the well-known but scarcely dramatized material. But Negga is Nichols’ most constructive asset in bridging this divide.

With her slightly sunken, almond-shaped eyes and soft, protruding features, Negga possesses a face that, like Gaynor’s, is flexible and particular enough to disappear into any period of filmmaking. Nichols clearly realized the gift he had in Negga, which is probably why Loving opens with a prolonged shot of her extraordinary face, caught in profile and dimly-lit as Mildred prepares to tell Richard she is bearing his child. Negga says little and hardly moves a muscle, but the indecision on her trembling face is nonetheless entirely discernible. This shot sets the mode for Loving’s overarching tone as well as Negga’s performance, which radiates a similarly hushed stillness across all areas of the picture as Nichols and cinematographer Adam Stone turn to her, again and again, for the sort of close-ups that Gaynor, in her time, would invest with radiant, teary-eyed tenderness. Negga, however, opts for something tougher, refusing to wear her heart on her sleeve at all times.

Negga’s performance captures the lightning of Mildred’s love for Richard, as well as the wearying turmoil of their ensuing legal battles. But by bottling up this intensity and minimizing her own presence, Negga also captures the physical reality of a black woman living in a region entrenched in Jim Crow bigotry, an essential task as her film gazes back at far more circumspective times. In public, Negga’s Mildred tends to keep her eyes low and her smiles small, using these subtle mannerisms, in addition to her subdued physical carriage, to evoke a history of forced compliance in one’s everyday existence. With Richard or her family, Negga allows Mildred to be somewhat more generous with her outreaching displays of worry and joy. But these are hardly lavish demonstrations and they still preserve the character’s fundamental taciturnity.

Even in what are easily Mildred’s most private and solitary moments, in which the character receives two separate pieces of pivotal news by phone, Negga formidably maintains her delicate reserve. Nichols honors this decision, training his camera on her face as conflicted responses ripple ever so gently across it. To the naked eye, it might seem like Negga is doing next to nothing in each of these scenes. But look closer at the concentration covering Negga’s face — her gaze rooted to the spot, cheeks flushing — and you can detect the existence of deep inner thought, the process or complexities of which are never spelled out, purposely so.

Negga leaves a palpable space between Mildred’s journey and the viewer’s experience of this journey, preserving an elusive air in a genre that hardly has time for individual mystery, much less subtlety of such skillful and deliberate variety. In doing this, Negga lends her scenes a unique and disquieting tension that Loving itself could occasionally use more of. But much more crucially, she enlists the viewer to actually fill in these self-imposed psychological gaps between audience and actress. Negga withholds just enough in her reaction shots and centerpiece close-ups to secure our involvement, leaving it up to us to decipher what Mildred might be thinking, while respecting her privacy enough to not draw us entirely into her mindset.

Such instincts deepen the most poignant parts of Negga’s interpretation of Mildred, if not the overall film, which sometimes requires Negga to do nothing more than beam with warmth at Edgerton's rough-hewn affections or furrow her brow in consternation at yet another setback. Negga softens these moments, too, letting them flicker and glide with ease across her graceful facade, yet never sacrificing the voluptuous feeling that guides her character’s obstinate perseverance in this most trailblazing matter of the heart. Her performance is not stripped of sentimentalism, but insists on expressing such a sensation through quieter, more disciplined means, summoning a casual sense of closeness to Edgerton that we, as spectators, are fortunate enough to witness from a distance.

By astutely acknowledging Gaynor’s emotive template but finding her own way to fill it, Negga speaks to the mind and the heart, showing us that an actor’s face is not insignificant but integral to the art of screen acting, as well as the emotional response of an audience. She reminds us that, even after a century of technological advancement, there is no more spellbinding special effect to be found in all of cinema than the human face.